Paul Horn began playing the piano at the age of four, the clarinet at ten, and the saxophone at twelve. He studied the clarinet and flute at the Oberlin Conservatory of Music in Ohio, earning a bachelor's degree. He gained a master's degree from the Manhattan School of Music. Moving to Los Angeles he played with Chico Hamilton's Quintet from 1956 to 1958 and recorded his debut album Something Blue in 1960. By now an established West Coast session player he played on the Duke Ellington Orchestra's Suite Thursday and worked with Nat King Cole, Tony Bennett and others. In 1970, he moved with his second wife Tryntje and two sons Marlen and Robin from his first marriage to Victoria, British Columbia on Vancouver Island

Bastards under the Mistletoe

The holidays and jazz go together like milk and cookies left out for Santa. You're not sure if they're going to be taken or will still be there getting warm in the morning, but it's the spirit of the thing that matters. In this very special episode, the boys look at various holiday jazz offerings (three ... 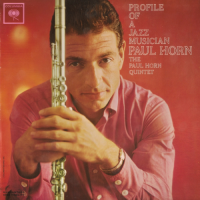 In 1962, TV producer David Wolper launched his Story Of series, an early biographical documentary program that examined on a single subject. In a 1963 episode, Wolper profiled Los Angeles flutist Paul Horn. Wolper, of course, would go on to produce Roots, The Thorn Birds, the film Wattstax and many others. Here's The Story of a ...

By John Pietaro I was heartily saddened by the sudden unexpected phone call: downtown’s unsung hero of Free Jazz, Will Connell, Jr., was hospitalized and non-responsive. Immediately the jazz and new music community rallied and the outpouring of love for Will was apparent. We’d all been preparing for his big moment at the front of the ...

The eclectic, even eccentric musical tastes of German, Netherlands- based flute master Mark Alban Lotz may be attributed to his personal history. He grew up in Thailand, Germany, and Uganda, while studying jazz, contemporary music, and Indian bansuri flute playing in Amsterdam, New York, and jny: Los Angeles. This globe-trotting biography is reflected in his flute ...

Paul Horn, a West Coast saxophonist, clarinetist and flutist who added edgy sophistication and nocturnal cool to chamber jazz ensembles in the 1950s and went on to pioneer World jazz in the '60s and beyond, died on June 29 after a brief illness. He was 84. Horn began recording with the Sauter-Finegan Orchestra in 1956 but ...

More blast from our past: Jazz Backstage. Read on.