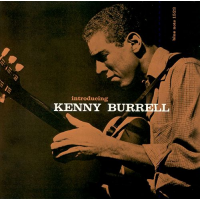 I really like Kenny Burrell, and I really want this CD. It's a great record. You just can't buy it easily or cheaply, at least not on Blue Note.

First, consider the record and the artist. Kenny Burrell is the quintessential cool jazz guitarist, whether leading his own group or playing with an organ trio. And here we have Burrell's very first album as a leader, Introducing Kenny Burrell, recorded in 1956 with a terrific bop lineup: Tommy Flanagan on piano, Paul Chambers on bass, Kenny Clarke on drums, and Candido Camera on congas.

The album starts with a real barn-burner, "This Time the Dream's On Me," a fast and fun romp with Burrell wailing on the 6-string and Candido setting a hot pace on congas. Next is a change of pace, a mash-up of classical and jazz called, appropriately, "Fugue 'n Blues," sounding very much like something written for the Modern Jazz Quartet.

Finally, three very different songs to end the CD. "Blues for Skeeter," as the name implies, is a slow blues. "Get Happy" is, yes, the same song that Judy Garland made famous just a few years earlier in the movie Summer Stock, but this time taken at a blistering pace—and with a conga solo! Burrell ends the affair with something soft and sentimental, an unaccompanied solo guitar on the George Gershwin classic "But Not For Me."

So, a great album. Now, try buying it.

If you want the original Blue Note CD, you'll pay dearly for it—or take your chances on an order overseas. Amazon has a 2-CD set called Introducing Kenny Burrell: The First Blue Note Sessions. But it's $100 new and $26 used. You can download an MP3 version for just $11.49, but I'd rather have a hard copy.

There's an import version of Introducing at $20 used or $34 new. Can it get cheaper? Well, a bunch of foreign copies sell for $12 used, plus $4 for shipping, but they ship from Japan and German. Not sure I want to chance that.

I settled for an inexpensive foreign two-fer that contains Introducing Kenny Burrell and 1961's Weaver of Dreams, both featuring Burrell and Flanagan. Weaver has the added bonus of Burrell singing every track, swinging hard, with a surprisingly good voice, sounding not far from Nat King Cole in his trio days. You can get it for under $10.

All in all, a terrific CD—albeit not on the Blue Note label.

Availability: Hard to get as a stand-alone Blue Note CD

Cost: Under $10 used for an import two-fer package with Weaver of Dreams