By Greg Simmons
January 5, 2013
Sign in to view read count 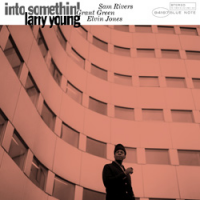 Organist Larry Young's Into Something is full of relaxed grooves, great melodies and strong performances from tenor saxophonist Sam Rivers and 1960s stalwarts Elvin Jones (drums) and Grant Green (guitar). Originally released in 1964, this record has been remastered and released on 45 RPM vinyl by Ron Rambach at Music Matters.

Soul Jazz? Groove Jazz? Whatever. It's good jazz and that's what matters. On the opening "Tyrone," Young plays deep blues at a straightforward, un-showy pace that gets enhanced and expanded, first by Green and then by Rivers who takes his saxophone the furthest out. Rivers, still a relatively new player here, hasn't reached the creative heights he'd hit in just a few years, but the pieces are clearly forming and his performance noteworthy.

Green's "Plaza De Toros" adds a little Latin rhythm to the date and provides the guitarist an opportunity for an extended workout. Like much of Young's playing on the date, he says more with less, eschewing flame-thrower licks to stay close to the rhythmic core of the song. Rivers plays with unusual attention to the melody, even as he clearly shows the greatest willingness to play hard. The consummate Jones taps out what, on the surface, sounds like a pretty tame backbeat. But careful listening reveals that he's actually doing three things at once: tapping the basic rhythm on the ride; adding a polyrhythmic round fill on the toms; and then throwing sharp fills into the short breaks. This isn't a thunderous drum performance. It's much subtler than that, but it's fully up to the standards expected from one of the era's premier drummers .

"Paris Eyes" is a funky, happy melody that provides Rivers with the first workout. He plays it loose, with a fair amount of breath through his horn, but flows along comfortably within the organ groove. It's too bad he doesn't get more time on the microphone, stepping off for Green to take his turn just when he's getting hot. But, then, there's that old saying: always leave them wanting more.

The Music Matters pressings are all about wringing the most sonic information from the original master tapes. The series has been wildly successful at presenting these old Blue Note titles with better fidelity to the master tapes than they've ever exhibited before. Into Something upholds the series' standards nicely, with dead quiet vinyl and exemplary sound quality. A Hammond B3 has rarely sounded this smooth.

Into Something digs a little deeper into the Blue Note catalog, but it's a good thing that Rambach went this far. This is a great, classic, mellow groove record that's worth hearing in the best possible light.