By KURT GOTTSCHALK
April 5, 2003
Sign in to view read count

Musicians, engineers, art designers, everybody made money except the founders.

“We didn't want to have a label. We told people we would do one record, maybe two."

So says Patrik Landolt, executive director and one of the founders of the highly regarded Swiss label Intakt. Landolt was working as a journalist at the leftist weekly he founded (and still edits) 17 years ago when the first Intakt record was released. On top of that, he was organizing the Taktlos Music Festival. He wasn't looking to start a label on top of everything else, he said, but just to get some of the tapes of pianist Irene Schweizer he had from the festival pressed to vinyl.

"We had so many recordings of Irene," Landolt said. "We sent the tapes to many labels and nobody was interested. It was a time when Irene was really underdocumented, and Irene is really a symbol for the whole lesbian movement in Switzerland.

"The label started to feature Irene," he said. "[Catalogue] number 1 was Irene at Taktlos." In fact, eight of the first 10 catalogue numbers are Schweizer, including a landmark series of duets with drummers Han Bennink, Louis Moholo, Günter Sommer, Andrew Cyrille and Pierre Favre. The piano/drum series was considered important enough to the label that catalogue numbers were reserved.

"I've played drums for many years," Schweizer said in an interview with Landolt published by Intakt. "Even as a girl this instrument attracted me. In my parents' restaurant there was dance music every Saturday night. Sunday mornings, I would sneak into the dance hall, sit down at the drum set and try to play. I like the way the hands move as well as how hands and feet are independent. Playing the drums is very physical. It's a bit like dancing. Many people say that I play the piano very percussively. I'm fascinated by rhythm."

What began as a spotlight for Schweizer, however, has developed into a remarkable chronicle of European free improvisation and international experimental music, with the pianist now sitting on the label's advisory board. Intakt just put out its 80th release, a double disc of Barry Guy/Evan Parker duets. The catalogue also includes titles by Jöelle Léandre, Peter Kowald, Christian Marclay, Thurston Moore, Elliot Sharp, Eugene Chadbourne, Jon Rose and the trio of Hans Koch, Martin Schütz and Fredy Studer. Upcoming releases include a new recording of the Globe Unity Orchestra, two improv sets by Cyrille and Anthony Braxton, and a trio with Cyrille, Schweizer and David Murray. On his wish list, he said, is a Schweizer/Elvin Jones duo, but no plans are in store to add to the piano/drum series as yet. It's a far sight from the vision, or lack thereof, they started with in 1986.

"The first 15 years we worked completely without money," Landolt said. "Musicians, engineers, art designers, everybody made money except the founders."

Without the government and corporate funding that helps to support some other European record labels, Intakt poured all profits into future recordings. Only with the help of a few consistent sellers has Landolt been able to create a part-time salary for himself in the last two years. The strongest sellers, titles that have moved more than 2,000 copies, include two volumes of solo Schweizer, Barry Guy's London Jazz Orchestra, Cecil Taylor's The Willisau Concert, Lindsay Cooper's Sahara Dust and David Moss' My Favorite Things. For the last seven years, a subscriber service has also helped to generate income. About 300 listeners have signed up to purchase every new Intakt title direct from the label for a 30 percent discount. At best, about one-fourth of the sales for a given title might be in the U.S., according to Landolt. For others, it can be less than three dozen. Landolt credits distributors like North Country, who are willing to promote musicians without much American following, with what stateside success they've had.

But a seeming lack of local support for Swiss new music was on display some nights at Tonic last month, when musicians outnumbered audience members for an otherwise remarkable week of concerts featuring musicians like Koch-Schütz-Studer, Sylvie Couvoisier, Dorothea Schuerch, Stephan Wittwer and Jacques Demmiere, all of whom have recorded for Intakt. The After Yodel festival at Tonic, part of the larger Swiss Peaks arts festival in more than two dozen venues around the city, was organized by turntablist Christian Marclay, who was born in California to a Swiss father and American mother, and grew up in Switzerland. According to Marclay, the exchange of support between European and American new music has largely been one-way. 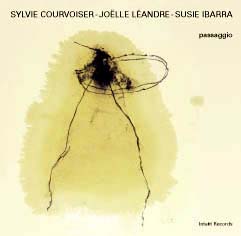 "My colleagues here, throughout the ‘80s and ‘90s performed a lot in Switzerland or have recorded on Swiss labels like Intakt, For4Ears, Hat Hut and Rec Rec," Marclay said. "Of course, it's easier to get money for culture in Europe in general, and Switzerland, being a small country, is always trying to promote its culture."

In that effort, a wide range of corporate sponsors lent support to Swiss Peaks, a nonprofit arts organization based in New York that organized three months of gallery shows, film screenings and concerts to showcase the arts of Switzerland.

"New York is considered the cultural capital of the world," Marclay said. "People are always wanting to come here and show what they can do, but the small clubs can't afford to do it. A place like Tonic can't afford to bring people in. They work on a very small margin."

Whether or not American support grows for the consistently strong released Intakt puts out, generally six or eight a year, the label is dedicated to continue putting out the albums that Landolt sees as not just recordings but documents of the time.

"Most of our CDs have long liner notes," he said. "The package is very important. We have traditional jewel boxes, but we spend a lot of money on the booklet, on the liner notes, on the translation. "It's a reflection," he added. "Music, for me, is seismic. You can read on the music the feeling of the times. This is important to me."

Kurt Gottschalk is the editor of The Squid's Ear .