By DUNCAN HEINING
August 3, 2018
Sign in to view read count 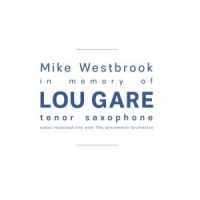 Best known for his work with the experimental, avant-garde collective AMM Music, Lou Gare began his career in jazz in the early 1960s, playing in one of Mike Westbrook's early groups. In more recent times, in Devon, he reconnected with Westbrook and became a stalwart member of Westbrook's orchestra and an inspiration to its younger musicians. I was fortunate enough to see Gare with the band on two occasions and remember with fondness the quiet drama of his presence and playing.

The album features nine solos from Gare recorded between 2010-2015. Some are extracts such as his beautifully poised and lyrical take on Billy Strayhorn's "Lush Life." I was at the gig and it sounds even more lovely to hear it again. Each track is a little master-class of its own. Listen to how he elbows his way out of the ensemble (albeit, politely) on Westbrook's tumultuous arrangement of Chris McGregor's "Manje." The opening duet with bassist Marcus Vergette on Rossini's "The Barber" (from The Westbrook Rossini) is another delight. But with the entry of the whole rhythm section, Gare steps up a gear into something that is slinky and down-home funky. A big sound, authoritative but never ostentatious.

The meat of the record lies in two very, very different takes on Westbrook's "D.T.T.M," itself a dedication to two other friends who left town a while ago (violinist Danilo Terenzi and drummer, Tony Marsh). The first, features a long, eloquent cadenza before opening out into the ballad with first the rhythm section and later the band. The second is more a chance to hear Gare's horn in an orchestral setting. He was a remarkable musician, perhaps better known and better appreciated by other musicians. In Memory of Lou Gare gives the rest of us a belated opportunity to catch up.

All About Jazz: Lou Gare played in your first group in London in 1962. How did you first meet?

Mike Westbrook: It was probably in 1962 that three members of my Plymouth band—John Surman, Keith Rowe and I—moved to London. The others couldn't or didn't want to move. We started trying to form a band on similar lines. We want to gigs and generally asked around. I can't exactly remember how or where I first met Lou or Mike Osborne. It might have been through the big band that saxophonist John Williams was running at the time.

AAJ: Lou left to pursue a different path in music. How did your paths come to intersect later in life?

MW: Very simply. Lou had been living in Devon for a number of years, not playing much but part of the local jazz community. When I decided to expand the Village Band and form a big band I sought advice. Lou's name came up and I invited him along to the first session at the South Devon Arms in Dawlish. We played my old arrangement of "Flying Home." The rest is history.

AAJ: Lou had a wonderful full tone, one of those 'big' tenor sounds but he deployed it with the subtlety of a Coleman Hawkins or Sonny Rollins. What for you were his special qualities as an improviser?

MW: Lou was certainly historically-aware. But he never toed the line. He was always questioning. If anything he was a follower of Rollins rather than John Coltrane. In his years with AMM, I think he went very deeply into improvisation musically and spiritually. He seemed to have no real concern with a musical career or any kind of commercial success.

Musically, I can only speak of his playing in the late phase of his career, when he played with The Uncommon Orchestra. He seemed to approach each solo with an open mind. He had no agenda, except to be free. He simply responded to whatever situation he found himself in. From whatever starting point he chose, he was able to produce long, unfolding lines of improvisation with no repetition, no clichés. Motifs might be developed for a while, timbres toyed with, then either be abandoned as some new thought caught his fancy, or morphed into something else. His playing over conventional jazz structures and chord sequences was highly unorthodox. I distinctly remember back in the sixties commenting to him on his solo on a blues, a solo that seemed totally unrelated to the chords but had some kind of logic. He told me he'd simply played his solo in another key, a tone higher than the accompaniment. The next step for him at that time was clearly totally improvised music.

With the big band, I felt that his approach to soloing was intuitive rather than theoretical or system-based. But I never asked him. To me, he seemed to have evolved an approach that I could only call 'chromatic bebop.' Any note could be used if the line he was following demanded it. It's still a risky business and I have to say that, for me, it didn't always work. Even to someone like me, interested in the 'wrong notes,' he occasionally pushed things beyond the limits of credibility. But he was absolutely right take things to the limit. And, however obliquely, he always related to the particular musical structure.

AAJ: Your band, The Uncommon Orchestra, combines professional and semi-professional musicians, some older and some much younger. How did Lou contribute to the development of the band's identity as a working unit?

MW: Lou was greatly respected. Laid back, kindly and with a laconic sense of humour, he took his place in the sax section with dignity and humility. One of several major soloists in the band, Lou's improvisations were endlessly surprising and challenging. He brought a quiet authority into the band. His ease of manner concealed a deep seriousness and commitment to playing. This came out in his solos where he showed that however free you think you might be, you can always go further.

AAJ: If you could some up Lou as a musician in a few words, how would you do so?

MW: Simply? One of the greatest improvising musicians of our time.