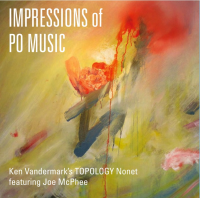 Food scientists know that human taste buds favor three items, sweet, salty and fat. Although abundant today, our prehistoric ancestors scavenged for these scarce commodities. A musical arranger, like a great chef, can serve up delectable music by skillfully combining the three tastes.

Our chef, the musical impresario Ken Vandermark, organized this nonet tribute to Joe McPhee and his influential music by inviting the great man to record with eight Chicago musicians. All would probably name McPhee as their personal demigod. Vandermark presents McPhee's music and his arrangements for the TOPOLOGY Nonet. The draw here is Vandermark's talent for organization, and the possibilities of McPhee's compositions.

Vandermark scoops huge chunks from McPhee's Po Music Oleo (HatOLOGY, 1982), beginning with "Impressions Of Astral Spirits/Age" that combines the sweet science of organized sound and a swirling cauldron of energy. Drummer Tim Daisy manages to keep all the plates spinning throughout with his unlimited supply of animation. Likewise, "Impressions Of Eroc Tinu" balances near entropy with some crafted soloing. Vandermark's arrangements avert the anticipated meltdowns, allowing the pieces to rise above the mayhem.

The meat of this session is the interplay between McPhee's open compositions and Vandermark's orchestration. Certainly the cast of solid improvisers recognize the tug of improvisation and the pull of organization. On "Impressions Of Future Retrospective" the Nonet exercises a pulsing blues ringing with vibraphonist Jason Adasiewicz's metallurgy and cellist Fred Lonberg-Holm's relentless attack. Vandermark weaves the music with searing solos from cornetist Josh Berman, saxophonist Dave Rempis and McPhee himself. The band moves from the heavy to quiet on "Impressions Of Sweet Dragon" featuring the interplay between Lonberg-Holm, trombonist Jeb Bishop and Vandermark, on clarinet. The shortest track (at 4:47), "Impressions Of Goodbye Tom B.," is an unaccompanied tenor duet between McPhee and Vandermark. Taken from the landmark solo recording Tenor (HatOLOGY, 1977), the piece recreates feverish excitement of that remarkable time.