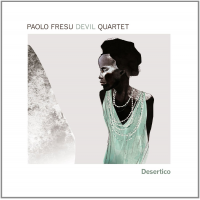 Italian trumpeter Paolo Fresu has always been more angel than devil, though he's fronted quartets that name check both of those respectively heavenly and hellish entities. His horn work is coolly lyrical and spellbinding, regardless of the setting it's found in, but Fresu also has an impish side to his personality that takes over at certain times; he taps into that deviousness in a few places on Desertico, but the majority of the music is gorgeous, reflective and peaceful.

While Fresu embraces the calm in many a place on this album, he doesn't start things off in a quiet space; the brash-and-bold side of the trumpeter comes out to play right away on a metrically twisted take on the The Rolling Stones' "[I Can't Get No] Satisfaction." Guitarist Bebo Ferra and drummer Stefan Bagnoli establish themselves as the primary aggressors here, stoking the flames beneath Fresu, who's more than game to play things their way. Music of a gentler nature—"La Follia Italiana" and "Ambre"— emerges after this romp-of-an-opener; both numbers find Fresu's stop-you-in-your- tracks horn work at the center of the scene(s), but Ferra's acoustic guitar also emerges as a key element in the mix.

The program continues with a bright and joyous tune in five ("All Items"), an introspective take on a classic ("Blame It On My Youth") and a piece of post-millennial, fusion-istic spy music built on a bedrock bass riff provided by Paolino Dalla Porta ("Desertico"), but none of those pieces pack the punch of the album opener. "Voci Oltre," which appears near the end of the program, is the only performance that matches the intensity of "Satisfaction," even surpassing it on the zaniness scale. Once that number concludes, it's back to beauty. Fresu and Ferra make absorbing music on "Young Forever," which comes and goes in under three minutes, but the medley of "Ninna Nanna Per Andrea" and "Inno Alla Vita" proves more substantial, both in length and substance. Ferra's work here shows a debt to Bill Frisell's pastoral guitar work, andr all four musicians connect in all the right ways during this bucolic closer.

While the title of the record points to the dry, arid and lifeless spaces of this world, the songs are anything but. Fresu and his Devil Quartet create music brimming with life, clarity, sensitivity and strength; Desertico is a musical oasis, not a barren desert.

[I Can't Get No] Satisfaction; La Follia Italiana; Ambre; All Items; Blame It On My Youth; Desertico; Suite For The Devil; Poetto's Sky; Voci Oltre; Young Forever; Medley: Ninna Nanna Per Andrea and Inno Alla Vita.