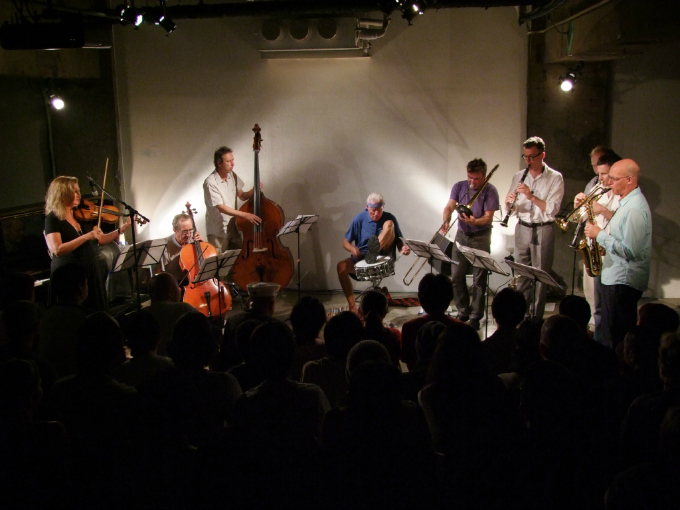 Despite a cold and damp Sunday night in January, a packed house came to hear a stellar group of musicians from the Netherlands for a performance at the FringeArts Center in the Old City section of town. This collective of seasoned and versatile musicians call themselves the ICP or Instant Composers Pool, and they embody guitarist Jim Hall's broad definition of jazz as (virtually any) improvised music as opposed to adherence to the particular genre or structure of traditional jazz. Some would call it free or avante garde jazz, but these labels don't quite fit ICP. What they do is to take a few preconceived ideas, whether a melody or a style, put a small amount of structure around it, and then go with whatever comes up. Sometimes the result is swing, sometimes it's bop, sometimes it's in a classical mode, sometimes it's avante garde. Whatever it is at any given moment, it's great music because these musicians know their instruments, know the music, know each other -and have an uncanny ability to shape the music in lively, spontaneous, meaningful ways that don't require great sophistication to enjoy.

The ICP were themselves graced to have the services of Philadelphia's own Uri Caine on piano, substituting for their legendary ICP leader, Misha Mengelberg. Caine provided some stunning, an—for him—conservative piano work that matched perfectly with the ensemble and enriched the sonority of the group. Caine can be as radical and experimental as anyone, but in this performance, he pulled the group back to mainstream roots whenever they seemed to deviate to parts unknown. Indeed, this is a group that has to be reigned in, as they feel justified in doing whatever comes to their minds, no matter how absurd! For example, the (astonishing) drummer, Han Bennink, at one point played the top hat drum with the heel of his foot! And the cellist, Tristan Honsinger, who looked from a distance a bit like Woody Allen, decided to become the conductor and cavorted around the stage like a hunchback cattle rancher rounding up the scattered herd. But when it came to the music, everyone played with remarkable skill, virtuosity, resilience, imagination, and an obvious knowledge of every genre of music from the 1920s "Jazz Age" to modern composers like Poulenc, Stockhausen, and Steve Reich.

The music was sometimes brilliantly conceived, and the variety pleasurable, like the tasting menu of a blue-ribbon restaurant. They played several pieces that conveyed the feeling of the 1920s-30s pre-swing big bands, one in the style of Kurt Weil, another that paraphrased the song, "Alexander's Rag Time Band," and a finale called "Moten Swing" by Benny Moten, which included some big band vocal chants. Herbie Nichols' "Party Starting" served as a nod towards the avant-garde, and by sharp contrast, a modern string trio, entitled "Kabul," consisting of Oliver on violin, Honsinger on cello, and Ernst Glerum on bass, could have been composed by Shostakovich but, amazingly, was totally improvised on the spot. Then there was a gorgeous jazz-style lament featuring Oliver on violin, Thomas Heberer on trumpet, and Ab Baars and Tobias Delius on clarinets. Perhaps the most swinging number was a homage to Thelonious Monk that featured the entire ensemble and sounded like a reincarnation of the Monk's fabulous Town Hall big band concert. The overall effect was to shake the music out of its complacent stereotyping of genres in a way that was simultaneously entertaining and thought provoking, as if to say, in the words of Billie Holiday, "God bless the child that's got his own."

The act that opened for ICP, the Ken Vandermark/Nate Wooley Duo, were more modest yet at the same time more radical in their aims. Both have made names for themselves among the avant garde cognoscenti in New York, Vandermark on reeds, and Wooley on trumpet. Vandermark, a fixture on the Chicago-area music scene, and a 1999 MacArthur Fellow, has earned critical praise for his playing compositions. Wooley is an in-demand trumpet player in the burgeoning Brooklyn jazz, improv, noise, and new music scenes. He has performed regularly with John Zorn, Anthony Braxton, and many other innovative musicians.

In this performance, they were like a pair of poets creating verses of music with all the sounds their instruments can generate, including tones, clicks, and squeals as a vocabulary. They made bizarre clicking and sucking sounds and atonal Schoenberg-type lines that would have made even Ornette Coleman grit his teeth. Incredibly, their extraterrestrial playing was somehow enjoyable and accomplished what jazz does best, telling stories. For example the Wooley original, "Killtown" conveyed the historical chaos and criminiality of Wooley's birthplace, Jersey City, with cinematic flair. And Vandermark's "Deconstructed Folks" somehow held on to the jazz classic "Old Folks" for dear life. These two tunes, and some others from the concert, including Wooley's "General Sherman," and John Carter's "And She Speaks," are available on their new CD, East by Northwest (Self Produced, 2014), which, for those wanting to stretch their musical reach, might be well worth a listen.