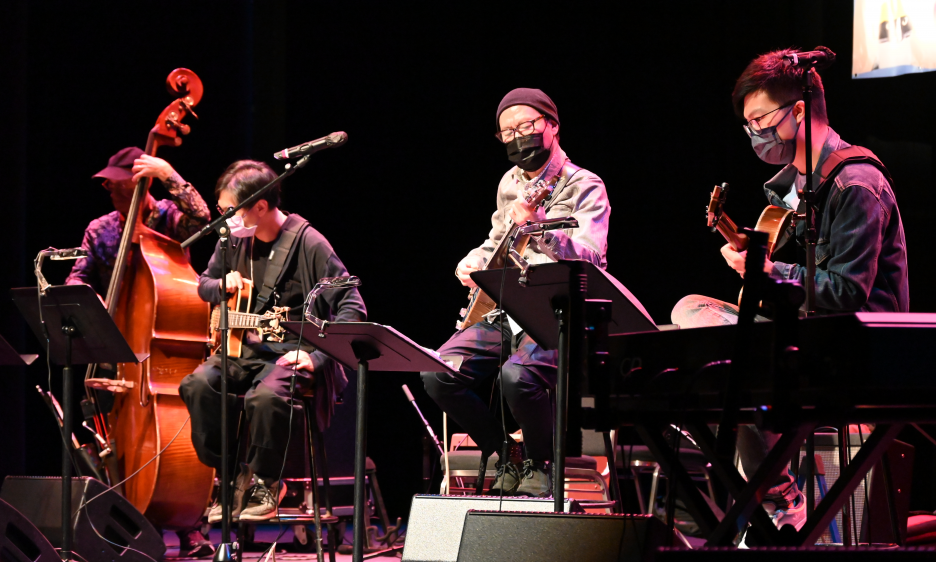 Forced to restrict programming to locally based musicians, the always enjoyable Hong Kong International Jazz Festival's greatest surprise this year came early in Chi Chau's Choice, a super-ish group of HK luminaries assembled by Wilson Lam. Named after the guitarist's Chinese given name, the quartet's opening set was smart and subdued, defined by elegant airiness and reflective rumination. Showcasing exclusively original material from across the band's members, there was an evident emphasis on Lam's reverb-heavy arpeggios and lingering, pastoral compositions, which drew from somewhere between the Pat Metheny and Bill Frisell schools of elegant note-scaping.

These were bolstered by sympathetic contributions from established pianist Patrick Lui and bassist Wong Tak Chung, alongside the unlikely appearance of the city's best-known pianist Ted Lo on drums, proving to be an able, inventive if not unshakeable sticksman (as well as offering the live debut of a knotty new composition, "Land of Light," marked by sudden stops and shape-shifting time signatures he claims were penned just last week).

However, this 13th annual festival was all about Hong Kong's other undisputed jazz totem, Eugene Pao (both men hold the distinction of having a dish named after them at the City's Fringe Club—try the Eugene Bao or Ted Lo Soh if you're ever in town). The guitarist was honoured as the festival's artist-in-residence, either to explain or excuse his presence in no less than four of the six line-ups presented. Most excitingly, Pao joined Lam and fellow six-stringer Alan Kwan in the grandly dubbed "3G Guitar Trio," seemingly a simultaneous head nod to both the celebrated acoustic three-ways of Al Di Meola, John McLaughlin and Paco de Lucia, and the electric nerd-outs led by Joe Satriani, Steve Vai and Co. Perhaps that, too, explains the awkward dichotomy of the trio's set: an opening salvo of unplugged, unaccompanied original pieces demonstrated the players' harmonic ingenuity, generosity and sympathy. Intuitively passing solos and comping chords around, Lam's echoey, effects-enhanced ruminations found a counterweight in Kwan's traditional hollow-bodied boppiness, all balanced by the nuance of Pao's straightforward, bluesy bravado. However when the group got up from their stools to be joined onstage by a rocky rhythm section, the whole thing descended into an exhausting exercise in widdly fusion licks and sly one-upmanship.

A day earlier, Pao got to kick back and stretch out on the less demanding material of The Organ Trio, a lazily named troupe led by American keys player Bob Mocarsky. Backed by drummer Anthony Fernades, the barroom program of bop and blues was perked by the inclusion of Herbie Hancock's "Drifitin'" and Bob James' "Angela," which brought out some of Pao's most fluid playing. Earlier that same night Pao played what appeared a journeyman role in the band of former Miss Malaysia Universe Sherine Wong's set of smooth ' n' smoky, blues n' ballads—which may have cooked only slightly above room temperature, but were often delivered in a sweet Mandarin voice that seemed a surely cynical bid to target mainland China fame.

The highlight of Pao's four-band stand however was his relatively reduced role in the barnstorming Blaine Whittaker Group, who closed the two-night affair with a strong set of robust modern bop, defined by hummable but original hooks, dynamic execution, and the muscular freewheeling improvisations of the leader. From the Latin flourishes of opener "Project Rainbow" and the funk blues strut of "Fig Jam," to the perky, stop-start, mid-tempo nod of brand new tune "Red Jezebel" (named after a local butterfly), this was top class jazz, which did nothing new but everything right, a rousing finale to a makeshift, pandemic-era festival making do with the best of what the city has to offer.