BY GARETH THOMPSON
November 19, 2021
Sign in to view read count 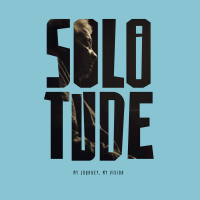 Abdullah Ibrahim once told a seminar at his M7 Academy in Cape Town, "The devil lives on the stage. This is where the ego comes out." On the strength of Solotude, recorded live on his eighty-sixth birthday, Ibrahim has crushed such personal demons and now lets angels guide his performing. One takes his point though, given that even the most spiritual music needs some sense of conceit to create and promote it. But this is an artist with nothing left to prove or justify, having laid down musical markers since emerging on record as Dollar Brand in 1968.

Solotude is neatly titled, with its aching sense of seclusion and repose. The record was made at Hirzinger Hall in east Germany, during the 2020 lockdown, with no audience beyond a technical crew. If anything, this format works better as each piece is left framed by brief silence rather than applause. The only background noise is actually supplied by Ibrahim with his occasional grunts and gasps of concentrated pleasure. Just possibly they could be groans of annoyance at a fluffed note, inaudible to any but himself. But more probably Ibrahim was captivated in the moment at his piano, just as the listeners are left enrapt.

The opening cut, "Mindif," is one of several which he revisits from a stellar career. Shorn of its previous orchestration, the track's blend of mystic light and golden silence sets a tone; also the album's most spectral cut, it echoes some of Espen Eriksen's noirish turns. "Trieste My Love," reworked from Dream Time (Enja Records, 2019) conveys a sweet sense of longing, while the playful rolls and jabs of "Nisa" are distinct from the brassy rendering on The Balance (Gearbox Records, 2019).

More geeky fun can be had with hearing "District 6" retain its funky swagger from the vibrant African Magic album (Enja Records, 2002). Elsewhere, a stark version of "Sotho Blue" supremely mimics the original's haunting sax and flute parts. Trying to unravel Ibrahim's sonic secrets is probably futile, though his fingertip sensitivity and use of sustain are evident on the romantic contemplations of "Blue Bolero" and "Once Upon A Midnight." Further, several short fragments, such as "Peace," "Blues For A Hip King" and "Tokai," echo a philosophical quality found in Franz Liszt's more intimate works.

Ibrahim presents one of his most enduring songs, "The Wedding," near the end like an encore. New numbers include the rhapsodic "In-Tempo" with its ripples of trilling birdsong, plus the closing cut, "Signal On The Hill," which brings a final note of serenity.

The meditative strength of this outing is born of one who recognises martial arts, medicine and movement as key elements. Ibrahim offers his symphonic poems to us here with quiet reverence. Who could refuse such a gift?