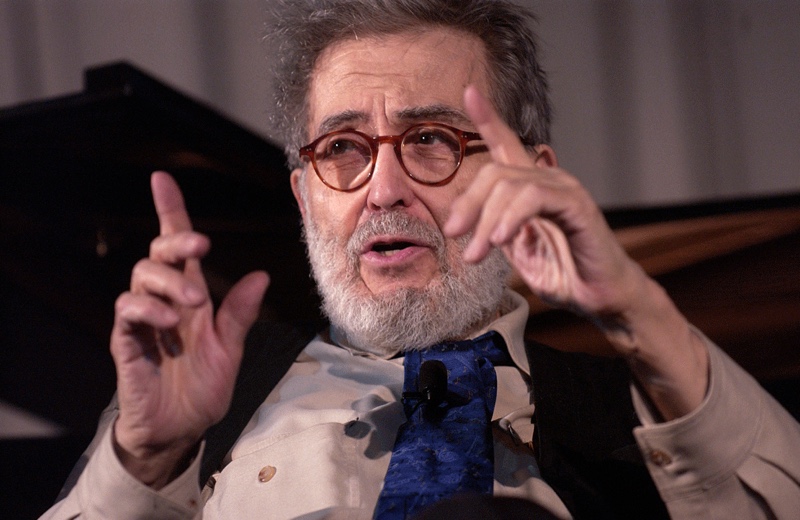 BY JIM TRAGESER
January 12, 2017
Sign in to view read count
Nat Hentoff's passing last week left me feeling, well, old. Whenever we lose a mentor—a grandparent, a teacher, someone who encouraged us—it's a reminder of our own mortality, that we are, in the parlance of football coaches, the next ones up.

I don't feel anywhere near to ready or worthy or capable of assuming even a sliver of Hentoff's prodigious mantle, and yet the only way to honor a mentor is take up their work and carry it forward.

But honesty compels us to admit that Hentoff's absence will be felt throughout the jazz (and free speech and civil liberties) world. His knowledge is—outside what he left us in his books, articles and liner notes—gone. That kind of loss can't help but make itself felt.

When I got word just about 17 years ago that Stanley Dance had died, that, too hit like a ton of bricks. While Hentoff had been encouraging via correspondence, I had gotten to know Dance in person—introduced by Jimmy Cheatham, and then running into Stanley and his wife, writer Helen Oakley Dance, throughout the San Diego area over the years. Stanley, like Hentoff, was always available to critique my latest bit of writing, to offer advice and guidance.

But the debt I owe to Dance and Hentoff is, in many important ways, far larger than the personal interest they took in a young man who decided he wanted to dedicate his life to writing about jazz and blues. It's a debt owed by every one of us who writes for, and reads, All About Jazz—and every other jazz and blues website and publication.

Dance, along with Leonard Feather, Barry Ulanov and George T. Simon, was part of that first wave of journalists who made it socially and intellectually acceptable to write about music largely created by and for an African American population. In every daily newspaper in the country, and in national magazines like Down Beat, Metronome and Billboard, jazz was chronicled throughout the Swing Era as one of the staples of American cultural life, alongside cinema and literature.

Hentoff, 15 years younger than Dance, was part of a group of younger writers (including Whitney Balliett and blues journalist Paul Oliver) who came along and carried jazz journalism into the age of bebop and free jazz.

And when swing began losings its place of primacy on the charts after World War II ended, and newspapers and general-interest music magazines lost interest in the new jazz styles emerging, that next generation of jazz journalists started their own magazines devoted to the music: outlets like Jazz Times, Living Blues and Cadence.

This is the heritage of All About Jazz, and those of us blessed enough to have the opportunity to write here.

It is also important to note the historic reality that so many early jazz journalists were white—covering an African American form. That most of the commentary and reporting on jazz has been provided by white males is an irony that does not reflect well on the larger industry in which jazz was born and grew up.

But despite limited publication opportunities and little money to be made, the above jazz journalists persevered, writing about an art form that touched their souls in a way no other form did. They interviewed the musicians, rubbed shoulders with the fans, spent far too much time in front of their hi-fi, and devoted unseemly amounts of wall space to their music libraries.

And, over time, alongside the musicians they wrote about, they helped create a culture that values jazz as an important part of the life of the intellectual. The expectation that to be alive in the world of ideas, one must have at least a modest knowledge of jazz. That jazz stands alongside literature, sculpture, drama and the other artistic endeavors that enrich human existence.

The simple fact of the matter is, without the efforts of Hentoff and his colleagues and mentors, All About Jazz simply wouldn't exist.

There is nothing in the nature of the world that guarantees jazz a place of honor in our cultural landscape. We should not take jazz journalism for granted, for it is writing about jazz that helps the music keep its place at the table.

And, still, not everyone thinks jazz journalism has value.

In 1988, the National Association of Jazz Educators (now JEN) held its annual conference in San Diego. I cashed out some vacation time from the twice-weekly newspaper I was working for (because my publisher had no interest in a national jazz conference right here in town), and got press credentials through the arts editor who, I think, liked my enthusiasm. I ended up practically living at the Town & Country resort hotel in Mission Valley those four days, taking in every performance, every workshop, every lecture I could.

I chatted up everyone I met—picking their brains about every aspect of the music I could. If I recognized them, I introduced myself and started a conversation. I even still have Feather's autograph on a program when I ran into him at the college jazz band national finals (won by the Berklee School of Music, featuring a young Delfeayo Marsalis).

But one seminar in particular from that conference has stayed with me all these years—that of Eddie Meadows, then a professor at San Diego State University, on the role of a jazz historian.

Meadows, who had taught a history of jazz and blues that I had taken, was speaking of the importance of how the biographical information of jazz pioneers would someday serve future historians and musicologists well, of how younger musicians needed to know the history of the music they were playing. He was particularly focused on the crucial role that oral histories can play in preserving the history of the music.

A few minutes into his presentation, a middle-aged gentleman began interrupting him. Hectoring him. Talking over him to argue, loudly, that every time a jazz fan bought a book or magazine about jazz, that was money not being spent on albums or concert tickets. That so-called "jazz journalists" were nothing more than parasites or thieves, stealing a living off the work and creativity of the musicians.

Being young and idealistic, I stood up and defended my professor. I asked this gentleman what he knew about Beethoven. He practically sputtered, asking what did that have to do with anything. "Humor me," I said, "Where was Beethoven living when he rose to fame?"

"Vienna!" he shot back. "Everybody knows that!"

How can you possibly know that, I asked, when you weren't there.

"It's in all the history books!" he shot back.

"How about that," I said, and sat down as Professor Meadows finished his lecture. (It was only after, when two elderly gentlemen came up, and one stuck his hand out and said, "I want to shake the hand of a young man brave enough to stand up to Ellis Marsalis" that I realized who I'd been tangling with. As my face went ashen, his friend started laughing, and said, "I told you he didn't know.")

But the point of sharing that exchange is to remind ourselves that even brilliant, passionate exponents of jazz don't always see the value in writing about jazz.

If I were able to go back to 1988 and be in that room again, what I would like to say to Ellis Marsalis and those who agree with him is this: I could make a lot more money writing about rock or rap or even country. But I want to write about jazz because I want others to discover it and get that same feeling I got when I first heard Basie's band blowing through a Neal Hefti chart, or saw Dizzy for the first time, or spent an evening listening to Charles McPherson at a sushi bar on a hill above the San Diego airport, or was a one-man audience at the Hotel Del Coronado as they closed the old Prince of Wales room and Peggy Claire, dying of cancer, sang for the last time in public when pianist Daniel Jackson saw us come in and insisted she join him. I want them to know that ethereal glow that comes when the music gets inside you, and you stop thinking about it and just let it wash over you and when it's done you're somehow a different person from who you were only a few minutes earlier, and it's a better person you've become and you can't wait until it happens again. I want to write about jazz and blues because when it's performed right it's a spiritual experience, and I want to help capture that because at some deep level I know it matters and is important—and God above gives all of us gifts and it seems my gift, however modest, is a talent with words.

That's what I'd like to tell Ellis Marsalis. I don't want people to spend money on something I've written in lieu of purchasing music—I hope if they read something I've written, it sparks in them a desire to experience first-hand what I've shared, that it provokes them into spending more money on jazz than they ever dreamed they would.

When I first started listening to jazz, it made me want to be creative—only I'm tone deaf and have less rhythmic impulse than Al Gore, and don't really feel the stories in me that a fiction author does. Then I came across Nat Hentoff's writing about jazz, and then Stanley Dance, and Leonard Feather, and being young and ambitious I thought, "Maybe I can do this, too—maybe I can contribute in this way."

Now, I'm obviously no Scott Yanow: I've written no books on jazz, I have—and have had for most of my life—a career other than writing about music, a career to pay the bills and put food on the table.

But I've also always written about the music—due in no small part to the example and inspiration of folks like Nat Hentoff and Stanley Dance. It's one small way to pay them back for all they have given us.