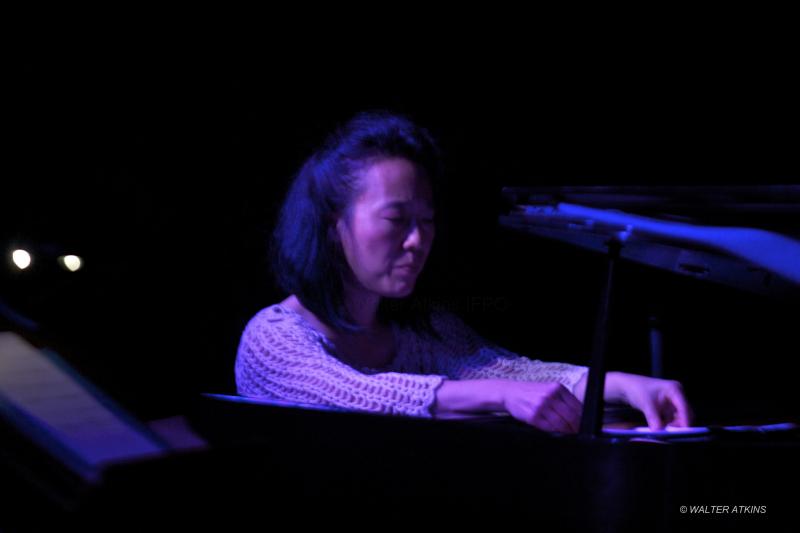 Prominent pianist Thelonious Monk was born October 10,1917 in North Carolina. Over his esteemed career, Monk played with the pantheon of jazz giants that included John Coltrane, Miles Davis, Charlie Parker and Dizzy Gillespie. He was also instrumental in the creation of Bebop. Monk's technique was uniquely inventive and also very demanding. Today, pianist Helen Sung and her band brought her revealing interpretations of Monk's iconic music to the cozy Sequoia Room At The Brewery Tap Room on Northern California's Mendocino Coast. Opened in 1988, North Coast Brewing is located in the historic seaside town of Fort Bragg CA. The microbrewery has produced a range of award winning beers, including a tasty Belgian style abbey ale named Brother Thelonious. The brewery has been an active supporter of many jazz institutions including the Monterey Jazz Festival and the Thelonius Monk Institute for Jazz Performance.

Born in Houston Texas, the proficient Sung was a graduate of TMIJ's first class. The Monk family, Maria Fisher and Thomas Carter founded the non-profit music education program in 1986. She started out as a classical pianist who later switched to jazz during college at the University of Texas, Austin. While her mother was sympathetic to her switch, her father ..."blew up." Sung stated she was "happy" she made the change. After listening to the dedicated musician/composer, the whole room would agree she did the right thing.

Doug Moody, NCB Senior Vice President, enthusiastically introduced Sung and her primed quintet comprised of: Sung, drummer Malachi Whitson, trumpeter Joel Behrman, tenor saxophonist Bob Reynolds, and bassist Dave Robaire. The robust brass front line was in good company with the rock solid rhythm section all night. Sung opened the festive evening with her energetic composition "Brother Thelonious" from her Anthem For A New Day (Concord Jazz). It was a lively song with an engaging sax solo by Reynolds. The brass section blew with confidence and the rhythm section stayed in the pocket throughout the spirited set. "Brother" was commissioned by the North Coast Brewery to celebrate the iconic pianist Monk and his legacy. Sung who lives on the East Coast was, "glad to see things thriving on the West Coast." She introduced her time keepers Whitson and Robaire on drums and bass, respectively. The pianist mentioned this was her first time performing with Behrman and the second time with Reynolds.

To set the direction for the evening, Sung announced, "We're here to celebrate Monk. Let's have fun." One of the first Monk tunes she learned in school was his famous signature "Straight No Chaser." "Come on man, let's go-very fun." She added her "wonderful rhythm section" and played with focused energy. For "Eronel," she described it as an "interlude" for piano and bass. She then shared the song's intriguing back story with the audience. One of Monk's band members brought in a song about his mistress. Monk said at least spell her name backwards. Her name was Lenore, hence the song's title "Eronel." Sung performed it with Robaire while the band sat out for a well-earned respite. The full band took the stage for the swinging "In Walked Bud." Reynold's sax solo was top notch.

She wrote the next song, "Hope Springs Eternally," also on her current album, .."as a response to feeling life was out of control." Sung had just made the move to New York, then 911 happened. Her song is a "delayed response" to that fateful day. Behrman sat out on this one. Drums and bass supported her long sultry piano solo. Reynolds added a smoky sax solo. Sung played with clarity while Robaire contributed a bass solo.

Sung said she "took a chance on this one as a "deconstruct/construct" of his peculiar "Epistrophy." The T. Monk/Kenny Clarke composition was noted for repeating the same notes in places." Hope you like this one." The track began with a muted trumpet intro and the sax contributed some great runs. Overall, Sung's treatment of "Epistrophy" provided one of the highlights of the set. She then moved into Percy Mayfield's stirring blues ballad, "Please Send Me Someone To Love." She slowed the pace down and Whitson's brush work was impeccable.

The pianist said, "Art civilizes humanity, hold onto as much of it as you can." In closing, she added, "Let's celebrate Monk's 98th birthday by sending you home with Dizzy's "Salt Peanuts." After the song, an appreciative patron said emphatically, "She can play," during loud applause. Another fan commented he could hear her classical chops in her playing. After reintroducing her quintet, Sung closed with a heart felt "Happy birthday to Monk." She concluded with, "Keep supporting live jazz at the Sequoia Room."

Helen Sung and her quintet adroitly executed an inspired set of Thelonious Monk classics mixed with fresh originals. The talented pianist and her colleagues also provided a marvelous way to commemorate the brilliant Monk on his 98th birthday in grand style. She definitely made the right career change.