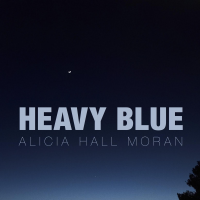 After years of orbiting, with projects ranging from a celebrated turn as Porgy's Bess on Broadway to her own Motown revue, Alicia Hall Moran has at last landed on Earth long enough to burrow nearly to its core in search of vocal identity on the debut recording, Heavy Blue. Here is a portrait not only of a singer, but also of one who sings, the difference being that the former adapts—mind, body, and soul—to the rhythms of an unstable world yet remains true to heart, while the latter pulls messages from the ground, dusts them off, and makes their ancient languages legible for the rest of us.

This is the truth behind "Deep River," which draws a genealogical line to Alicia's great-great-uncle, Negro spiritual preservationist Hall Johnson. In this postmodern arrangement, placed at the central cusp of a 10-song program, electric guitarist Brandon Ross joins in painting with colors so unnamable that every rainbow struggles to catch up. Here, too, one encounters, in naked force, Alicia's ability to make even the most established spaces ripple with the ecstasy of ambiguity as the titular current carves its vein through multiple histories. Here is a birth of gratitude that yearns for the death of oppression, for the assurance that the key to your shackles is scintillating right there in what the Good Lord has laid before you. And so, here we have the one who sings.

Yet it is the singer who introduces the album in the form of "Believe Me," one of a handful of originals. Accompanying herself on piano, our heavy blue muse bumps the alignment of chord voicings and thematic lines just slightly off kilter, so that the listener might understand fearlessness as the life blood of maturity. There is nothing safe about her craft, nor should there be, for here is an Artist—the capital A is for Alicia—who plunges her hands into the chaff of leftbehinds and forgottens, wherein ancestral gestures revive themselves through muscle memory. She holds each word up as if to the lamp wicks used to light their way underground. This song's title, then, is not a request, but the declaration of a mother whose sacred pain has given her eyes to see the futility of all wrongs. It is a song that only Alicia Hall Moran could have written.

Even "I Like The Sunrise" becomes almost entirely original when exhaling her brushes across Duke Ellington's pre-stretched canvas. Husband Jason Moran on Rhodes, Ross on guitar, and bassist Tony Scherr show maturity of their own by never stepping on her proverbial toes, allowing every barefooted contact to strike its path with honesty. Further songs, such as "The Little Horses," accompanied here by guitarist and arranger Mary Halvorson, warp the textures of a traditional lullaby into something that thinks forward through the night. Likewise, the acoustic guitar of Thomas Flippin grounds a transformed "Flow My Tears," in which we feel the evergreen pulse of its composer, John Dowland, but awaken to the lucidity of operatic diction and lyrics flown in from Smokey Robinson's "Cruisin.'" This shift finds new parallels in the unceasing love song to haunting effect. Haunting, too, is the droning soundscape of "Shh," in which Alicia breathes and shushes her way into universal slumber. It is one of a few overtly electronic pieces on the album, which like Jason's instrumental "Heavy Blue Mix" blend skylines into oblivion. These also encompass Alicia's own "Open Door," which over a sampled matrix barely whispers its meanings between every run-out groove skip. "Come Back Into My Life" is the remaining original and takes us from hip-hop to trip-hop. With Jason at the keys and Marika Hughes on cello, it distorts and echoes lyrics into dislocation. It is an elegy of elemental longing, the ghost of which ends the cycle in an instrumental re-visitation.

Despite the experimental overlay, this is not an album that challenges by its versatility—for anyone who knows Alicia will have already become aware of her chameleonic wonders—but by its uncompromising politics. She is not merely putting her own spin on the American Songbook, but forging her own out of labor and love. Indeed, she is a culture in and of herself, rising like a sunrise too bright to drink in, except in smallest sips.

Five stars given, but the light is all in one.