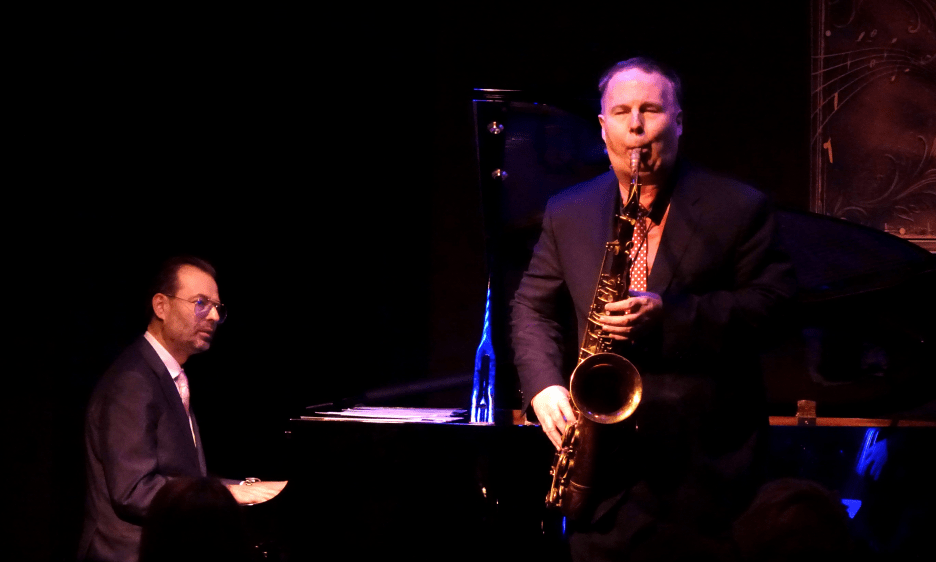 At a certain point in a musician's career the shorthand of describing them as influenced by, or sounding like, this or that great player from the past becomes redundant—Harry Allen sounds like Harry Allen.

His technique is as close to perfect as a swing tenor saxophone can get. Clear and clean, minimal and traditional, Allen plays mellow in the higher register, never forcing or splitting notes. He has an intensity of talent recognized and respected by a list of jazz men from a place up above the top shelf. He stands still, concentrating, and plays with his eyes closed. His quartet opened with Frank Loesser's music from "Guys and Dolls" and moved on to "Them There Eyes," a 1930 tune which Billie Holiday elevated to the status of a standard. They played it fast with exact timing but Allen remained static. Frank Duvall was on bass, while Ron Wiltrout raced around the drums. In his solo, pianist Rossano Sportiello slid into a stride section, working his left hand hard. Northern Italy produces great concert pianists and jazz pianists. Rossano Sportiello is both. Trained in Milan, he toured Europe with The Milano Jazz Gang before settling in New York City. His stride technique is simply superb.

A short commercial for Allen's Rhode Island is Famous for You(GAC Records, 2019) recording was followed by the quartet playing "Where do you Start?" It's a Johnny Mandel song which is the final track on the album. Allen was born in Washington, DC , but grew up in Rhode Island. The ballad introduction came in as breathy low notes from the tenor saxophone, reaching up to meet the rhythm pick up, drums brushing it along smoothly. On his final solo Allen picked up the pace and raced to a finish on a sustained high note while the musicians laid out a long flourish around him.

Count Basie and Jimmy "Mr.5x5" Rushing, nicknamed for his portly measurements, wrote "Sent for you Yesterday" and here you are today. It was a blues which Basie's band played in 1939 while Rushing sang the first lines repeated "Don't the Moon look lonesome shining through the tree." The quartet took it at the original tempo, the bass line walking and brushes shuffling the drums. Allen opened and passed the melody to Sportiello whose concert training showed in the delicate light touch he gave to higher notes leaving him headroom to build a powerful crescendo with chords. At the halfway mark the saxophone took back the lead and they were swinging hard supporting Allen's fast runs. Allen brought it down and they repeated a quiet phrase twice to end on sweet and subtle notes.

Allen detached the neck from his Selmer saxophone and used a long brush before leaving the stage to Sportiello for a solo. Drums and bass stood mute while, true to the original score, Sportiello gave a Chopin nocturne in C minor, lulling the audience with its gentle beauty. He shifted his position on the bench and seamlessly burst into a heavy left hand stride rhythm with variations on the nocturne, which brought grand applause. Allen returned to the stage, looked long and hard at Sportiello, and told him "You're fired."

The deceptive ease of Cole Porter's "Everything I Love" flowed with an almost Latin rhythm leading on to the next song "The Touch of your Lips" whose incomplete lyrics were written by Johnny Mercer before he passed away. His widow sent the lyrics to Barry Manilow who added the music and this unlikely pairing produced a soft ballad of great charm. The quartet interpreted it quietly, treating it gently which brought the 100-seat room to silence. Things can't stay quiet for too long, soon they were roaring along on a fast version of "Sweet Georgia Brown" the saxophone dipping and diving, the piano switching up into double time stride and a long drum solo crashing them into a slam stop to end the first set.

At the break Rossano Sportiello revealed the history of a 70 year-old English collector's Gold sovereign coin which he wears on a chain around his neck. It was a confirmation gift from his grandparents and all his four siblings each have one the same. In conversation he recalled recording Live at the Jazz Corner, Hilton Head with Nicki Parrott and Eddie Metz Jr., (Arbors Records,2011). Harry Allen changed a reed, always taking care of his instrument, which is made up of around six hundred parts and pieces.

The second set started with "The World is Waiting for Sunrise" written under a pseudonym by concert pianist Ernest Seitz in 1919. Saxophone opened then Duvall picked out the melody on bass while Sportiello played a bass line with his left hand on piano. Next, they moved on to "The Touch of your Lips" a 1936 Ray Noble ballad filled with romance. Singer Hilary Gardner wrote the lyrics and Harry Allen the music to accompany the title track for "Rhode Island is Famous for You" which they played with practiced style.

Harry Allen was rock-solid, his music was bursting with swing, his timing was flawless and he remained ultimately focused. Beside him Rossano Sportiello had the precision of a concert pianist, mixed with the fun and flair of a jazz man.