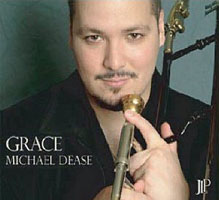 This could be the break-out album for trombonist Michael Dease, his music and style putting him in the company of trombone legends including Jack Teagarden, J.J. Johnson,. Kai Winding and Curtis Fuller.

On Grace, Dease is anchored by a very able rhythm crew, including pianist Cyrus Chestnut, bassist Rufus Reid, and drummer Gene Jackson. On all but one track, Dease is joined by a variety of stellar musicians, including trumpeters Roy Hargrove and Claudio Roditi, saxophonist Eric Alexander, and guitarist Mark Whitfield. Selected songs include mostly lesser-known pieces by jazz greats, as well as one original. Dease handles all the arrangements.

Worth noting is the way the Dease's trombone blends with Hargrove and Roditi's flugelhorns ; the synthesis of sound is peerless, at times evoking the Jay and Kai Quintet trombone duo from the fifties. The best example in Ivan Lins' mellow bossa, "Setembro." Dease begins and, after a few bars, Roditi falls in behind, creating a beautiful choral effect. Likewise, Dease's "Grace" provides another occasion to appreciate this blend, as well as giving both horn players showcase solos.

The quartet shines on John Coltrane's "26-2." Dease starts with a rapid-fire, triple-tongue riff, prodded by Chestnut's piano, who also solos commendably. On McCoy Tyner's "Blues on the Corner," Dease gets into a blues groove, aided and abetted by Alexander's funky tenor.

Miles Davis' "Four" stands out. Usually played at breakneck speed, Dease ingeniously tamps it down, turning a barn-burner into a smoldering ember. It's light, airy quality evokes Swing Era trombone master Tommy Dorsey, of "I'm Getting Sentimental Over You" fame.

His third release as a leader, following Clarity (2008 Bluesback Records) and Dease Bones (2007 Dclef Records), greater success is predicted after listening to Grace.

Discussao; Blues On The Corner; In A Mist; I Talk To The Trees; Four; Tippin'; Setembro; 26-2; Toys; Love Dance; Grace; Salt Song.