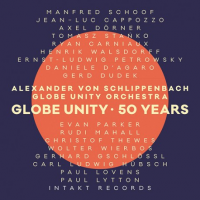 The internet. Mobile phones. Social media. The Fall of the Berlin Wall. A lot's happened over the last 50 years. When pianist Alexander von Schlippenbach first assembled the Globe Unity Orchestra in the autumn of 1966, John Coltrane, Miles Davis and Thelonious Monk still walked the earth. The GUO was one of the first expressions of a truly European style not beholden to such American forebears, part of what eminent jazz scholar Ekkehard Jost termed the Emanzipation. In an incredible feat of longevity, and in the face of limited mainstream support, the ground-breaking orchestra has remained a going concern, notwithstanding fitful reunions in recent decades. In fact the unit's last recorded outing was a similar celebration a decade prior: Globe Unity -40 Years (Intakt, 2006).

Unsurprisingly, few of the original lineup other than Schlippenbach take part in this 2016 gathering. Reedman Gerd Dudek and trumpeter Manfred Schoof are the only other participants who appeared at the 1966 Berlin Jazz Festival, although saxophonist Evan Parker joined not long after. As a group, GUO virtually single-handedly pioneered the concept of a freely improvising big band, something which has become less unusual with the passing of years (witness the achievements of the Peter Brötzmann Chicago Tentet), but is by no means common. In part that's because of the skill, mindset and trust needed for a large group of musicians to cooperate meaningfully without any sort of roadmap.

In some ways, the modus operandi hasn't changed that much. The convention of solo features still holds sway. Ranks open and someone grasps the opportunity and is allowed space to say their piece before being gradually subsumed back into the ensemble. That's what happens here with the blurting, muttering trombone early on and, later, with Rudi Mahall's shrieking bass clarinet. Those who put themselves forward but don't seek to dominate tend to be the ones invited back, so it becomes a self-policing anarchy. As a result, Schlippenbach has ended up with a cast of accomplished improvisers in their own right, including younger voices like American trumpeter Ryan Carniaux , who wasn't even born when the band began.

With this size of group, the danger is that all the tutti sounds the same, a magnificent but undifferentiated maelstrom. So much of the interest and fun resides in the journey rather than the destination. This single extemporized piece unfolds in a series of brief vignettes which emerge from the group discussions. Even Parker's serpentine solo spot is much shorter than in a small group environment. Some of the older hands, like the drummers, help guide the flow, as does Schlippenbach, who prompts and even orchestrates from his keyboard. In the end, it's not about the individuals as much as the pleasure derived from hearing how they literally create something from nothing on such a grand scale.