BY C. MICHAEL BAILEY
October 21, 2018
Sign in to view read count
The Monastic Choir of St. Peter's Abbey, Solesmes, France was re-founded in 1833, following a period of latency. In the late 19th century, the monastery was challenged by the Holy Father, Pope Pius X to fully research the role of plainchant in the liturgy and to edit books on chant that reflected this research. If there is one thing a bunch of Benedictines can do, it is research. The result has been nearly 200 years of intense scholarship that led to the present resurgence in interest in this ancient art.

Pope Pius X challenge provided the monastery with a mission that could be pushed forward in time with the continual practice of Gregorian Chant by newer and newer generations, keeping this ancient worship method vibrant and growing well into the present 21st Century. Paraclete Press is re-releasing the catalog of The Monastic Choir of St. Peter's Abbey to great critical claim. I have reviewed several of the older recording made in the 1980s and '90s previously. The present recordings were originally recording in the early 2000s, concentrating on chant developed well after the heyday of the genre's invention between the 6th and 9th Centuries. 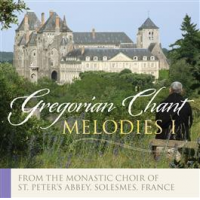 Any Roman Catholic attending Mass in the last 100 years (approaching and since Second Vatican Council) will be more than familiar with the structure and melody of these "chants." These melodies, most often sung during the responsorial psalm section of the ritual, are ingrained like the collective subconscious. Unlike the earlier re-releases from The Monastic Choir of St. Peter's Abbey, these chants were derived from music written between the 10th and 17th Century. That brings things into grabbing distance.

The pieces in this collection, a Mass setting, Benediction of the Blessed Sacrament, Chants honoring the Blessed Virgin, selections from the Liturgical Year from Advent to Pentecost, and from the Divine Office Compline, all derive from the Liber Cantualis (Gregorian Melodies) developed and codified by these Monks of Solesmes. The Mass resonates strongly with this listener who helped sing these chants in the early 1970s. Listening to this music re-informs that muscle memory responsible for ringing the bells at Consecration and holding the thurible before the priest gives the three swings. The sonics of these performances are warm and expansive, closer to the listener than those recordings made a decade before. It is calm and inviting music for the novice and initiated: Like a fleece coat from the cold, and aural maternal embrace. 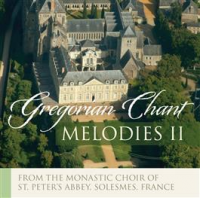 Like Volume I of this collection, Melodies II derives from the Liber Cantualis and were composed the 10th and 17th centuries. Presented here is the Mass of the Angels, from the 10th century. Also offered are chant selections from Advent, Christmas, The Passion, Easter, and Pentecost (differing from the same on Volume I. The Te Deum and a lovely setting of Ave Maria are also in evidence. This flavor of chant musically extends beyond the plainchant of several centuries before, incorporating more elaborate melodies and variations, while still monophonic, starting to predict the polyphony of the Renaissance proper. Perhaps the best descriptive phrase representing this music is "quiet ecstasy," that delay of gratification to the point that the anticipation is gratification alone. This is music that requires and rewards quiet patience, things in short supply

But neither gratification nor anticipation characterizes the most beautiful settings in the collection, those from The Passion: the hymn Gloria laus and the sequence Stabat Mater ("The Suffering Mother"), the latter ending with:

When my body dies, let my soul receive the glory of paradise.

If not this, what?