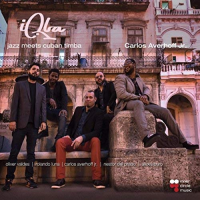 On iQba, tenor saxophonist Carlos Averhoff Jr. employs a skilled quintet to provide dance-worthy renditions of a series of jazz classics plus an original ballad, all shaped by timba, one of the homegrown musical forms of his native Cuba. It's an effective take on Latin jazz, and provides enough strong musicianship to ensure that Averhoff's challenging arrangements are given their due.

It is evident from the opening bars of the lead track, Wayne Shorter's "Yes or No," that Averhoff is willing to take some chances with this material, as a Steve Coleman-esque polyrhythmic vamp unfolds before the band settles into Shorter's melody—albeit with a distinctly Latin feel, in a departure from the more bop-oriented version on Shorter's JuJu (Blue Note, 1965). Similar change-ups are found on standards like "I Fall in Love Too Easily," as the band plays the tune straight before transitioning into a spicy up-tempo segment where the Cuban flavor is front-and-center; or the closing "What's New," in which Averhoff and trumpeter Alexis Baro alternate in delineating the melody and the saxophonist takes a lovely solo turn, before bassist Nestor Del Prado throws down a thick groove that allows the band to take the track out in a much more danceable direction, with a fitting "Salt Peanuts" quote at the end to honor Dizzy Gillespie, one of the original champions of Averhoff's Cuban jazz aesthetic.

There's plenty of room throughout for Averhoff and his partners to showcase their chops. Averhoff's got an ingratiating tone with lots of dynamic energy and fine upper-register command, heard to terrific effect during his nimble solo on "It Could Happen to You." Pianist Rolando Luna's technique is amenable to the rhythmic twists that are integral to Averhoff's arrangements, so that, whether offering a tasteful solo during Averhoff's affecting ballad "Raquel" or steering Cedar Walton's feisty "Bolivia," he's able to provide whatever is needed. And trumpeter Baro makes an ideal second-horn complement to Averhoff, not to mention getting some excellent solo statements of his own, not the least of which is his sinuous, rhythmically-fluid offering on "Bolivia."

Admittedly, not all of Averhoff's arranging choices work perfectly. Sometimes the timba-inflected segments are uneasily juxtaposed with the straight-ahead moments on these tracks; this is especially noticeable on "It Could Happen to You," where a certain busyness takes over and the piece becomes a little too complex for its own good. And a tune like Joe Henderson's "Inner Urge" loses something vital when it's given the slower tempo at which it's played here, even with the appealing Latin rhythmic scaffolding Averhoff provides for it. But if we're keeping score, Averhoff has more hits than misses on this record, and iQba is a compelling entry among this year's Latin jazz releases.

Yes or No; Raquel; I Fall in Love Too Easily; It Could Happen to You; Paz En Mi Canción; Bolivia; Inner Urge; What’s New.