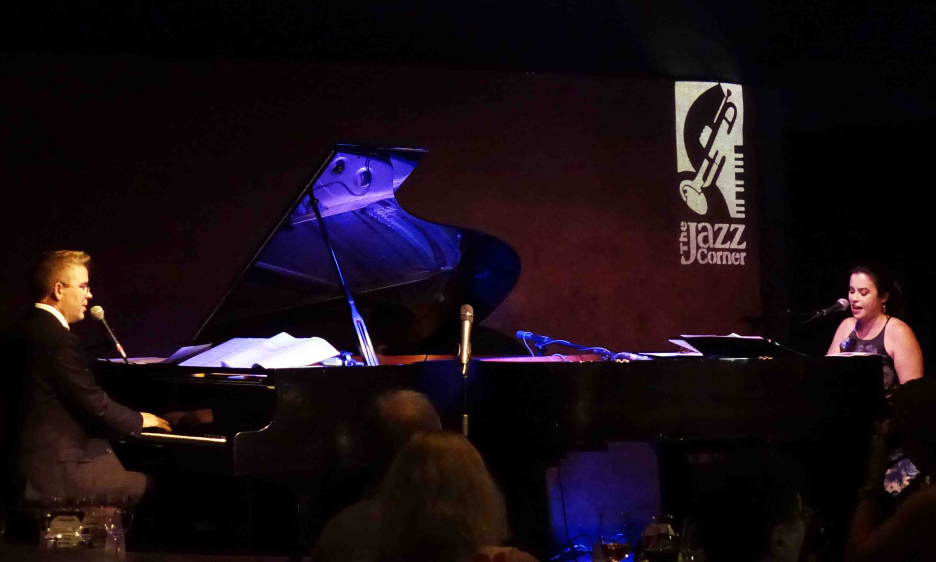 It's very clear, the new Jack Lewin production "Here to Stay" is a tour de force of George Gershwin's greatest music, played on two grand pianos. Champian Fulton, a charming, accomplished young pianist, sang her way through the extensive set list together with pianist, singer and Grammy award winning composer John Proulx. Following the Jazz Corner Sunday Series lunchtime preview, this new show will premier at the Birdland Theater, New York City, October 23, 2018, in a special benefit for The Gershwin Initiative at The University of Michigan. The music was punctuated with Gershwin's life story interludes written by Will Friedwald, music critic for the Wall Street Journal.

Gershwin himself was a concert level pianist, the affinity his compositions have with the piano sounded out clearly. They played a medley from "Porgy and Bess," Gershwin's masterwork opera set in Charleston SC, just two hours away from Hilton Head Island. "Summertime," "I got plenty o' Nuttin,'" It Ain't Necessarily So," the melodies rolled out generously and smoothly from the two pianos.

Gershwin's master concert piece "Rhapsody in Blue" was written as an eighteen-minute orchestral work. Later, it was rewritten by Duke Ellington for his big band. John Proulx composed yet another version for this show, "Rhapsody in Blue, for two pianos." There may not have been a full orchestra, nor yet a big band on stage but the volume of notes and weight of sound was astonishing and earned them a standing ovation. In addition to their piano playing, the two sang back and forth, trading phrases in "The Man I Love," "Nice work if you can get it" and the eternally beautiful "Someone to Watch over Me."

As George Gershwin approached his musical zenith, his brother Ira was writing with him and so were many other composers and lyricists. These collaborations with the Gershwin brothers were celebrated in a medley of short sections of instantly recognizable tunes. The Gershwin brothers also began working with Fred Astaire, the consummate dancer of the age, in "Lady, Be Good" on Broadway, to be followed by many more shows. Tragically, George Gershwin died young at thirty-eight years of age, robbing America of one of its outstanding musical talents.

What a wonderful celebration of the music of the golden age of Broadway. A celebration of an enduring American classic in the orchestral repertoire, and of a complicated operatic work housing an attempt to span the racial boundaries of the 20th century pre-war period. These were huge achievements in a short life. Some of the melodies are still the most played jazz standards today, nearly a hundred years on.