Home » Jazz Articles » Joe Alterman: Give Me The Simple Life 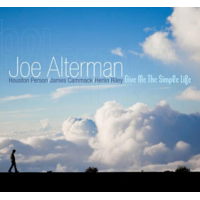 There's a tension for many young jazz musicians, between the desire to start recording and the rather contrary need to develop technically and aesthetically before going public. Sometimes there is no tension: Joe Alterman is a case in point. The pianist may be a mere stripling in his early 20s, but he has the technique, the understanding and, most importantly, the feel of a musician who's been immersed in his chosen music for decades. Give Me The Simple Life, his second album, demonstrates all of this with flair.

Alterman cites stars like Erroll Garner, Oscar Peterson and Red Garland as influences. His own playing has an easy grace and, with his love of the piano's upper register and a neat line in percussive trills, he also exudes a positivity and optimism even on ballads such as Cy Coleman's "Why Try To Change Me Now."

Alterman also demonstrates excellent taste in band mates and a youthful confidence in their hiring. Not only does he acknowledge the influence of Ahmad Jamal, he also invited the pianist's rhythm section to join him on Give Me The Simple Life and, to their credit, drummer Herlin Riley and bassist James Cammack accepted his invitation. Tenor saxophonist Houston Person met Alterman at an New York University masterclass in 2010: the pair stayed in touch and when his invitation arrived Person also accepted, guesting on four tunes. This expert trio could make a puppy with a glockenspiel sound good—with a talented pianist like Alterman their command of dynamics ensures that the music soars.

On Peterson's "Kelly's Blues," Riley and Cammack lay down an irresistible swinging rhythm over which Alterman layers a hard-driving melody. On "Biscuits," his own composition, Alterman sounds like a man with four hands. Over a bouncy, feelgood, rhythm, he plays this jumping, New Orleans-flavored, tune with energetic glee. The slower, more reflective tunes are also beautifully interpreted—Alterman plays subtly, resisting the temptation to overplay. Leslie Bricusse and Anthony Newley's "Pure Imagination" is delightfully bright and upbeat; "I'm Yours" and "I Guess I'll Have To Dream The Rest" are full of late night romance.

There's a 54-year age difference between Alterman and Person, but the veteran tenor player still exudes a youthful charm and enthusiasm with every note he plays. His tone is honeyed and mellow, his timing is absolutely perfect and his feel for a song's emotion is second to none. He matches the trio's powerful swing on "Kelly's Blues" and "Georgia On My Mind" and plays with irresistible warmth and emotion on "I Guess I'll Have To Dream The Rest" and Alterman's "The First Night Home" (a tune that perfectly captures a classic '50s sound).

Alterman's 2009 debut, Piano Tracks Volume 1 (Self Produced) was a well-received first outing, making it clear that he had something special to offer. Give Me The Simple Life moves things up a gear: this lovely and engaging record is something special.

Georgia On My Mind; Give Me The Simple Life; The First Night Home; Pure Imagination; An Affair To Remember; I Guess I'll Have To Dream The Rest; Kelly's Blues; Why Try To Change Me Now?; Why Do I Love You?; Biscuits; They Say It's Spring; I'm Yours.