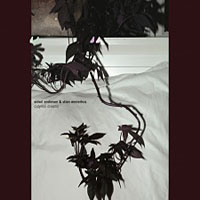 There was a time when a live performance was a one-time event; something experienced once by an audience, never to be experienced exactly that way ever again. Live recordings were costly affairs, and if the particular performance lined up for recording didn't turn out to be a great one—or if there were other factors involved, like a bad piano—well, the artist was, as they say, SoL. Nowadays, it's so easy/inexpensive to record live shows that many artists, like pianist Keith Jarrett, eschew the studio completely. Of course, this facility renders its own set of problems, not least among them an ability to discern between good shows and the less-often truly great one worthy of permanent documentation. So, it's still a serendipitous event when there's an exceptional performance, properly recorded, in a venue where all the other minutiae which add up to being just what the artist needs to deliver that exceptional show actually line up.

Folks in attendance at vocalist Sidsel Endresen and guitarist Stian Westerhus' 2011 performance, at Bergen, Norway's Natt Jazz Festival—even those who'd caught this intrepid improvising duo more than once since its official debut at Molde Jazz 2010—knew that this performance was one of those special ones, and the good news is that it wasrecorded. A little more than a year after the fact, Didymoi Dreams is now available for those who've been wondering what all the hubbub is about. While Endresen and Westerus do perform in venues around Europe, their primary turf is their native Norway, and North Americans who've been enviously reading about their performances at Natt Jazz, Molde, Punkt and elsewhere can finally hear this groundbreaking duo that relentlessly breaks every rule, while being absolutely aware of what it is they're breaking.

It's great to see Endresen with two exceptional back-to-back recordings, after something of a drought since 2008's Live Remixes, Vol. 1 (Jazzland). Ha! (Rune Grammofon), released late in 2011, documents a 2010 live performance with Humcrush and is undeniably fine; but Didymoi Dreams even more successfully captures a vocalist capable of tremendous lyricism, with a warm, rich and unfailingly perfect voice, but one who has, in the past decade, developed a distinctive language all her own, a combination of seemingly impossible-to-articulate phonetics, unparalleled extended vocal techniques and unheard-of conceptual cells, all honed to the point where they are as easy to draw upon as breathing. Endresen no longer sings songs; instead, her voice has truly become an instrument as capable of texture and atmosphere as it is melody and, on occasion, lyric.

Despite an intrinsic paradox in their approaches to sound—Endresen absolutely acoustic, Westerhus unrepentantly electric—they're a perfect match for each other. Since returning to Norway after five years living in London, Westerhus has earned a well-deserved reputation as the country's hardest working guitarist. Amidst a rapidly increasing body of work that includes performing on and producing trumpeter Nils Petter Molvaer's superb Baboon Moon (Sula, 2011)—Westerhus has released a masterpiece of 21st century guitar in Pitch Black Star Spangled (Rune Grammofon, 2010), joining a rarefied group of guitarists who, along with fellow Norwegian (and Molvær alum) Eivind Aarset, seamlessly employ technology to create infinite potential for the landscape of contemporary guitar, as capable of flat-out aggression and ear-splitting sonics as he is painstaking depth and unrelenting beauty.

Endresen and Westerhus clearly share a work ethic, dedicated to finding new ways to use their respective instruments in new aural landscapes, yet paradoxically one is all about the untarnished purity of an acoustic instrument (Endresen's voice), while the other is devoted to the use of a massive arsenal of electronic effects and amplification (in his choice setup, employing four amplifiers and enough effects to fill space that would accommodate a big band). Together, they create sounds that, were it not possible to actually see them live, would be simply unbelievable to most. Westerhus bows, picks, scrapes and slaps his strings, uses the kind of volume that allows him control over feedback and, at times, will spend as much time with his guitar cable unplugged—using just his thumb to create harsh buzzes that he then processes, loops and expands—as he does actually playing his guitar.

Endresen, at times, sounds like she is speaking in tongues—or, at least, in a language foreign to everyone but herself, occasionally injecting English or Norwegian but more often than not using phonetics that she twists and turns, front to back and back to front, with guttural sounds that can be used to create pulse and groove. Oddly, it all still somehow sounds like a language, with cadence and inflection sometimes deceiving the ear into actually thinking it understands what's being said. But, for a singer who, in her earlier days, released albums filled with profound melodism like Undertow (Jazzland, 2000), and Exile (ECM, 1994), Endresen has finally achieved some signposts along a journey that, in the past few years, has finally begun reaching at least some of its intended destinations.

Together, Didymoi Dreams moves from avant-edged ethereal spaces and softer landscapes to rough, hard surfaces; from electronic warbles and feedback screeches—often remarkably used, however, to create staggered pulses—to unexpected moments of tension-releasing consonance. As experimental as this is, and as extreme as it can sometimes become, Endresen and Westerhus still prove that beauty can be found in what might appear to be the least-likely of places, with both "Hedgehumming" and "Hector" evoking a painful lyricism with an uncanny sense of structure.

And that's what makes Didymoi Dreams such a stellar record. Free improvisation is often mistaken for aimless musings, self-indulgence and music that is outré just for the sake of it. Endresen and Westerhus are outré, no doubt about that; but with Didymoi Dreams, they've proven that it is possible to draw form from the ether, and play with absolute freedom while still focusing on building in-the-moment structural constructs. A vital document for those at the show; an essential one for those who'd like to hear free improvisation at its absolute finest.