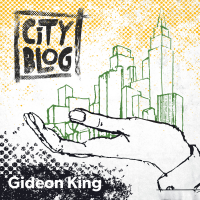 New York based guitarist/composer Gideon King's unique musical upbringing has allowed him to blend emotional, compelling songwriting that incorporates sophisticated harmonies and the always engaging element of improvisation. King says of himself, " My brother, a well-known jazz pianist... cleverly referenced McCoy Tyner, John Coltrane, Bill Evans, and many others. My sisters, on the other hand, were... celebrating the lyrics and melodies of Neil Young, Bob Dylan, Joni Mitchell and... My parents... insisted that classical music was the only heightened form of musical expression. I was engaged by all of these different sounds..."

If King's newest release with Gideon King & City Blog reminds you of Steely Dan, it should come as no surprise. The band was a huge influence on King and he similarly enlists a who's who of contemporary musical giants to help bring his music to life. King's past recordings have enlisted musicians such as John Scofield and Donny McCaslin (who returns on this project), and City Blog is no different in this regard.

Enlisting heavy hitting musicians like bassists James Genus and Matt Penman, pianist Kevin Hays and saxophonist McCaslin ensures that every song on the album has a solid groove as a foundation while the rest of the rich instrumentation, including several vocalists and King himself on guitar, layer beautiful textures around his powerful melodies.

The title track and opener, "City Blog" is probably the most direct homage to Steely Dan and features a stunning solo by Kevin Hays while Genus' driving electric bass groove keeps everything moving forward. The second track, "See in Double," is beautiful and contemplative and works very well as a contrast to the danceable opener. Donny McCaslin's solo here brings the track to an unexpected peak before it relaxes back into its initial mood. Other highlights include "Glide" which features Matt Penman on upright bass, and the moody yet comforting "Dirty Bastard."

Fans of Steely Dan will undoubtedly get a lot from City Blog, but so will fans of contemporary songwriters such as Norah Jones, and even listeners of introspective composers like Pat Metheny will find similarities between King's harmonically conscious, melody driven songs and Metheny's melodic sensibilities.