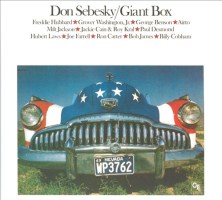 It's a bit bizarre to find an album called Giant Box in a small cardboard case, or as a download lacking physical form, but times change. When Don Sebesky's grand musical statement on CTI hit the marketplace in 1973, it came in a classical-type record box, befitting the stature of the music.

Opinions vary as to whether Sebesky can be said to have been a savior of jazz in the '70s, or a jazz Judas who helped to commercialize the music. Truth be told, he's neither. Sebesky is simply a great arranger and talent who happened to thrive in this music during a period when the ideology of jazz was fractured in so many ways. Sebesky bore the brunt of critical attacks against this new offshoot, but he wasn't trying to reinvent the wheel. While his arrangements were occasionally excessive, many of his works are also masterful musical creations that create an entire universe of sound, in service of a particular artist's vision. While there may be reservations about the "Sebesky Sound," hindsight shows his arranging brilliance, as demonstrated on Giant Box.

The early '70s success of CTI afforded Creed Taylor the opportunity to give Sebesky some musical freedom on this project, and what he came up with is astonishing. Sebesky fuses Igor Stravinsky's "Firebird" and John McLaughlin's "Birds Of Fire" into a single work, featuring cinematic orchestral episodes and exciting solos from the likes of Hubert Laws and Freddie Hubbard. Joni Mitchell's "Song To A Seagull" becomes a feature for Paul Desmond's distant and lonely sounding alto saxophone, but Ron Carter's bass makes friends with him and the pair proves to be simpatico in its conversational work.

The first of three Sebesky originals ("Free As A Bird") is also the first number that deals in hard swinging big band writing, and it also features some wonderful solo work from pianist Bob James, Freddie Hubbard—now on flugelhorn—and Grover Washington Jr. on soprano saxophone. Sebesky's take on Jimmy Webb's "Psalm 150" is the one number that doesn't stand up too well, as it comes off like a combination between solemn chanting, Donald Byrd's A New Perspective (Blue Note, 1963), standard-issue funk, and "Aquarius" from Hair (1967). Things get back on track with Desmond's sad-eyed saxophone work on "Vocalise," which also features vibraphonist Milt Jackson and Sebesky's superb string writing.

The final pair of pieces on the album are representative of Sebesky's experimental side ("Fly/Circle") and understanding of popular, groove-based music ("Semi-Tough"). "Fly/Circle" is an episodic number that features Laws' effects-laden flute runs, Sebesky's pleasant vocals, an eerie Bernard Hermann-esque woodwind statement, solos over a small group setting, and more. "Semi-Tough" goes in a completely different direction, as Sebesky taps into raunchy, straight-up street funk that's part-Isaac Hayes and part Sanford And Son.

While Giant Box is indicative of the bigger-is-better approach of the times, it also serves as a benchmark for creativity in arranging and composition, and helps to place Sebesky's talents in the proper light.

Firebird/Birds Of Fire; Song To A Seagull; Free As A Bird; Psalm 150; Vocalise; Fly/Circles; Semi-Tough.