By KARL ACKERMANN
October 11, 2016
Sign in to view read count 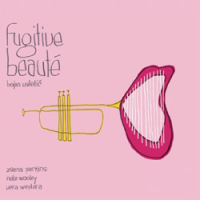 On Fugitive Beauté, Serbian composer Bojan Vuletić wrote thirteen pieces inspired by the French poet/writer Charles Baudelaire who, among other accomplishments, is credited with coining the term "modernity" to describe the brief, transient nature of Parisian life during the period of industrialization in the nineteenth century. Baudelaire's poetry has inspired many musical adaptations in the forms of folk, rock and even heavy metal but Vuletić's approach is different beyond the jazz treatments of his compositions.

Along with being a composer of considerable note in Europe, Vuletić is also an author and has worked across genres as well as in theater and dance. He is trained as a violinist and jazz guitarist and holds degrees in astrophysics and music composition. Only in his mid-forties, Vuletić's discography is deep, with more than two-dozen releases. Not well known in the U.S., he is more likely to be recognized as a mixing engineer on a number of recordings with drummer Paul Lytton and trumpeter Nate Wooley including The Nows (Clean Feed Records, 2012), which had Ken Vandermark on reeds, and Creek Above 33 (PSI Records, 2010). His long association with Wooley resulted in Vuletić's outstanding, genre-defying Atemwende (Ignoring Gravity Music, 2013) where the trumpeter was paired with the Mivos Quartet.

Wooley returns on Fugitive Beauté but in a very different setting. Joined by Zeena Parkins on acoustic and electric harps, vocalist Vera Westera and Vuletić himself, on what are described only as "odd instruments," the album presents an atypical formation. Westera has an eclectic musical background that encompasses jazz, pop and an improvised opera, sung in an imaginary language. She had recorded A View Amazing (Ignoring Gravity Music, 2008) with both Wooley and Vuletić, the latter on guitar. Parkins has recorded or performed with Björk, John Zorn, Pauline Oliveros, Anthony Braxton, Butch Morris, Nels Cline and many others. On occasion, she plays accordion and keyboards.

"Triologue," "Duologue" and "Solologue," brief pieces averaging about one minute, are group compositions while the remaining ten tracks are composed by Vuletić. Each of those ten features some form of either vocalizing or spoken word, sometimes in English, French or Serbian. Westera's voice is an instrument in every sense of the word and the lyrics are mercifully non-sentimental, at times bordering on surreal. On "Eclipse Epileptic" Westera sings, ..."why is this butterfly mean to me/cutting my skin with its wing/I try to move away but it surpasses me/flashing its nasty head...." While Wooley's contributions are steeped in those extended techniques for which he is well-known, "Baryshnikovs Bescheid" is the most hauntingly beautiful playing that he's ever recorded; all too brief at less than two minutes. Parkins manages to incorporate many of her cross-genre influences, sometimes with the edge of an electric guitar, other times fluid and calming, giving the kind of human voice to the harp in the way that Wooley manages to do with the trumpet.

Vuletić explains that the central idea for Fugitive Beauté, was taken from Baudelaire's poem "Les fleurs du mal," describing ..."where a moment and eternity are connected through beauty." He created this interpretation in an unusual manner; giving the score to Parkins, Westera and Wooley and allowing them to alter, dismantle and reconstruct the pieces as they saw fit. They did so in real time, through the recording sessions, making this a living, breathing work of art. It is an unusual and completely engaging album that should appeal to a number of different audiences.