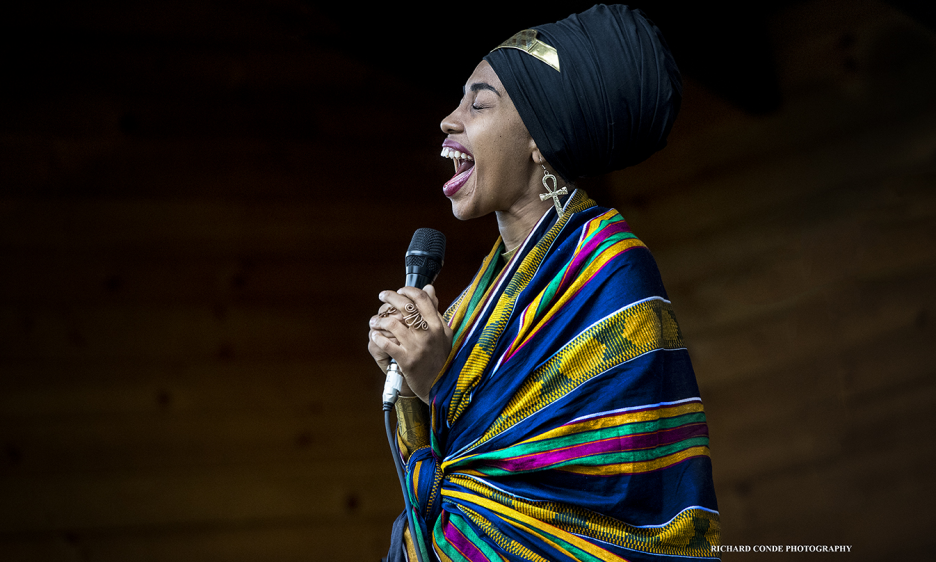 Freihofer's Saratoga Jazz Festival rolled into its the start of its fifth decade with a fresh format and plenty of fresh faces. The festival plays out each year during an amazing two days in the great Saratoga Performing Arts Center venue amid the natural beauty of Saratoga State Park and, though tainted by rain at various points, the regular crowd again proved to be a hearty breed. Rain? What rain?

The festival has two stages—a large amphitheater where larger-name groups perform, and a smaller stage in the back of the SPAC grounds. The aim is to provide an array of styles, introducing younger artists, while still presenting familiar jazz bands steeped in the tradition. The schedule ran the gamut from Herbie Hancock to funky sax monster Lakecia Benjamin, to pianist Joey Alexander who had just turned 15. While many of the young musicians opened people's eyes—and ears—it was Hancock and company who blew the doors off the place.

Hancock showed up, as he often does these days, with African guitarist Lionel Loueke in tow. The pair has played together for long enough now that the musical conversations are deep. And brilliant. And smokin' hot, as Hancock stuck largely to electric sounds, providing a cushion for Loueke's wide-ranging improvisations, from raucous to melodic. Hancock also got the chance to joust and put his unsurpassed chops on display—even stepping out front with the keytar, a keyboard set up to be held like a guitar that can bring forward sounds like a synthesizer. Hancock has always been a master of that, going back to his funky 1980s things. The crowd was completely in step, particularly with his iconic hits like "Watermelon Man" and "Chameleon."

To say Hancock completely stole the show would be wrong. There was plenty of quality music. Among the fine sets was that of Anat Cohen's Tentet, a relatively new group that the talented clarinetist put together that has accordion, piano, guitar, vibraphone, percussion, drums, baritone saxophone, bass, trombone, trumpet, flugelhorn, clarinet, bass clarinet and cello. The band played the music from its 2017 album Happy Song, which covers a variety of styles. Through each adventure, and each mood, Cohen's sweet sound and bluesy soul came through with authenticity and complete command.

She said recently that in this group "if I need a sound, we have enough musicians in the band to create something that I can really wail with the clarinet on top of the band. So it goes from rocking to soft ballads." It certainly did that. Oded Levi-Ari, her collaborator, plays a key role in establishing those sounds. And wail she did.

Vocalist Jazzmeia Horn sang from her debut CD A Social Call with a fine trio anchored by pianist Victor Gould. She is impassioned in her approach and her scatting throughout is very much unscripted and in the moment, her voice serving as a sax, wailing and chancing superbly; filled with emotion. Her music also has a social consciousness to it, typified in her slow, attention-grabbing version of "People Make the World Go Round." There's more to this lady's fine future.

Lakecia Benjamin and SoulSquad played music of their young generation. Seriously funky, hip-hop mixes. When she blew the alto on a few numbers, she hearkened to jazz greats. It was intense and it was easy to see why she has performed not only with Stevie Wonder and Alecia Keys, but Clark Terry among others. Soulful in a different was was Deva Mahal, daughter of bluesman Taj Mahal. Her soul came out of her blues background. There was funk, but also R&B. She owns a big, expressive voice and an understanding of what to do with the lyric. A fine singer with a great feeling. "Run Deep" was a highlight, as were moments when her guitarist was able to cut loose on a solo.

More in the jazz pocket was the trio led by guitarist Mark Whitfield, with Ben Allison on bass and Billy Drummond on drums. Whitfield wailed on a red guitar that may have been white when he started and changed hue with his hot improvisations. All three are fine musicians and they fit well. At one point, Whitfield took the chestnut "Willow Weep For Me" on a journey all over the musical map. The set was hot. Joey Alexander showed his growing talent, also sticking with the jazz tradition including songs by Thelonious Monk. He's developing a flair for exploring a tune without thinking he has to play a thousand notes.

Other vocalists on the bill included Jose James and Gregory Porter. They, too, have their separate sense of soul. With James, he basically comes from that school and injects it into jazz numbers at time. But at the festival it was largely a tribute to Bill Withers and covered that—"Ain't No Sunshine," "Use Me" and more—because that's what his latest recording for Blue Note entails. It was done with class and maintained a good groove throughout. Porter comes more from jazz and injects his soul influences, with a powerful baritone voice that is flexible and expressive. He did songs like "Liquid Spirit" from past recordings, but also did tribute music because of his recent album, which includes the material of Nat "King" Cole.

Representing hard core blues was Scott Sharrard, who had a close association with Gregg Allman and has performed with the Allman Brothers, Levon Helm and more. Sharrad tore it up, playing soaring solos worthy of his pedigree and making raindrops irrelevant.

Latin music was presented in the form a duet, and with Jane Bunnett & Maqueque, a fine all-female sextet. Both represented strong influences from Cuba, where all but Bunnett are from. The duo included Alfredo Rodriguez on piano and Pedrito Martinez on drums. They both have superb chops, and performed both originals, and traditional things from their native land. Some compositions involved call-and-response vocal chants that added drama and soul. Bunnett's group combined the infectious rhythms with beautiful vocals that provided a tapestry within which the leader weaved sweet, serpentine wounds with her soprano saxophone.

Closing the festival on Saturday was Chris Botti, who played a typical blend of pop, flavored with the occasional flurry to please jazz fans. Better was Jonathan Baptiste, who performed with the Dap Kings. He was well known to fans from his nightly television gig on The Late Show with Stephen Colbert. There was a lot of flash to his set as well, but with three backup singers, three horns, and rhythm section, he was able to maintain a high energy, punctuating each song with his strong chops on piano, organ and melodica.

The fresh format portion from producer Danny Melnick included starting the music earlier and separating the two stages more so people could examine musicians at both ends without conflict. Despite rain, it's a format that will see more success as it grows and is tweaked.

The weekend was also bolstered with year when SPAC CEO Elizabeth Sobol started Friday night festivities in the city of Saratoga Springs. In cooperation with local businesses, it involved jazz activities sprinkled about town to help create a buzz for the festival. Bria Skonberg performed at one of the venues, while a group featuring the fine pianists Chuck Lamb and Jorge Gomez Abrante lit up on the stage at historic Caffe Lena.