By Jakob Baekgaard
February 16, 2014
Sign in to view read count 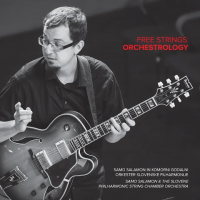 It's not a new thing that jazz musicians like to record with strings. Legendary alto saxophonist Charlie Parker lamented the loss of his string section after he had the thrill of touring and recording with strings and fellow saxophonists Stan Getz and Art Pepper both picked an album with strings, Focus (Verve, 1961) and Winter Moon (Galaxy, 1980), respectively, as a career highlight.

Some might say that part of the attraction of the use of strings is the credibility it brings from classical music, but it could be argued that classical music needs jazz just as much as jazz needs classical music. The sometimes dusty conservatism of classical music is faced with new challenges when meeting the language of improvisation that is jazz. The merging of the two worlds is the chance to create a whole new sound, a Third Stream as the composer Gunther Schuller called it, but often the opportunity has been misspent and the strings have ended up as ornament, a romantic sugarcoating added to conventional ballads and easy listening.

However, there have always been jazz musicians who have tried to expand the use of strings beyond the safe and conventional. For instance, trombonist Nils Wogram has recorded the excellent Riomar (Nwog Records, 2013) and now comes Slovenian guitarist Samo Salamon with his string recording Free Strings: Orchestrology.

What Wogram and Salamon share is a non-hierarchical approach to the strings. They play on equal terms with the other musicians. As Salamon says in a movie about the project: "Usually the strings function as background to the soloists. In Free Strings I tried to use my own compositions, which have extremely complex rhythm and harmonies. The orchestra is not there as a mere backdrop, but it performs all rhythmical patterns and harmonies and is an equal partner in a fascinating sound picture."

The record is indeed fascinating and the orchestra in question is the adapt Slovene Philharmonic String Chamber Orchestra. Together with Salamon, the orchestra embraces a wide variety of moods, ranging from the pastoral beauty of opener "Hebe" to the explosive "Miss Sarcasm," with Salamon's vitriolic outburst on guitar.

While Salamon isn't afraid to show his teeth end employ distortion, it is the gentle side of the music that lingers. The album's greatest revelation is how it emphasizes Salamon's ability to write melodies whose intricate motifs blossom in the string setting. An old composition like "Kei's Secret" gains new layers of emotional complexity while "Rhapsody," a fresh composition written only for strings, shows his ability to think in polyphonic patterns that are united like threads in a finely woven carpet.

Another important player is drummer Roberto Dani whose impeccable taste and sensitivity give propulsion and color to the compositions. Like Salamon, he never plays too loud to overshadow the other instruments, but instead adds a subtle percussive quality to the music that emerges as a truly unique meeting between classical music and jazz.