By Doug Collette
February 16, 2014
Sign in to view read count 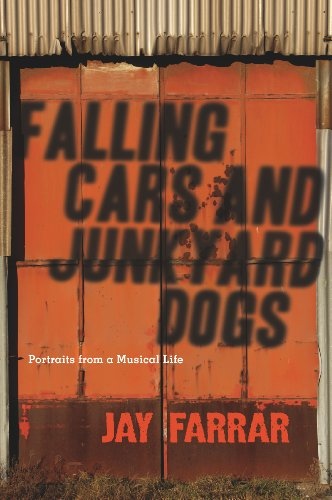 Anyone who's familiar with Jay Farrar's work with Uncle Tupelo, Son Volt, his various collaborations such as New Multitudes and Gob Iron or his solo work knows he has a love of language almost as passionate as his love for music. It should come as no surprise then that he would inevitably write a book or that the publication would reaffirm that impression of Farrar as a writer.

But Falling Cars and Junkyard Dogs extends Farrar's talents as he exhibits an eye for detail and a grasp of the human condition that proceeds directly from his own introspective nature. Neither virtue would matter so much if he were not as much of a craftsman in prose as in songwriting, but it's also a fact that he's honed a healthy detachment from himself as well as the world around him through which he provides himself, and, in turn, his readers, an almost crystal clear vision to depict.

Take his account of an evening with founder member of the Byrds Roger McGuinn. Farrar is clearly star struck, but no less in awe of the man who's mentoring him than the technology McGuinn has surrounded himself with. So when Farrar accepts the rock icon's advisory "not to bother with that country stuff..." it is with grace and deference, but also a steadfast refusal to accept the caution as gospel. Son Volt's Honky Tonk album of 2013 stands as object lesson of wisdom filtered through personal experience.

Portraits of a Musical Life is replete with such instances and many of them are the photos Farrar includes from his various travels and tours around America with his various musical units. He seems to be able to discern value in an image of a deserted warehouse next to train tracks as much as a roadside sign left empty after years of neglect. Jay Farrar is too cognizant of history, based on his own family experience and independent adventures, to overlook the obvious in such objects and how they once played an integral part of people's lives.

To his further credit as an author, Jay Farrar never succumbs to preaching or pontificating, preferring instead to merely offer observations or describe action, letting the reader decide for himself the value of the incident. Thus, his description of the moment of fracture in his friendship with a band member is totally without rancor (or names for that matter) and captures in hindsight the baffled emotional reaction he grappled with at the time it happened, the aftereffects of which he is clearly still processing at the time of that writing and this book's publication in 2013.

Catharsis and the exorcism of demons is certainly at the heart of many of the essays in Falling Cars and Junkyard Dogs, particularly the ones like "lead Car in the Parade," where Jay Farrar describes his father's behavior and attitudes in both heroic and all too human terms. But the author always evinces acceptance of, not just resignation to, his experience(s) and the meaning(s) within, and often as not, like the vignettes related to New Orleans theme weaving in and through close to two-hundred pages, there's a palpable affection for his subjects and an empathy that says as much about him as it does them.