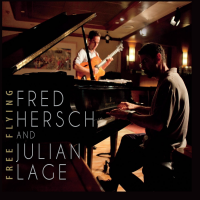 This album is the latest of several recordings in which pianist Fred Hersch solos or joins forces with some highly intelligent, advanced musicians to provide jazz renditions with a sophisticated, chamber music quality. Others are Hersch's Alone at the Vanguard (Palmetto, 2011); Leaves of Grass (Palmetto, 2005)—an ensemble composition based on Walt Whitman's poems—and two additional solo albums: Fred Hersch plays Jobim (Sunnyside, 2009) and In Amsterdam: Live at the Bimhuis (Palmetto, 2006). He also collaborated with trumpeter Ralph Alessi on Only Many (Cam Jazz, 2013). On Free Flying, Hersch collaborates with guitarist Julian Lage, who, at 25, has already achieved a performance level which makes a good match for Hersch and challenges him in some respects.

Lage was hailed as a guitar prodigy when, at age eight, he was playing with Carlos Santana. He was early attracted to jazz, and by the time he was 13, he had performed with Gary Burton and Herbie Hancock. Since then, he has developed into a top-flight guitarist both as a leader and sideman, and has released his own albums, including Sounding Point (Emarcy, 2009) and Gladwell (Emarcy, 2011) The fate of a musical prodigy depends on whether he can transcend the "genius" stereotype and become a working musician, evolving his own musical idiom; Mozart accomplished this and became a composer for the ages.

Closer to home, guitarist Pat Martino—a slow developer compared to Lage—was playing with top groups in his teens, and went on to become an icon because of his innovative and instantly identifiable approach and sound. Lage has reached the point of mature competence and is now striving to evolve into a true guitar master. This album shows that he has the potential to join that venerated pantheon, along with the likes of Martino. Doing so will depend on live and studio encounters that give him an opportunity to fully develop his own influential idiom. Here, he has already demonstrated his superb craftsmanship and ability to step up and work closely with a master like Hersch; his job is to blend and, in doing so he succeeds supremely well. Only the future will determine whether or not he adds a unique stamp to his guitar playing.

The key element of this outstanding album is the seamless interplay of piano and guitar. Historically, and instrumentally speaking, if you combine a piano and guitar, you get a harpsichord, a keyboard that plucks the strings rather than hammering them. This was the primary keyboard instrument of the Renaissance and Baroque eras, soon to be supplanted, in Bach's time, by the pianoforte—the modern piano. Moreover, Bach owned and wrote several compositions for lautenwork, a harpsichord with the softer sound of a lute, a precursor of the guitar.

The historical connection between lute, harpsichord and guitar hovers around this duet collaboration between Hersch and Lage. Moreover, as an important basis of jazz counterpoint, highlighted in the bebop era, it derives from Bach as well. Thus, the musical sensibility of this recording is not unlike Bach's tightly textured yet exploratory "Goldberg Variations," except that Hersch and Lage carve out jazz motifs and modern harmonics. The delight of the music comes from its contrapuntal weaving of themes, and variations so well integrated that, except for the different sonorities, they seem to emanate from one player and instrument. Like Bach and the harpsichord, Hersch and Lage vary dynamics and intensity sparingly. The listening pleasure, of which there is plenty here, comes from the mutual brilliance of execution and the architecture and development of musical ideas. This is co-improvisation taken to the highest level.

The compositions on this album are largely Hersch originals previously recorded in other contexts by the pianist. The two exceptions are "Beatrice" by Sam Rivers and "Monk's Dream," from Thelonious Monk. The setting is the Kitano jazz club in New York—a small, intimate space with a Steinway piano that has been fingered by some of today's best contemporary jazz pianists, among them Don Friedman, Bill Mays, Roberta Piket and Jim Ridl. The result is studio quality sound with a live ambiance and a touch of emerging jazz history.

The initial track is Hersch's "Song without Words #4: Duet," which evokes a madrigal-like quality, as if it could have been performed on period instruments from the Renaissance. The development has a modal feel, as the lilting melody soon lends itself nicely to a rumba-like dance development. (Hersch often mimes the mix of Latin and stride piano heard in the radio days of the 1920s and '30s.) Lage picks up on Hersch's phrasing, so that piano and guitar interact seamlessly. A natural follow-up is "Down Home," which relaxes into syncopated vaudeville with a ragtime twist. The emphasis on rhythmic patterns characterizes the whole set.

The mood changes significantly with "Heartland," a reflective ballad whose melody is introduced by Lage, providing a contrast to the driving quality of most of the tracks. Hersch gives a sampling of romantic lounge piano playing at its best, with an open, lyrical quality that owes something to the ethereal beauty achieved by the great Bill Evans.

The title tune,"Free Flying" first appeared on Fred Hersch Pocket Orchestra Live at the Jazz Standard (Sunnyside, 2009). The percussive, four-bar theme and variations clearly illustrate the Bach influence, as does the repetitive drone-like bass and alternation of unison and counterpoint between the two instruments. Hersch and Lage work so tightly together that sometimes the only way to tell who's playing is by the sound of the instruments.

"Beatrice" a post-bop song by the late great saxophonist Sam Rivers, is one of the most swingable ballads in all of jazz. Here, Hersch and Lage take it at a lively pace, alternating off-beat syncopation with straight-ahead rhythms, releasing themselves from the tight contractions of the other tracks. The rhythm work is more playful, yet a certain tension and holding back of the beat pervade the piece.

As the album proceeds, Hersch gives Lage more room for his own improvisations, and the guitarist is clearly up to the challenge. "Song Without Words #3: Tango" is vaguely reminiscent of "Midnight Sun," with its descending lament motif. It features Lage, and is a perfect foil for him. He develops a blend of tango and blues in single lines resembling some of Pat Martino's best ballad playing, represented for example in the latter's memorable performance of "What Are You Doing the Rest of Your Life."

"Stealthiness" is dedicated to guitarist Jim Hall, possibly with some reference to the ingenuity of his playing, and the duo engages in rough-hewn Monk-ish rhythmic shifts and quizzical phrases. In this track, each player takes solos with the other comping, in contrast to the contrapuntal playing featured elsewhere. Eventually, Hersch leads up to an energetic coda, a quiet release, and a punctuated end. In turn, "Gravity's Pull" continues with the focus on Lage, showing his melodic style. After a quiet beginning, there is a gradual "pull" that develops into some brilliant Bach-inspired counterpoint.

The set ends with "Monk's Dream," with the duo using the Monk tune as a way to play their own version of Monk's punctuations; arrhythmias, and playful use of the upper register. They outdo Monk in eccentricity.

To sum up, Hersch and Lage mesh superbly and have put together a coherent and listenable set of sophisticated improvisations which fuse baroque counterpoint, punctuated rhythms, and diverse jazz motifs in a disciplined yet exciting way. Simply by virtue of the close coordination of piano and guitar and tightness of performance, the album points up the continuity of music from Bach to bop to modernity, and in this respect represents something of a measuring rod for the development of jazz forms.