Home » Jazz Articles » Run Logan Run: For A Brief Moment We Could Smell The Flowers

Run Logan Run: For A Brief Moment We Could Smell The Flowers 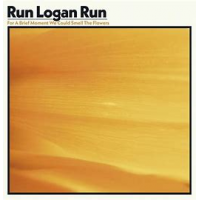 Tenor saxophone and drums albums have been at the heart of London's alternative jazz scene since its first stirrings around 2015. That year, saxophonist Binker Golding and drummer Moses Boyd, then members of singer Zara McFarlane's backing band, started tossing riffs and beats back and forth to each other during pre-gig soundchecks.

In short order, the duo formed the semi-free Binker and Moses, and have since released four albums which are among the crown jewels of the new British jazz: Dem Ones (Gearbox, 2015), Journey To The Mountain Of Forever (Gearbox, 2017), Alive In The East? (Gearbox, 2018) and Escape The Flames (Gearbox, 2020).

Meanwhile, over in Bristol in England's West Country, saxophonist Andrew Neil Hayes and drummer Dan Johnson were getting the John Coltrane / Elvin Jones "One Down, One Up" message, too. In 2017, the pair formed Run Logan Run, debuting with the excellent The Delicate Balance Of Terror (Weizen Baum) in 2018. The album was produced by Danalogue the Conqueror, keyboard player with tenor saxophonist and clarinetist Shabaka Hutchings' Afro-Futurist trio The Comet Is Coming. (Hutchings, incidentally, has performed live with just a turntablist accompanying him, but has yet to record in a tenor-drums setting).

Dan Johnson has since left RLR and his place has been taken by Matthew Brown, formerly of Bristol's Dakhla Brass ensemble. In 2020, weaving in and out of lockdown, the new duo recorded For A Brief Moment We Could Smell The Flowers, co-produced with Nostalgia 77's Riaan Vosloo. Vosloo added some bass guitar and synths after the event but the additions ornament rather than recalibrate what remains, fundamentally, a tenor saxophone and drums outing. The sound on For A Brief Moment We Could Smell The Flowers combines an explicit nod towards industrial rock and a continuing fascination with mid-period Pharoah Sanders. The sound is big, in your face, rough hewn and intense. Those members of the jazz police who have not already been vaporized by Binker and Moses are advised to stand well back. Great stuff.

Screaming With The Light On; A Brief Moment; Give Me Back My Slippers; Moving With Speed; It’s About Ice Cream; Cold Shower; Shout Song; Wise Man Eames.

Title: For A Brief Moment We Could Smell The Flowers | Year Released: 2021 | Record Label: Worm Discs