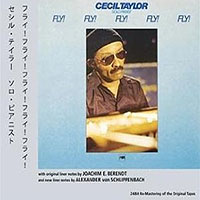 83 years old and approaching ninety releases as a leader, pianist Cecil Taylor's place in the history of jazz may already rest assured, but he's more cited than seen these days. He may not come up as a primary influence as often as usual suspects Bill Evans, Keith Jarrett, McCoy Tyner or Herbie Hancock, but in the free jazz realm there are few as distinctive or influential—and who've avoided the lure of compromise. Paul Bley comes close, but while the Canadian pianist hasn't marched to anyone's drummer but his own, he's been more out there in the world, collaboratively speaking, versus the more absolute and resolute Taylor, who rarely works with anyone beyond the purview of his own groups. And though equally unencumbered by preconception—at least in most circumstances—Bley has always played the austere aesthete to the seemingly more flamboyant and aggressive Taylor.

For those who've dismissed Taylor as an important but unapproachable player, 1980's FLY! FLY! FLY! FLY! FLY!—part of Promising Music's ongoing remaster series of Germany's MPS catalog—might just change some minds. Spontaneity may be the order of the day—culminating Taylor's near-decade long exploration of solo piano—and there's plenty of his signature virtuosic expressionism, but what FLY! also demonstrates in the clearest possible fashion, is Taylor's broad purview, and complete and utter sense of purpose.

Taylor's original (and brief) liner notes tell all: "If a man plays for a certain amount of time...eventually a kind of order asserts itself. There is no music without order—if that music comes from a man's innards...it is a question of recognizing ideas and expressions of order." There's plenty of order to be found, as Taylor pulls motifs from the ether and works them—stopping, starting, twisting, turning and stretching—with unmistakable animus. Free this may be, but it's still the consequence of split-second decision-making that renders these eight improvisations as far more than the meandering randomness to which free jazz naysayers so often ascribe. There are unmistakable roots in the jazz tradition, with encyclopedic trace elements of everything from stride to bop, but the references are so fleeting that it's easy to miss them. There are changes, too—as in "T (Beautiful Young'n)"—though how and when they manifest themselves is never anything but unpredictable.

There are hints of European classicism, too, as German pianist Alexander von Schlippenbach writes in notes written specially for this edition, even as Taylor relentlessly turns on a dime, moving from one thought to the next with unerring logic and unmistakable inevitability. And there are brief glimpses of real beauty, too, despite often being bookended by more oblique ideation.

Taylor's technical acumen is truly the subsummation of a life already past midpoint when he entered MPS Studio in Villingen, Germany in September, 1980. Remastered with the same tender care as the rest of its series, Promising Music's reissue of FLY! FLY! FLY! FLY! FLY! brings an album that has been all-too-often overlooked back into circulation, and is a welcome entry point into the music of an artist for whom "compromise" and "pander" are the two dirtiest words of all.