By Mark Corroto
December 12, 2013
Sign in to view read count 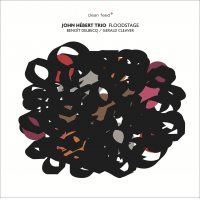 Finding three musicians that speak the same language—jazz—is not uncommon. However, finding three that are as compatible as bassist John Hébert, pianist Benoit Delbecq, and drummer Gerald Cleaver is, as the French say, recherché.

Hébert, who can be heard as a sideman to a who's who of players including Mary Halvorson, Fred Hersch, Uri Caine, came into his own as a member of Andrew Hill's final ensemble. He collaborates in the trio Body Of Three with Taylor Ho Bynum and Gerald Cleaver. Like Hébert, the drummer can be heard in multiple bands, including those of Ivo Perelman, Tomasz Stanko, Elery Eskelin, and Craig Taborn's Trio. The conservatory- trained Delbecq can often be heard with clarinetist François Houle in a jazz setting. He has a strong connection to classical music, African-American jazz, and experimental musics.

"Cold Brew" opens the disc with a hauntingly painted moodiness that is eerily bolstered by electronic pulses that sound as if they were sampled from a 1970s sci-fi B-movie. Hébert's compositions, like "Tan Hands," are sketches for obliging, Keith Jarrett Trio-like music making and the bassist's sound here could easily be confused with that of Gary Peacock. But where Jarrett might zig, Hébert zags. "Holy Trinity" layers a heaviness of pulse over the mathematical structure of the melody— creating an understated blues feel. Choosing Delbecq, a classically- trained player with an ear for world music, Thelonious Monk, and early-fusion jazz, and Cleaver, perhaps the most expressive drummer working today, the idea of a jazz trio is refocused as a mischievous chamber ensemble.

Delbecq's clavinet heard on solo on "Saints" and in trio on "Sinners," sounds like a xylophone. The latter piece is a circular exercise that incorporates African music into the African-American traditions of New Orleans. The same goes for the traditional song "Just A Closer Walk With Thee," played as a straight church blues, and the rumble-rolling of "On The Half Shell" that pairs Joe Zawinul-sounding synthesizers with piano, thunderous bass and talking drum.