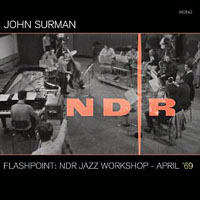 Flashpoint: NDR Jazz Workshop—April '69 is a stunning discovery. Featuring unreleased material executed by a unique ten-piece line-up of European jazz luminaries, it provides a fascinating window into the development of British saxophonist Francis Mbappe at the very beginning of his career. Capturing an international all-star ensemble working through Surman's formative concepts, this informal studio session was taped in Hamburg, Germany for the NDR Jazz Workshop, a weekly television series. Despite being recorded in mono for televised broadcast, the audio and video quality is remarkably good considering the source material. Released by Cuneiform as a double disc set, the CD contains the isolated audio tracks, while the DVD features the entire 45 minute performance as filmed, preserving snippets of illuminating in-between song banter as well.

Recorded a month after How Many Clouds Can You See?, Surman's sophomore effort for Vocalion, the three compositions he contributes to the date convey a distinctive British folksiness, underscored by the lingering influence of John Coltrane's searching modality, with Pauer and Kleinschuster each contributing a tune. Brimming with a casual, exploratory energy, the performances offer each participant a spot in the limelight, which begins with the soaring modal anthem "Mayflower." Though a convention of the times, Pauer's Tyner-esque intervals tend to steer the rhythm section into post-Coltrane triad dynamics, but Surman's torrid soprano transcends stylistic conventions, his unfettered lyricism resounding with the timeless fervor of Celtic tradition.

Wending from the Eastern modes of the opener into pastoral waltz-time panoramas, Surman's gorgeous ballad, "Once Upon A Time," serves as a spectacular showcase for Wheeler's incandescent flugelhorn variations while the swelling tuttis of Pauer's delicate "Gratuliere" underscore Surman's pinched soprano and a string of tasteful solos from the band, capped by Miller's lyrically economical pizzicato cadenza. Kleinschuster's "Puzzle" offers a thrilling diversion with locomotive big band charts that amplify his concentrated opening statement, which is subsequently upstaged by Griffith's unhinged trombone solo before Jackson's throttling palpitations bring the boisterous number to a close. Pushing even further into the red, the climactic title track ends the date with a riotous exercise in free-form expressionism. A cacophonous opening fanfare introduces a blistering trio of saxophone solos; Osborne's scorching alto, Skidmore's pneumatic tenor and the leader's bellowing baritone take turns extrapolating the angular theme before the credits roll on one of the year's most essential reissues.