BY JAMES FLEMING
October 26, 2018
Sign in to view read count 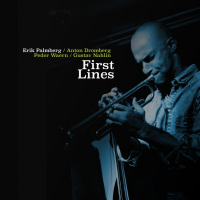 The playing is spare, cooled. At its best it shines like a new blade in the sunlight, with all the pointed passion of a brilliant sentence. At its lowest, Erik Palmberg's First Lines loses that shine and replaces it with sheen: the glittering finish of studio perfection. A coat worn to flesh out the music. But that doesn't fill its empty core.

Particularly on "Erland's Song" and "Another Waltz," the music drifts away into empty glitziness. Metamorphosing from the mercurial cool of the haunting and emotive "Outgoing" into dulled, age-old tricks. "Erland's Song" opens beautifully with what Gil Evans called "distilled melody." "If you lay on it too hard, you don't have it," he says in Nat Hentoff's liner notes to Miles Davis' classic Sketches Of Spain (Columbia, 1960). And in the tune's opening bars, Palmberg has it resting in the bell of his flugelhorn. Floating on the tune he eases through the instrument.

But he lets it fall. Like the finest sand, the beauty of the melody sifts out of his grasp. So the song falls short. Its opening lightness grows clumsy and subdued. And it edges its way back into the middle of the road, a safe distance from the adventures on either side.

"Blues News" stands apart from its brethren tracks on piano/percussion-less terrain. Carried on Peder Waern's double bass's back, Palmberg's playing is filled with a life and vitality that is absent from the other numbers. He fills his tone out to take up the emptiness left by the MIA rhythm section. And a jab of humor is injected into the track with its playful ending, to lift the record out of cool's mire. To light a spark under its ass.

The opening chord of the following "Days Of Light," however, offsets the balance again, tipping the scales towards the pitfalls of "pretty" and "cool." And the ensuing Burt Bacharach-esque niceties in the piano accompaniment and trumpeting serve only to drag the record down further into those traps. Where passion and emotiveness are scorned in favor of icy self-possession and vanity: in favor of "the cool."

Even on Birth of the Cool (Capitol, 1957), Miles Davis did not sacrifice his fire. It may be smooth, frictionless music. But cool jazz, when done well, is a potent and intricate genre, where threads of music interweave to make the most beautiful and fleeting tapestries. As Gerry Mulligan accomplished with Chet Baker. But there is always the danger of the cool jazz musician disappearing into their own reflection, as Baker undoubtedly does on his worst records, where he sounds thoughtlessly vainglorious. On First Lines' best tracks—the opening take on Irving Berlin's "How Deep Is The Ocean?," the great piano riff on "The Suspect"—the balance is struck. And cool sits alongside fire in perfect harmony.

It's on the lower moments that the record tips towards bland and nameless cool, and so comes across as merely repressed. It's as if Palmberg has more to say, but cannot quite figure out how to fit it into the notes. While no additional notes are required, they have not been mined deeply enough to get all the worth out of them. Only their preciousness has been extracted.

How Deep Is The Ocean; Outgoing; Erlands Song; The Suspect; Con Alma; Blues News; Days Of Light; Another Waltz; Turn Out The Stars; Natural Rhythm; Sortie.