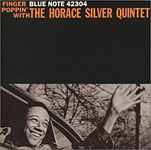 Finger Poppin' (1959) followed Silver's most under-appreciated (and perhaps most ambitious) Blue Note date, Further Explorations (1958). The cast is different (though the fiery Louis Hayes remains on drums), but the compositions and arrangements by Silver are no less artful and the soloists as inspired as the frontline of Art Farmer and Clifford Jordan from the preceding album. This time it's Blue Mitchell and Junior Cook negotiating the fast tempo and tricky stop-and-go melodies with precision and ease, with Mitchell impressively setting the pace with the first solo on the date. He's crisp, lyrical, inventive, melodic—reminiscent of Kenny Dorham with a fuller sound—and Junior Cook takes his cue accordingly, delivering a solo that's almost as melodically arresting as a Hank Mobley gem. Both soloists employ the too-rare practice of "listening to themselves," repeating and modifying their phrases while developing whole structures at top speed as opposed to letting fly with a stream of bebop cliches.

The arrangements have some of the complexity and sophistication of tunes like "Ecarole" and "Moon Rays," stylings reflective of the creative (even Ellingtonian) side of Silver which, unfortunately, became less apparent after simpler fare like Song for My Father (1964) proved a commercial formula that could best serve to keep tiny Blue Note records financially solvent (though it should be noted that the operation folded within several years after such Blue Note blockbusters as the aforementioned and Lee Morgan's Sidewinder (and its numerous imitations).

Thanks to the eventual purchase of the label by mega-conglomerate EMI, "Blue Note" still lives on at least in name, but it's albums like Finger Poppin' that testify not merely to its commercial niche but its invaluable contributions to a vibrant American art form in full bloom.