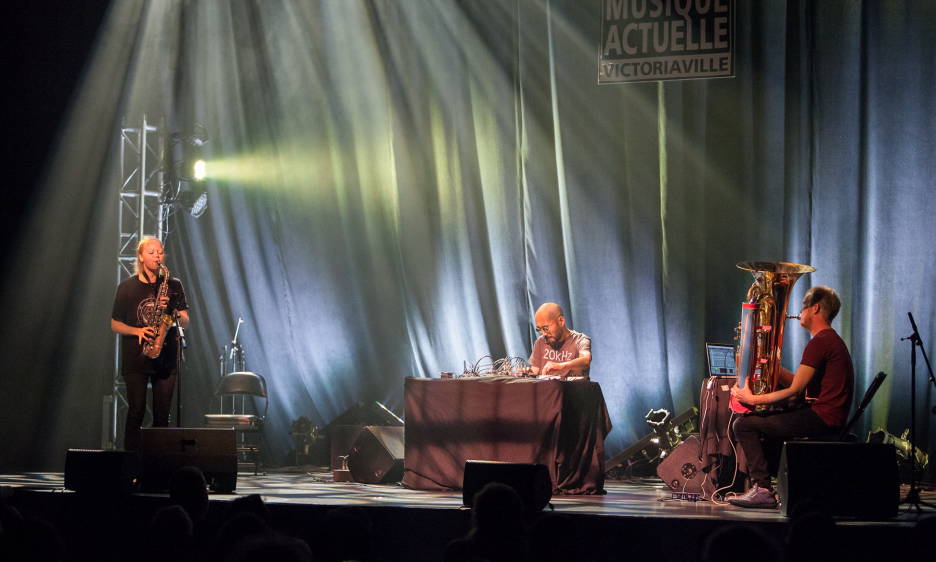 In a span of now only seven concerts over two editions of Victo, the Eglise St Christophe d'Arthabaskahas has become a favourite among the festival venues, for the acoustic environment created by the high arch of the beautifully decorated nave. So it was the site for three of the most captivating concerts in the 34th edition of the festival: solos by Charlotte Hug, Erwan Keravec, and Lori Freedman.

The first North American appearance by Erwin Keravec, kicking off the third day of the 34th FIMAV, was likewise the first solo bagpipe performance in the thirty-four editions of the festival. It was highly anticipated among the hardcore veterans of Victoriaville, given the variety of Keravec's activities in Europe over the past number of years, including collaborations with Mats Gustafsson, documented on their recent album, Luft. While Gustafsson was prominent in the festival this year, he did not play with Keravec, unfortunately.

Like Charlotte Hug, in her mesmerizing performance the previous day, (see Part 1 of my FIMAV review) Keravec could be heard before he could be seen. Emerging in the upper seating area, Keravec paced intensely all around the church, stopping to investigate the acoustic properties of its nooks and crannies, blowing long tones on the pipes, filling the building with a cloud of sound that moved around the church as dictated by Keravec's location, pitch, volume, and location. Upon reaching the chancel, Keravec, an intense-looking man, checked out the sounds in all parts of the area before settling in on the dais, where he proceeded to present a vision of the bag pipes removed from folk tradition, non-generic and capable of many possibilities.

As artistic director Michel Levasseur noted in his introduction, clarinetist Lori Freedman, a resident of Montreal long active on the Canadian improvised music scene, has made more appearances at Victo than any other musician, but her set at St-Christophe d'Arthabaska on Monday afternoon was her first as a soloist. Playing Bb clarinet, bass clarinet, and contrabass clarinet, Freedman went through of mix of her own compositions, and those by others, including a composition created for her from recordings of her improvisations. Freedman's playful and purposeful performance was received warmly by an audience ragged from lack of sleep and much musical stimulation.

An unhappy theme that emerged over the weekend was performers investigating one musical idea, and proceeding to grind that idea into the ground for an hour. Sometimes, as in the case of the Saturday night set by Fire!, there were elements of the music that overcame its predominantly static quality. In their case, the music was based on a one-bar bass riff; Mats Gustafsson's probing saxophone wail rode the funky, somewhat proggy rhythm, redeeming what would have been otherwise tiresome.

Sadly, depressingly, two of Saturday evening's three performances by Japanese artists went on too long to no great effect—disappointing, considering the high hopes for this program. The 10 o'clock double bill had solo artist Phew, on voice, computers, and electronics opening, followed by the trio Saicobab. Phew's eery mix of voice and whispery electronic sounds enchanted for the first half hour, which would have sufficed. Unfortunately, she continued in exactly the same vein well past the point of interest. The energetic Saicobab also carried on much too long, the virtuosity of Yoshida Daikichi on sitar and Hamomoto Tomiyuki on percussion on eventually subsumed by the sameness of their songs. Both of these sets would have been better appreciated had they been no longer than forty minutes.

As a result of the length of those two sets, the audience had to wait until almost 1:00 a.m. for the Japanese punk duo Afrirampo, but the wait was worth it. Reunited two years ago after a six-year hiatus from performing together, Oni and Pika play—and it is play—with extreme high energy, humor, and positive spirit. Winning over the audience immediately with their chant of "je t'aime," which they eventually turned into a call-and-response, they dove into a performance that was full of abrupt shifts in pace and volume, Oni slashing at her guitar, Pika hammering the drums as hard as anyone you'll see, barefoot leaps, face paint, tartan schoolgirl outfits—trying to give you a picture here. Unpacking the semiotics of the performance could fill pages, but the bottom line is that it was just great fun.

Last year, FIMAV ended with magnificent performances by the Nels Cline Quartet and Anthony Braxton's magisterial solo set; the final day of this year's festival did not match those heights, the highlights being the performances of Lori Freedman and the 3 o'clock set by the trio of alto saxophonist Mette Rasmussen, Toshimaru Nakamura on mixing board, and Martin Taxt on tuba. An unusual instrumentation to be sure, but over a dense wall of sound set up by Nakamura, Rasmussen played long, smooth lines burnished by subtle variations in tone, attack, and decay, while Taxt's tuba functioned more or less as a percussive counterpoint to Rasmussen. Solid.

I don't know if the show by the Russian trio Phurpa was the worst show I've seen in nineteen Victoria Day long weekends at Victoriaville, but it was most certainly the weirdest. The performance is based on a type of low, growling throat singing that comes from an old Tibetan Buddhist tradition, with the performers sitting cross-legged on the stage clad in black robes and hoods. They employ small instruments as well as long metal horns, and they burn some kind of herbs in a bowl on the stage. In other words, completely out of the frame of reference of everyone in the audience.

The festival ended with a volume fest courtesy of Mats Gustafsson, Merzbow} and Hungarian drummer Balazs Pandi. There is something impressive about the type of volume that becomes a physical presence in the room, and Merzbow concerts always contain that element. The other part of the listening pleasure lies in the microtonal variations within the barrage of sound. So, that's what we got, but somehow even the energetic rock drumming of Pandi could not give the music much of a sense of forward motion. Maybe they weren't trying to do what I wished they had done, and that's fine. I'm OK with not really getting something until much later or never at all, and whatever happens at Victoriaville in May, there is something that brings us back to a small city in the middle of Quebec to listen to adventurous music, socialize, complain about the food choices in the town, and make plans to see other adventurous music—à la prochaine.