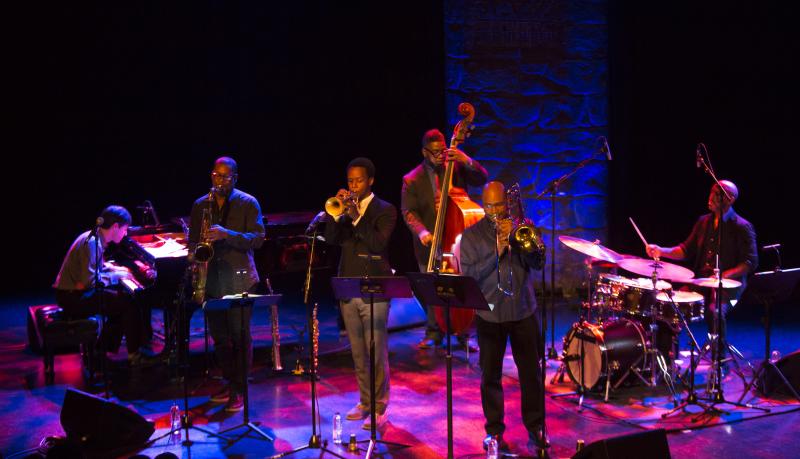 The final two days of the festival. Lots to hear right up to the end, including the second and third of Ravi Coltrane's Invitation concerts.

Saxophonist Ravi Coltrane brought his current quartet to his second concert in the Invitation series at Gesù: guitarist Adam Rogers, bassist Dezron Douglas and drummer E.J. Strickland. The night's music started out much more rhythmically grounded than the duet concert had been, as one would expect with a rhythm section. Coltrane played soprano saxophone over a bass ostinato pattern, an original he later identified (with "Maryland" in the title, I think; didn't catch the whole thing). The winding theme of "Candlewood Path" came next—the only composition that would be played on all three concerts—with an energetic drum solo played over a vamp at the end. Ornette Coleman's "Round Trip" from New York Is Now! (Blue Note, 1968) began with the theme in fragmentary form before coalescing. The rest of the arrangement was freer as well, true to Ornette's usual working method. Rogers completely laid out during Coltrane's soprano sax solo.

The ballad "Cynthia's Song" came next, followed by "Swamini" which was written by the recently departed pianist Geri Allen in honor of Coltrane's mother, Alice Coltrane. Allen had been an early mentor when Coltrane first came to New York. He spoke fondly of playing music with her, describing her as kind, as well as "spicy." The arrangement included a stately unaccompanied bass soliloquy from Douglas. After a rubato ballad and an up- tempo tune with a throbbing rhythm, the band was called back for an encore. Coltrane finally picked up his sopranino saxophone for the fast theme, an exciting ending to a satisfying concert.

This is a quartet with terrific chemistry. Bassist Douglas (who was able to make the gig after all, despite not being listed in the program) and drummer Strickland have played with Coltrane frequently, and Rogers has some history as well. I was especially interested to see Rogers play live for the first time: he did not disappoint. He was an exciting soloist, and a creative, sensitive accompanist.

Inuk vocalist Tanya Tagaq has developed her own solo approach to Inuit throat singing, a traditional art normally performed by two women in an echo game. Imitation of natural sounds is a big part of the game, which explains some of the downright unnatural sounds that Tagaq produces. She began her concert by commenting on the symbolism of the color and decoration of her dress. Taking off her sealskin shoes, she responded to criticism of seal hunting by pointing out its importance to the Inuk economy—and asked rhetorically how many audience members were wearing leather.

This performance was improvised around the themes of her current album Retribution (Six Shooter Records, 2016). She said she couldn't guarantee how much of it they would cover—then the exorcism began. Jesse Zubot's electronics & violin seemed to lead the improvisation, with Jean Martin's drums carrying most of the rhythmic weight, and Bernard Falaise's heavily processed electric guitar providing atmospheric textures. Tagaq began with a vocal chant, then as the tribal rhythm built she went into sighs, shrieks and low moans—a performance that frequently feels more like a possession. Around now the choir came in for the first time, a substantial enhancement to the group sound.

At first intoning a background for Tagaq's lead, they moved on to contributing their own textures, such as breaking into a dense texture with all of the individual choir members singing their own phrases (recalling 20th century choral works by composers like György Ligeti and Krzysztof Penderecki). When the singer launched into the spoken text of "Retribution" it was clear that at least some of the album's structure was present in this performance. In the midst of a mostly instrumental piece the words make the thematic focus clear: "retribution will be swift." It places the focus firmly on environmentalism and indigenous rights, Mother Earth's primacy whether human society recognizes it or not.

Tagaq's vocalising only ceased briefly towards the end, a gentle section for the instrumentalists and and the chorus. Then the music built to another climax, and it seemed clear that she would be perfectly capable of singing the whole concert non-stop. That energy—and the sounds she makes—result in an avant-garde presentation like no other, one with an emotional connection that completely bypasses the brain. You feel it, even if you don't understand it.

Ravi Coltrane and The Void

Ravi Coltrane's final Invitation concert expanded his quartet (this time with pianist Glenn Zaleski in place of guitarist Adam Rogers) to a sextet with the addition of trombonist Robin Eubanks and trumpeter Jason Palmer. Like the previous two nights, this grouping had a distinct character, despite the personnel overlap. Even with the bigger horn arrangement, opener "Candlewood Path" was beginning to sound like an old friend by now, making its third appearance. The big solo went to Eubanks' trombone. The Void has the feel of a collective, as evidenced by "Night View," a composition by bassist Dezron Douglas. A round of solos from trumpet, soprano saxophone and piano led into Coltrane's band introductions.

Coltrane's ballad "Cynthia's Song" (which had been played by the Quartet the night before) included an especially lyrical piano solo from Zaleski. Drummer E.J. Strickland's energy level had slightly overwhelmed the piano solo on the previous tune, but here his brushwork was perfect. Geri Allen's "Swamini" was another repeat from the night before, but with a substantially different arrangement. It opened with a rhapsodic unaccompanied piano—a beautiful nod to the composer's playing of the tune—then the band played the theme rubato. There was space for an unaccompanied bass solo, followed by a round of solos over a contrasting fast swing groove.

The last tune in the regular program went to Robin Eubanks' "The Sum of All Parts," which was first recorded by the Dave Holland Sextet on Pass It On (Emarcy, 2008). A nice contrast to the rest of the set, it opened with a duet for trombone and drums. Enthusiastically called back for an encore, Coltrane announced that they would finally play a John Coltrane tune. This one had the sound of a quick head arrangement: the theme was mainly played by the core quartet, with minimal horn accompaniment. But it was no less exciting.

Ravi Coltrane's Invitation series had a definite trajectory, with each night adding additional instruments and more complex arrangements. But there was plenty of room for improvisation on all three nights, and the material that was repeated was given a fresh treatment each time. An enjoyable and impressive group of concerts.

Nigerian drummer Tony Allen is best known as an Afrobeat pioneer, as former drummer and musical director for Fela Kuti. But Allen is also a fan of jazz drumming, and hard bop icon Art Blakey was one of his first idols. His Tribute to Art Blakey EP (Blue Note, 2017) features a four-piece horn section, but he is bringing a quartet on tour. The set began with the standard "Out of Nowhere" (which is not on the EP). After an intro that found pianist Jean-Philippe Dary doing some muting inside the piano, the rolling arpeggios of trumpeter Bill Hardman's "Politely" emerged. The tune was actually first recorded on saxophonist Lou Donaldson's Sunny Side Up (Blue Note, 1960) before appearing on Art Blakey' The Big Beat (Blue Note, 1960) after Hardman had left the band.

I could not identify the third tune, but it featured a fast walking bass line from bassist Mathias Allamane that had some of the most conventional jazz feel of the evening. Allen made a brief announcement, noting that most of the audience probably knew him for playing "Afrobeat, or whatever." Saying that he wanted to do something different to avoid boredom, he described this music as "jazz my way." He introduced guest trumpeter Rachel Therrien (who had headlined her own show earlier in the festival) before launching into "A Night In Tunisia," the Dizzy Gillespie tune that is heavily associated with Blakey: he recorded several versions of it. The band's arrangements make these hard bop tunes fit into a more Afrobeat-style groove by fitting them into a vamp (for the most part) and then simplifying and altering the rhythm of the melody to fit. So familiar tunes are easily identifiable, but they are different from the usual jazz treatment.

This arrangement began with a riff played on piano and Rhodes electric piano by keyboardist Dary. Tenor saxophonist Irving Acao played the head by himself; because of the alterations Therrien could only supply some stabs as accompaniment. But she more than made up for it with her exciting solo. Dary's piano solo was doubled by his voice, a la George Benson. Next came "Moanin,'" arguably Blakey's "greatest hit." Pianist Bobby Timmons' composition first appeared on Art Blakey and the Jazz Messengers (Blue Note, 1958). The trumpeter exited, and the band launched into an especially rhythmic selection, Dary encouraging the audience to clap along. They rhythm section really got the spotlight: first a solo from double bassist Allamane, accompanied only by Allen's drums; then a final drum solo from the leader.

The encore found Therrien back, playing the bop head in unison with the saxophonist. Nice to finally hear a fuller ensemble sound, a front line typical of many of the Messengers' lineups. It also included an exciting Rhodes piano solo. Many members of the audience may not have known what to expect of Allen's approach to jazz, but they seem to have gone away satisfied.

My final festival concert was an exciting (and impressively ambitious) world premiere of a brand new work composed for the National Jazz Orchestra by drummer/composer John Hollenbeck. He sat center stage facing the 16-piece Orchestra behind a full drum kit. I've never seen a stage set up like this before, but it allowed him to play drums as well as conduct when necessary. The performance lasted about 80 minutes. Judging by the breaks taken between movements (or sections, or whatever the piece calls them) there are four parts, with the last one taking almost half of the running time.

Considerable stylistic ground was covered. The opening section was a chorale, with a modern harmonic language that reminded me of Aaron Copland. It ended with Morse-code like rhythmic repeats. Vocalist Theo Bleckmann (the featured soloist) came onstage for the second section, a song with words about having a great time playing music with a friend who has moved away. In the course of it the brass began rearranging themselves against the back wall of the stage. As the piece progressed physical movement became increasingly important: dramatic as this shift was, it turned out to be only the first of many.