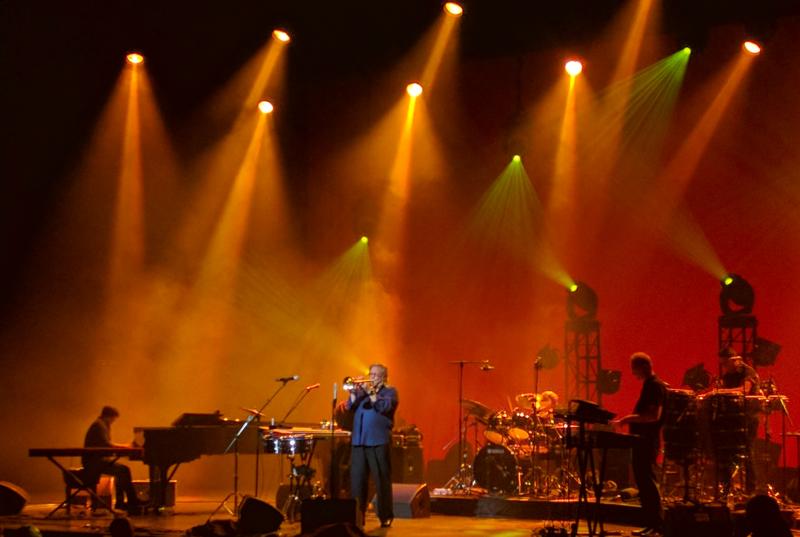 Two more days in the lovely city of Montreal, a paradise for music lovers of all sorts during the Festival. Or anyone who just loves a good street party, for that matter. Last night (Thursday) after the late show I attended the streets were still packed.

The third of John Pizzarelli's three Invitation shows at Gesù. I missed the first two: "Billie & Blue Eyes" featuring Catherine Russell; and "Joni Mitchell & McCartney" featuring Jessica Molaskey. This last was "Sinatra & Jobim at 50," a celebration of the 1967 album Francis Albert Sinatra & Antônio Carlos Jobim (as well as the title of a forthcoming Pizzarelli album which also features Jobim's grandson Daniel Jobim). The show opened with "Baubles, Bangles and Beads," one of the three standards on the original album that had been rearranged as bossa novas. Pizzarelli was playing nylon-string guitar, as he did for most of the show—a more traditional instrument for Brazilian music than his usual seven-string archtop (which he did play occasionally). He stopped to introduce the program, noting that the Sinatra/Jobim album was beaten for the Grammy Album of the Year by The Beatles' Sgt. Pepper's Lonely Hearts Club Band. Also told the story of Jobim taking Sinatra's call at the bar! He introduced the other members of his quartet: pianist Konrad Paszkudzki, bassist Michael Karn, and drummer Andy Watson. Plus special guests: Jobim's grandson Daniel Jobim on vocals, his daughter Madeline on backing vocals and nylon-string guitar, and his wife Jessica [Molaskey] also on backing vocals. So there was a warm, casual, almost family tone set from the start.

They went on to play several songs mostly from the original album: "Agua de Beber;" "Meditation (Meditação)" which led into "Quiet Nights of Quiet Stars (Corcovado);" Dindi;" the Cole Porter standard "I Concentrate on You;" and "Wave." Great songs, delivered with an easy lilt. I did notice that Pizzarelli's solo passages when playing nylon-string sometimes sounded a little rough. A minor nit, and surely only a sign that the archtop is his usual axe. The entire presentation was so genial that it almost switched off my critical faculties entirely. The next group of songs was introduced as not being on the original album, although they are on the new tribute album. Michael Franks' "Antonio's Song" was written in honor of Antonio Carlos Jobim (Franks is also a personal hero of Pizzarelli). Daniel Jobim switched to piano for "Two Kites." And there was one Pizzarelli original: "She's So Sensitive" cleverly included a quote from Jobim's classic "How Insensitive (Insensatez)."

Called back for an encore, the band stuck up what is probably Jobim's best-known song, "The Girl From Ipanema" (which had been quoted earlier in "Antonio's Song"). They concluded with the rousing "Só Danço Samba," which appeared on Pizzarelli's first Brazilian album Bossa Nova (Telarc Records, 2004). An exciting end to a charming show. The sold-out crowd certainly had a blast.

Canadian soprano saxophonist/flautist Jane Bunnett opened this evening's "Programme double" with her all-female Afro-Cuban/jazz group Maqueque (pronounced "Mah-Keh-Keh," meaning "the energy of a young girl's spirit"). Bunnett has a long history of interest in Cuban music, and travels there frequently: her first recording reflecting that was Spirits of Havana (Denon, 1992). Most of the band members are Cuban, so the authentic feel of their playing is a given. Bunnett was delighted to recruit two Canadians to this version of the band: vocalist Joanna Majoko, originally from Zimbabwe; and percussionist Melissa Lavergne, from right here in Montréal.

Bunnett is extremely proud of the group, and it only takes about two minutes to hear why. Opener "Little Feet" from their new album Oddara (Linus Entertainment, 2016) presented precision and blazing energy, inspiring the leader to play the first of many thrilling soprano saxophone solos. "Maqueque" from their first, self-titled album (Justin Time Records, 2014) gave pianist Danae Olano a chance to shine. She spent most of her time accompanying, but she clearly has massive technique: Bunnett mentioned that she recently came in second in a national classical piano competition in Cuba. Bunnett's flute conversed with vocalise solos from both singers—the vocalists also frequently function as a coro (chorus), a frequent part of Cuban music, as well as salsa.

After another original with a strong clave pattern, Bunnett said we would recognize the next tune. It began with soprano sax and piano in duet, and she slyly introduced the melody of Bill Withers' 1971 hit "Ain't No Sunshine" before handing it off to the whole band with Majoko on lead vocals. The arrangement also included an intense soprano saxophone/drum duet with drummer Yissy Garcia, who is an absolute monster—a standout even in this group of exceptional musicians—as well as a terrific conga solo from Lavergne. After playing "Dream" from the new CD, there were two unannounced tunes involving audience participation. The crowd was game for some surprisingly tricky syncopated hand claps on the first. Bunnett succeeded in getting everyone to stand up for the closer, but I'm afraid most declined her offer to dance, despite the seductive dance rhythm provided by the band. Wouldn't have been a problem in Cuba, I imagine!

Cuban-American trumpeter Arturo Sandoval is known as a protege of Dizzy Gillespie (he defected from Cuba while touring with Gillespie). So his show opened with bebop, his trumpet playing in fine form, and it looked like we were in for an evening of Latin jazz. After a hot synthesizer solo from one of his sidemen he put his trumpet down—and did not pick it up again for a long time. First there was an extended scat solo, more impressive technically than musically. Then he suddenly called the music to a halt, berating an audience member in the front row for not smiling, the festival for waiting so long to invite him back, and the lighting crew for being too creative—not to mention salacious comments about singer Joanna Majoko of the previous act Maqueque. Going back to scatting, he did instrument imitations, and finally imitated famous jazz musicians, such as trumpeter Clark Terry's "Mumbles" routine singing with nonsense syllables instead of words.

Then the band launched straight into a funk tune, with Sandoval spending most of the time playing timbales, electronic keyboard, and singing—finally picking up the trumpet again, briefly. After more funk, he went out into the audience to sing the Charlie Chaplin tune "Smile" first performed by Nat "King" Cole. In addition to pointing out the good advice in the lyrics, he advised everyone to leave their televisions off after returning from the concert that night. When he returned to the stage he did play a trumpet solo.

Moving to the piano, Sandoval demonstrated considerable technique on a Latin tune. This doesn't come out of the blue: he once recorded an album on piano, My Passion for the Piano (Columbia, 2001). He then interrupted Duke Ellington's "Take the A Train" to call Ellington grandchildren Andrea and Edward up to the stage to sing with the band. It may have been a surprise to the band and audience, but they seemed dressed for it. They stuck around to sing the final song "Caravan." The band returned to play Dizzy's bebop classic "A Night in Tunisia," which was finally played straight.

Sandoval is a remarkable musician, and his trumpet playing is still a wonder. He even has his high screech trumpet range, although it was used for display rather than for expressive reasons. But he seems to see himself more as a showman than a musician these days, and an incredibly self-indulgent one at that. His extremely competent band was clearly prepared for his shenanigans. Probably not rehearsed, but expected. His audiences deserve better.

Saxophonist Ravi Coltrane began his three-night Invitation series at Gesù with a duo performance with Cuban pianist David Virelles. Coltrane has long since emerged from the shadow of his father, legendary saxophonist John Coltrane. And Virelles seems to be everywhere: recording as sideman with saxophonist Jane Bunnett, saxophonist Chris Potter and trumpeter Tomasz Stanko; and leading his own dates, most recently on ECM Records. Although exposed to various forms of Cuban music during his childhood, his stylistic focus is contemporary jazz rather than Latin jazz.

The duo was playing freely—I never heard an entrance to a tune counted out—but they were playing set compositions. The first piece was "Candlewood Path" by Coltrane (the title is the street where John Coltrane lived from 1964 until his death in 1967). The second was "Efe Dos 12" by Virelles, which began with thunderous piano. John Coltrane's "Expression" was his last studio recording. The duo's performance included a rhapsodic piano solo. An untitled Ravi Coltrane composition found Virelles using an electronic keyboard for the first time in the set, for a sustained organ sound in combination with the acoustic piano. The piece also included an extensive quote from Thelonious Monk's "Epistrophy."

Coltrane picked up his sopranino saxophone for a tune he jokingly identified as "Untitled #73." He switched to tenor for the John Coltrane classic "Crescent," which included an unaccompanied sax solo. Virelles' "Branco Beco" was built on a steady rhythmic pattern, with crazy stuff on top. There was a humorous piano repeating figure which cracked up both players. Called back for an encore, the duo began on soprano saxophone (the first use in the set) and piano, then Virelles switched to an organ keyboard sound and Coltrane to tenor saxophone. It was a beautiful sound—highly appropriate to a cultural center located in a church basement—with the change back to piano bringing things back to a jazz setting.

A lovely, exploratory start to Coltrane's series of three concerts.

Trumpeter Dave Douglas and clarinetist/saxophonist Chet Doxas originally formed the quartet Riverside (with electric bassist Steve Swallow and drummer Jim Doxas) to celebrate the music of clarinetist Jimmy Giuffre. They reconvened to honor the music of composer/pianist Carla Bley on The New National Anthem (Greenleaf Music, 2017). When Bley heard the album she accepted the invitation to join the band for a tour, but insisted "I'm not really a pianist."

The concert opened with Bley's classic "Ida Lupino." As with everything the group does, the arrangement was very conversational: true to Giuffre's chamber jazz approach, rather than head/solos/head. The rest of the program included compositions from nearly the whole group, beginning with Douglas' "Milioson." In addition to being the perfect pianist for Carla Bley music, Bley proved quite adept as an accompanist. Not a lot of notes, but always the right ones. This tour must be the first time in many years that she played in an ensemble not performing primarily her own compositions or arrangements (in her role as music director of the Liberation Music Orchestra, for example).