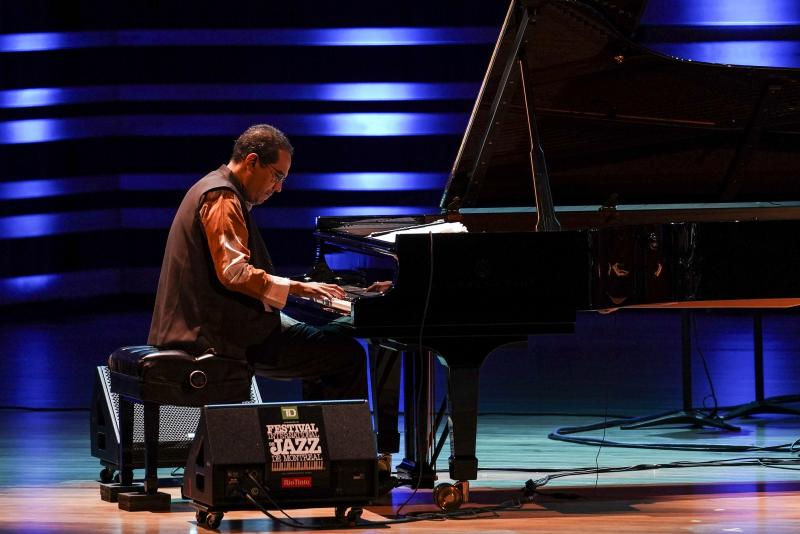 It is a pleasure to be back in Montreal for what many have called "the best jazz festival in the world" (saxophonist Joshua Redman said so last night on stage). One of the nicest things about hearing such a concentrated group of concerts is the possibility of the unexpected. Artists you know may present a different side of their work, and there are always plenty of performers to discover for the first time.

Two concerts billed as a "UK Marathon" began with pianist/composer Gwilym Simcock performing a solo set at the Monument-National, a lovely medium-sized concert venue. The performance opened with a gentle introduction, including some muting inside the piano, moving on to tremolando harmonies. It was sounding like an extended improvisation until the melody of the standard "Every Time We Say Goodbye" emerged. From there a dance rhythm introduced a vibrant closing section which Simcock later identified as an untitled Chick Corea tribute.

The pianist talked about his previous Montreal appearance: a series of flight delays made him an hour late for his own concert!. After the stress of that (including a story about washing up in an airport rest room), he described this occasion as "serene." Certainly his playing displayed an elegant touch and a calm control of the piano and his musical material. He is also an active composer for other ensembles, and the next selection ("Royalty") was adapted from a work for string quartet. It had a stately, very traditionally British sound: stylistically more classical than jazz.

Simcock's early classical training included exposure to Edvard Grieg's Piano Concerto in A minor, Op. 16. He was especially fond of the middle movement (the lyrical Adagio), and wondered if it could not be treated like a jazz standard: it has the same kind of singable melody with harmonically interesting chord changes. Based on his performance, the answer was "yes." The next selection was also an adaptation. When asked to compose an album for the Delta Saxophone Quartet he chose to arrange songs by progressive rock icons King Crimson (who coincidentally were performing later that night: more on that later). It was an unsurprising choice, given that Simcock played in Earthworks (led for longtime King Crimson drummer Bill Bruford) for several years. He also wrote one original as an homage—"A Kind Of Red"—which translated very well to solo piano, complete with some of the characteristic hard rock rhythmic crunch.

Having performed with the late, great trumpeter/composer Kenny Wheeler (a native Canadian, though he spent much of his career in the U.K.) late in his career, Wheeler's "Everybody's Song But My Own" was a lovely tribute. The final piece was the rhythmic "Antics" composed for 50 street pianos (played one at a time!) and dancers for the 50th anniversary of the City of London Festival. His introduction included a humorous story about one of the performances in East London—a rough neighborhood—and the music had a charming, somewhat uncharacteristic rhythmic verve, perhaps recalling Thelonious Monk in places. I have never heard Simcock perform unaccompanied before, so the whole show was a beautiful surprise.

The Portico Quartet concluded the marathon at Club Soda, a dance club that is certainly an appropriate venue for the electronica side of their sound. The band originally became known for a blend of jazz and world music influences, especially their use of the Hang (a metal instrument that is essentially a refinement of the steel drum). After a brief foray into an almost entirely electronic sound they have returned to their original approach—as signified by the return of original member (and Hang player) keyboardist Keir Vine.

But the current sound does include significant electronic elements. Their opening tune was built on a sequencer pattern, with bassist Milo Fitzpatrick playing electric bass guitar, saxophonist Jack Wylie playing through digital delay, and Vine on electric keyboard. When they played "The Visitor" from Isla (Real World Records, 2009) the original sound was in full effect, Vine playing Hang and Fitzpatrick switching to an electric upright bass. It wasn't a huge contrast: the core of minimalist repeating rhythm patterns is still there regardless of the instrumentation. A blend of "Line" (from Isla) and "Rubidium" from Portico Quartet (Real World Records, 2012) continued the approach, although Wylie's saxophones use electronic manipulation to a much greater extent. At one point the delay loops reminded me of early recordings by minimalist pioneer Terry Riley (when he was still playing the soprano saxophone).

Drummer Duncan Bellamy introduced the next group of pieces as part of the forthcoming album Art in the Age of Automation. True to the title, they generally involved sample loops as a base—controlled by Bellamy, who then had the sometimes unenviable job of trying to play live drums in sync. "Objects to place in a line" did include arco bass as well as the sound of acoustic piano, but "City of Glass" opened with what was almost a rhythm sample solo before the band joined in. Call it a work in progress: a band trying to balance the acoustic and electronic sides of its personality. It is still an exciting performing group, warmly received by the Montreal audience.

The reason I only caught the opening and closing acts of the marathon was my attendance at another marathon in between, in the form of the three-hour "An evening with King Crimson." John Kelman will be writing a full account, but as a long-time fan I wanted to mention how terrific the performance was. So powerful as to be overwhelming at times, which I can illustrate with a personal story. A little ways into the first set they launched into "Red"—an old favorite, but one I have no particular emotional attachment to that I know of. But at the start I felt the hair on the back of my neck go up, and suddenly found myself weeping uncontrollably. It's among the most emotional responses I've ever had listening to music, and I have no explanation. But it's certainly powerful stuff.

The first of two acts billed as a "Programme double," the Panamanian pianist/composer Danilo Pérez brought his longtime band mates bassist Ben Street and drummer Adam Cruz. The opening tune began with unaccompanied piano setting the tone—a common approach for this trio. The entire band built slowly—muting inside the piano, muted bass, drum kit played with the hands—until a full crescendo. The piano then set up a new ostinato pattern, joined by the band. I didn't catch the name of the piece, but it had the feel of a suite. "Expeditions" was introduced as a new song. Briefer than the opener, but it too was multi-sectional. "Providencia" got an especially infectious Latin groove going—lots of nodding heads in the audience—and had a big, repeated rhythmic finish.

It being Independence Day in the United States, Pérez gave a little speech about the power of music to build community, a theme which he elaborated on later in the set. He described Stevie Wonder's "Overjoyed" as an appropriate choice. It gave the rhythm section a chance to shine, with Street's bass solo accompanied only by Cruz's drums. After band introductions, they launched into an astonishing son montuno, which the band was demonstrably delighted by: they were clearly enjoying themselves immensely, as was the audience. It included an unaccompanied section with the pianist playing a straight montuno pattern with his left hand while commenting with clusters played by his arms, the back of his hand, etc. At the end the drums and bass traded eights, bebop style. Tremendously exciting.

Pérez announced a Thelonious Monk medley in honor of what would have been his 100th birthday this year. He began with an exploratory solo version of the beautiful ballad "Round Midnight," then the whole trio launched into "Evidence." Solo again, the pianist wove several tunes together, notably "Well, You Needn't" and "In Walked Bud" (Monk's tribute to the great bebop pianist Bud Powell) before the group joined in for a final Latin groove. An exciting end to a joyous performance.

Still Dreaming was inspired by the quartet Old and New Dreams (all former Ornette Coleman sidemen). In this version tenor saxophonist Joshua Redman takes the role of his father, Dewey Redman; cornetist Ron Miles stands in for Don Cherry; double bassist Scott Colley for his mentor Charlie Haden; and drummer Brian Blade in place of Ed Blackwell. This new group (which Redman joked was "a tribute to a tribute: kind of messed up") intends to capture the spirit of the original, rather than playing all old repertoire.

They demonstrated this by opening with two of their originals. "Blues For Charlie" was written for Charlie Haden by Joshua Redman. Redman begin it playing solo, joined by Colley's bass, then the rest of the band. Clearly a blues, but treated very freely. Until it was back-announced Scott Colley's "New You" had me convinced it was an Ornette Coleman tune I couldn't quite place. It had a characteristic start-and-stop theme, and inspired a wonderfully frantic sax/cornet duet break near the end. Redman spoke about his long history with the festival, and the recent Canadian sesquicentennial, along with U.S. Independence Day. Like Danilo Pérez he could not resist making reference to current U.S. politics, which seem to make an event like this festival increasingly unlikely in the U.S. The next selection came from the original band's book: Don Cherry's "Guinea," originally recorded on Old and New Dreams (ECM, 1979). It was fittingly introduced by unaccompanied cornet, the band joining in for the jubilant world music-inspired theme. An altogether joyous performance. They continued with another old selection, Dewey Redman's "Walls-Bridges" (Redman joked that it was OK to applaud the bridges, but not the walls).

Scott Colley's new piece "Haze and Aspirations" featured his beautiful unaccompanied opening. The band concluded the set with two Joshua Redman compositions: "It's Not The Same" and "Unanimity." They left the stage, but the audience would not be denied. For an encore they played Charlie Haden's "Song for Ché" ( a classic from the first Liberation Music Orchestra album), which led into the first and only Ornette Coleman composition: "Ramblin'" from Change of the Century (Atlantic, 1960). A fitting end to a marvelous performance. This band's interaction is a marvel to hear. They truly have the spirit of the Old and New Dreams quartet: all the freedom, and all the joy.

Britain's Neil Cowley Trio had the late "Jazz dans la nuit" slot at Gesù. With a primary instrumentation of acoustic piano, double bass and drums, they look like a conventional jazz piano trio. But they are not called "post-jazz" for nothing, because what you see is definitely not what you get. They frequently integrate electronics into the sound, and even when they're not, their minimalist rhythm patterns have a rock feel. Think of a gentler version of Nik Bärtsch: music based on pattern repetition.