By PATRICK BURNETTE
November 27, 2017
Sign in to view read count 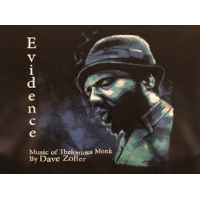 Younger readers may not believe this, but there was a time when all-Thelonious Monk tribute albums were a rarity. During most of Monk's lifetime, musicians focused on a few of his best-known tunes ("Round Midnight" was—and remains— the obvious favorite). But then Steve Lacy, Roswell Rudd, and other champions of Monk began to devote whole albums to his music and countless jazz musicians have followed in their wake. Now Monk may be the central composer in the jazz canon. Everybody loves Monk. Everybody plays Monk. I haven't counted, but I suspect in the last thirty years more tribute albums have been dedicated to his music than that of Duke Ellington.

These circumstances make yet another entry in the crowded field of Monk tributes a hard sell. Some musicians address the problem by fielding combos with instruments Monk rarely or never employed: clarinet, say, or electric guitar. Others chase the elusive goal of "scaling up" Monk's music for large ensemble (Monk was involved in a few such projects, using outside arrangers with mixed success).

Pianist Dave Zoller takes a tougher route with his double CD Evidence—Music of Thelonious Monk. A crowd-funded project released on his Dpzjazz imprint, Evidence features piano, bass, drums, and tenor/soprano saxophone—the format of Monk's best-known ensemble (though Charlie Rouse stuck to tenor exclusively). As Zoller explains in his liner notes, the first disc was recorded in 2012, while the second disc was completed in 2017 after he recovered from a series of strokes. During the interval, the saxophone and bass chairs in his group rotated.

Zoller first became fascinated with Monk's music back in his Army days when he jammed with saxophonist Lew Tabackin on Monk and Coltrane tunes. Zoller demonstrates Monk's pianistic influence as a motivic improviser, but he never apes Monk's mannerisms. He favors clarity and directness in his soloing, which must have helped in his years as a musical director for Al Hirt. Surprisingly, his playing is almost as strong on disc two as it is on disc one, despite the strokes he suffered.

The most memorable and successful performances on Evidence bring new rhythmic ideas to Monk's tunes. "Rhythm-A-Ning," which opens disc one, begins with a throbbing bass pedal point before finding release when the tune is finally played. "Bright Mississippi," a contrafact of "Sweet Georgia Brown" from the Columbia years, gets a New Orleans front- line treatment, while the group performs "Let's Call This" with a rock-steady beat that brings a new dimension the song. Tracks like these show that fresh ideas can be brought to Monk's repertoire even with a sax-rhythm quartet.

More traditional takes on compositions such as "Round Midnight" and "Straight No Chaser" are effective, but less memorable. A ruthless editor might have paired these two discs down to one, focusing on the performances with the freshest arrangements, but this generous edition lets every listener pick favorites for him or herself.

Drummer Woody Berner does not sound like Ed Blackwell, but he has a similar gift for conveying joy and ebullience in his playing. Pete Gallio actually resembles Rouse on tenor, with that distinctive chesty hoarseness in his tone, though he's fleeter. Aaron Irwinsky on the second disc is not quite as nimble but does fine work. Jonathan Fisher (bass on disc one) suffers from muddy recorded sound, a problem largely corrected on disc two, where bassist Jeffrey Eckels is more consistently audible.

On this hundredth anniversary of Monk's birth, it's tempting to think that he's become so canonized he doesn't need any more tribute albums. His reputation is secure, his compositions a cornerstone of modern jazz. But as Dave Zoller's album shows, musicians still need to celebrate Monk—the role he's played in their development, the joy his songs have brought to their lives. If you are ready to give a straight-forward but heartfelt exploration of Monk's music a listen, Evidence will not disappoint.