By Geno Thackara
November 27, 2017
Sign in to view read count 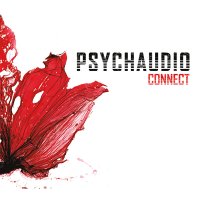 Is the "psych" in PSYCHAUDIO meant to imply psychedelia or something more scary like psychosis, you ask? The answer turns out to be bit—only a bit—of both. The New York City quintet doesn't go completely off the rails on their debut release, nor do they dive completely into trippy headspace. The lineup is that of a conventional jazz group, a double-horn frontline and bass/drums rhythm section anchored by piano in between. They're also willing to get somewhat wild, though, and expand the sound with a light sheen of electronic weirdness.

Appropriately for a group that likes turning the obvious on its head, Connect starts with the opposite of a breakdown. They spend almost two minutes weaving almost aimless sounds and suddenly converge toward a striking downbeat, at which point they're off and running through a super-tight electric fusion groove in 9/8. The title "Rush Life" may be an obvious nod toward John Coltrane, but the tune is the complete inverse of any slow, sensuous "Lush Life" you've ever heard. The group flies through the twists and turns of drummer/leader Omercan Sakar's fast-driving composition with the precision of a Swiss watch.

Likewise, "Nardis" is indeed the same standard you're most likely familiar with already if you're reading this website, but its exotic opium-den treatment is light-years away from what Miles Davis and Bill Evans may have envisioned. Caleb McMahon adds a lightly eerie echo to his trumpet while the others create an exotic atmosphere almost bordering on unsettling. The remaining stretch (all originals) continues taking similarly colorful jumps, wandering from jaunty bop-meets-grunge to gripping improv grooves. Through this brisk running time, the group shows their multicultural background as their biggest strength: classy contemporary sax, brash electric bass, old-world gypsy roots, middle-Eastern trance and wiggly electro-static, all melting into one alluringly imaginative pot.