By Ian Patterson
January 19, 2012
Sign in to view read count 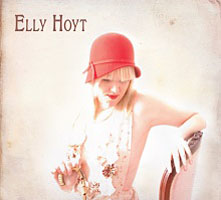 Tasmanian-born Elly Hoyt's self-titled debut catapulted her into the forefront of the jazz scene Down Under, winning the coveted Bell Award for Best Australian Jazz Vocal Album in 2011. Australian jazz is perhaps stronger than ever, with a veritable wealth of young musicians emerging and festivals popping up like 'roos, and this award serves meaningful notice of the 24 year-old's talent. Drawing heavily form jazz standards, these ten selections see Hoyt sympathetically supported by some of Australia's best musicians, but at the end of the day this is a vehicle for Hoyt's seductive voice, and seduce she does.

Duke Ellington/Lee Gaines's 1941 number "Just Squeeze Me" has a delightful intro, with Hoyt intimately accompanied solely by Phil Stack's earthy bass. The arrival of the rest of the group kicks the song into finger-snapping swing mode. Hoyt's slides easily into a sassy scat which combines freedom with control, leading into guitarist James Sherlock's short, tasteful solo. The group returns to the head, where Hoyt's affinity for the blues is evident. On her swinging "Ell's Blues," Hoyt's voice contains the gospel blues of singers Ella Fitzgerald and Carmen McRae. Tim Firth's drums are to the fore and, after a refined solo from Stack, Sherlock ratchets up the rhythm with a short, spicy one of his own.

The spare arrangement of "The Meaning of the Blues" shows that Hoyt is equally assured on slower numbers, and there's a seductive impressionism in her blue tonality on this Leah Worth/Bobby Troup standard. Guest flugelhornist John Hoffman plays a nicely sympathetic solo, with a fragility and brittleness of tone in keeping with the melancholy of the lyrics. Hoffman also illuminates a fairly ordinary rendition of Cole Porter's "All of You," with a warm, dancing solo. More effective as a vehicle for Hoyt's emotive voice is Antonio Carlos Jobim's classic, "Este Seu Olhar," with Sherlock's acoustic guitar, Firth's brushes and pianist Matt McMahon's minimalist touches providing perfectly subdued accompaniment.

The Ned Washington/Victor Young standard "My Foolish Heart" has provided a canvas for vastly different interpretations over the years, from pianist Bill Evans and singer Al Jarreau to guitarist John McLaughlin—though Hoyt's snappy Brazilian samba evokes singer Astrud Gilberto's take, albeit livelier, and features McMahon. Hoyt swings on Hammerstein/Kern's "Nobody Else but Me" and simmers on a wonderfully laidback, drummer-less arrangement of the Nat Adderley/Curtis Lewis gospel-folk number "The Old Country," colored by Sherlock's singing blues lines. Hoyt also makes a compelling case for the possible inclusion of Neil and Tim Finn's "Four Seasons in One Day" in the forthcoming Australian Real Book .

Hoyt's slow-burning "All I Know" sits well among the standards and provides evidence of a songwriting talent which will hopefully blossom. This is an impressive debut from a singer mature beyond her years, one whose distinctive, blues-inflected voice is soulful and quietly commanding. Hoyt is just setting out on her journey, and it's exciting to think that she's only going to hone and perfect her craft in the years and decades to come.

Just Squeeze Me; Este Seu Olhar; Four Seasons in One Day; All I Know; Ell's Blues; All of You; Foolish Heart; The Meaning of the Blues; Nobody Else But Me; The Old Country.