Eliane Elias: The Authenticity of the Groove 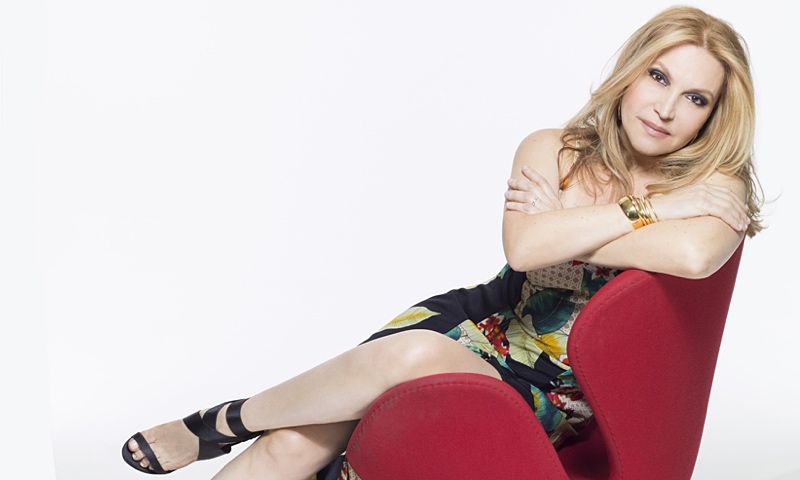 "I was 22 years old and I told Toots Thielemans that I had some tunes I'd like him to listen to," says Eliane Elias, the Brazilian-born pianist, a child prodigy who rose to the upper echelons of music during her time in the United States. The discussion with the famed harmonica player came during a rehearsal in the 1980s. Bassist Eddie Gomez and drummer Al Foster were there. They started in playing her tune "Moments."

Elias herself teared and blushed at that moment in an otherwise hushed room. "I did go through so much," she says softly, but emphatically, from her Long Island home on a frigid February day. She had arrived in the U.S. in 1981 and had played with the renowned band Steps Ahead by this time. This was after studying at Sao Paulo's prestigious Free Center of Music Apprenticeship and, by age 15, ended up teaching master classes there. From there she moved into a musical association with singer/songwriter Toquinho and Vinicius De Moraes, whose work with Antonio Carlos Jobim is iconic.

"You can't imagine a girl being 21 years old and leaving everything behind. I left my country. I left my culture, my parents. I left my siblings, my friends, my life to come for the music," she says. "I came to a new country, America. I didn't speak the language. I didn't know anyone. The only voice I had was the music, that I could present to people."

Present it, she did. Elias brings exciting music to every concert and every project. It might be an intense straight-ahead session with musicians like Jack DeJohnette, Marc Johnson, Billy Hart or Michael Brecker. It could be music with the Latin feel of her homeland and include the likes of Oscar Castro-Neves or Romero Lubambo. Ballads. Tunes with pop influences. Whatever it is, Elias plays with heart, passion and with a deep human emotion. It may carry joy, sadness, intensity, even child-like glee. She's also, over the last decade, added "chanteuse" to her resume, right next to world-class jazz pianist. Her sensual vocals add to all of her projects in recent years.

Looking back on that session with Thielemans, she says, "Believe it or not, I had written things in my 20s that were, in terms of lyrics in Portuguese, kind of mind-blowing. Because I was never 20. I was never 15. I went from probably age 12 to maturity. I did not have the teenager kind of life. I went from childhood to maturity. But what we do gain if life, all of us, is that nothing is static. We are constantly evolving. Life brings more and more experiences, things that we're going through. Speaking about lyrics, I choose to speak about something that is so important in my life. There's something related to the heart, to the feelings of people. Not just mine. Relationships. What people are searching for. Searching for love or searching for happiness or joy. Or lamenting choices that were made in a certain way. Or the dream part of it. Or the sensual part of it. All those different aspects. I talk about love. I talk about them with a lot more life experiences than I had then. But I did have plenty of heart and love experiences, even in my 20s. I went through a lot in my young age, in terms of emotion. I already had the depth."

Elias just released Made in Brazil on Concord Records that visits her Brazilian roots in a new way. She has weaved Brazilian music into many albums, and even done entire projects covering it. But her new recording looks at some of the songs in a different light, adding orchestrations, lush background vocals, and contemporary arrangements, all as a salute to her homeland. It's another outstanding creation, music she will be taking around the world in 2015.

"Made in Brazil starts with me being Brazilian. I'm made there," she says proudly. So was the basics of the music. She recorded it there—her first recording done in Brazil since she left the U.S.—with mostly Brazilian musicians (co-producer and longtime collaborator (Marc Johnson is on bass). Orchestration was added later. Elias was thoroughly involved with every phase, including six new compositions, the orchestrations, the arrangements, choosing the players and wearing the producer hat. A labor of love. The music of different moods and textures shines. She worked hard creating new songs and lyrics to add to some of her favorite songs from other writers.

"I love harmony. I always loved harmony and I studied it deeply. If I may say, I can use harmony to bring out the emotion that I feel," says Elias. "Then I add words to it. But words are supported by emotion that the harmony and the melody that has brought me to it. It's a combination of all of that. That's why people that don't understand the lyric, they still go to the concerts. They are sometimes caught in tears, or caught feeling emotional. It's because the combination of the whole thing."

"I find it something special to be able to do this. To have the vision and to bring this music and have the orchestrations really adds something so beautiful," she says. "It was a very, very special experience for me. I created all the music while I was in Brazil. Wrote all the music. Arranged everything. Then recorded all the basics. It's different. Being there at home. Hearing the sound of the Portuguese. It was summertime. There was a great vibe with the musicians. Everything was very special. And the music is our language, the language of everyone who played on the record. Very special... There was nothing that was done on the record I wasn't a part of and that I wasn't present for, and that reflects the vision that I've been carrying for the music."

This elegant musician has no problem balancing all those duties. "I am very, very focused. Too focused," she chuckles. "It was not hard to keep it focused at all because the music that is conceived first starts inside of me, inside of my head. What I like to hear. Doing it is just making it come to life."

After the songs were done—by musicians including electric bassist Marcelo Mariano; guitarists Marcus Teixeira and Roberto Menescal; drummers Edu Ribeiro and Rafael Barata; and percussionists Mauro Refosco and Marivaldo dos Santos, as well as bassist Johnson—Elias wanted to add an orchestra and other elements, including background on some selections by the vocal group Take 6. She was also on the road during that period. "That was hard because I didn't have any time off the whole year. If I wasn't on the road, then I was working on the record. It's record that has orchestrations, voices, strings. so you have to be very careful in mixing, making sure everything is there, the balances are right. The arranging. Making sure how much of each thing to put in."

The orchestrations were done with the help of Rob Mathes, who had done work on two other albums by Elias. It was done by the London Symphony Orchestra in the renowned Abbey Road studios in London.

Choosing the material, she said, came in a natural way. "I recorded the tune 'Brasil' as an instrumental many years ago. I opened a CD with it, a completely different version. It's almost a Brazilian anthem. It's a tune the people recognize and I know I did a special treatment on it." She also selected music by Ary Barroso and Jobim. "Because I'm there with the Brazilians, you can feel the authenticity of the groove. The language that we all speak together. The rhythmic interaction between my piano, my voice, the drums, the bass and the guitar. It's a dance. It's a great groove."

Among the tunes is the popular Jobim composition, "Waters of March." This version takes the song to a different place. More upbeat. She says the song is the most covered song of Jobim, even more than "Girl From Ipanema."

"I'm especially proud of the arrangement and really excited to present Take 6 singing with me on this and the way the tune travels. The moment I presented the arrangement, the musicians were freaking out. 'What did you do? Wow. This is a total surprise!' So there was that vibe from that," says Elias.

"Promessas" and "Este Seu Ohlar" are done as a medley. The songs have the same chord changes in Elias delighted in cleverly combining them. "That combination was very clear for me to do. I used to sing them when I was young. My grandmother would sing one and I would sing the other. And vice versa. It's part of my upbringing and life music. That tune, the way you hear it is the way we played it. The way I sing is the way I sang. There was no fixing, no changing. It was one of those moments where you capture all of the essence—the musicians, the tune, the vibe—just like that. Pure."

She sang "Voce" with Menescal, whom she calls "one of the last bossa nova creators that is still alive. It was beautiful to have him on the recording. It was adorable the way we sang and the interaction we had at the end. [the two are playful back and forth as the song fades out] We left it like that. It's a smile. Really sweet."

Elias is very happy with the project borne in the historic birth place of bossa nova and other beautiful forms of music. "Some of the music is very joyful. That I believe will bring joy and a message of happiness and hope," she says. "But there's also romance to it. There are moments of sensuality. There's also a little bit of humor. I want to be inside of their homes, inside of their cars, inside of their lives and bring to them whatever feelings they can experience with it. There are moments that are very touching. 'A Sorte do Amor' is a tune, for those that understand Portuguese, that has a very serious message that has a lot of depth in the words. The music came out in a very touching way for all of us when we did it."