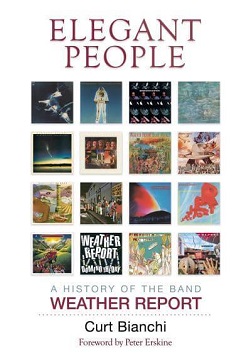 Few bands hold a place in jazz history quite like Weather Report, the band formed in 1971 by Joe Zawinul, Wayne Shorter and Miroslav Vitous. The term "jazz-fusion" could have been coined for Weather Report, yet it was never an entirely adequate descriptor for a band that absorbed so many influences and evolved accordingly over its fifteen-year existence. Jazz, funk, electronica, R&B, rock, soul, and a cornucopia of global rhythms—Brazilian, African and Asian— meant that the music was as tricky to label as it was thrilling to behold, especially in concert.

Curt Bianchi's biography of Weather Report is, in large part, the story of founding members Zawinul and Shorter, the only two musicians ever-present during the band's lifetime. Their backgrounds couldn't have been more different. Zawinul, the conservatory-trained Austrian boy, grew up under the air-raids of WWII; Newark-born Shorter, with a passion for comic books and films, came a little later to music but would graduate with a degree in music education. Bianchi does not dwell overly on their respective upbringings, but enough to paint them as chalk and cheese.

Previous biographies and interviews have already recounted their respective journeys as sidemen—Zawinul in the bands of Dinah Washington and Cannonball Adderley, Shorter with Art Blakey's Jazz Messengers and Miles Davis. Wisely, the author acknowledges these waystations along the way—and others—without getting bogged down. Fully 350 of the book's 430 narrative pages (excluding bibliography and discography) are reserved for the band in question.

Throughout Bianchi's telling of the Weather Report story, Zawinul and Shorter's roles are unchanging. Zawinul: fiercely determined, combatative and uncompromising; Shorter: quiet, non-confrontational and poetically enigmatic. Little wonder the music they made together was so one-of-a-kind.

Where it is almost possible to imagine Weather Report's existence with another saxophonist in Shorter's place, it is impossible to conceive of the group without Zawinul's musical drive and ingenuity. Shorter comes across as a sounding-board for Zawinul, a silent partner off-stage and a painterly presence on it. Were it not for the effusive praise of Shorter's bandmates, his contributions to Weather Report might otherwise appear somewhat marginal.

That impression, right or wrong, is reinforced by Zawinul's domineering personality. The ever-revolving door of drummers and percussionists—at least twenty-three— attests not only to Zawinul's restless compositional mind, but also to his abrasive and provocative nature. At one rehearsal, the keyboard maestro's incessant demands were too much for drummer Herschel Dwellingham, who, in a red mist, pinned Zawinul against a wall.

Zawinul's handling of the band members often comes across as cavalier at best and manipulative at worst. The author recounts various instances of musicians not knowing if they were in or out of the band. A drummer would turn up to the studio only to find another drummer already there. Percussionist Robert Thomas Jr., who was in the band for two years at the beginning of the '80s, was let go without the courtesy of a phone call. In the band's early days, more than one musician recorded on an album without being credited.

And for the poor old drummers, being in Weather Report—in spite of the musical highs—was always a trial, as Zawinul chased rhythms that only he could hear. Omar Hakim, Weather Report's drummer from '82 to '86, said of Zawinul: ..." there were times when he was a very difficult character to deal with."

But there was evidently method in Zawinul's madness. Shawn Hart, who became Weather Report's road manager in early 1974, states that, "the demands that he made on the rest of the band were so instrumental to their success." And Weather Report certainly became successful, with most albums in its '70s heyday shipping hundreds of thousands of units.

Commercial success was matched, for the most part, by critical acclaim, with many critics dazzled by the music at the same time as being unsure quite how to categorize it. Weather Report's concerts—laboratories of open-ended improvisation—soon attained legendary status, especially in Europe and Japan where the band was adored.

Bianchi addresses the Jaco Pastorius years in some detail. Hailed by many as the greatest bassist ever, in what Zawinul called "the greatest band in the world," Pastorius had the world at his feet. His increasingly erratic and disruptive behavior, fueled by alcohol and drugs, was the result of a bi-polar disorder that went undiagnosed for years. His turbulent life, cut short in brutal manner by a bouncer, makes for ultimately sad reading.

That Pastorius lasted six years in Weather Report, despite frequently butting heads with Zawinul, reflects not only the fondness for and esteem in which Zawinul held Pastorius, but the extent of the musical contributions the bassist made to the band. For Zawinul, the music came above everyone and everything.

Zawinul's hunger for the endless sonic possibilities that new technology offered was central to his and Weather Report's evolving sound over the years. Tech-heads, particularly, will revel in the detail that the author goes into describing the workings—and pitfalls—of Zawinul's gear—the Oberheim polyphonic synthesizer, the Prophet 5 Synthesizer, the E-mu Emulator, etc. Despite all the high-tech wizardry, it is somehow reassuring to learn that Zawinul would plug a matchbook between his keys to effect a drone sound.

Exhaustively researched over many years, Bianchi interviewed just about every musician who ever set foot in the studio of a Weather Report recording or who twirled a drum stick on stage—no matter how briefly. Roadies, sound engineers, managers—all contribute layers to the tale.

There is, however, a somewhat processional feel to the Weather Report story. This has less to do with Bianchi's telling of it than it has to do with the band's contract to Columbia, which meant that it was tied to a relentless annual cycle of albums—fourteen studio releases in fifteen years—and tours.

That Bianchi's descriptions of Weather Report's final few albums are significantly shorter than those of the band's early-to-mid period is perhaps suggestive of a band that was running out of creative steam. It was Shorter who blinked first, leaving Weather Report to pursue a solo career, and thereby ushering in the fleeting era of Weather Update and the subsequent Zawinul Syndicate, all of which the author covers in a brief but necessary coda to the main story.

Weather Report fans will surely lap up a book that spares no detail. Rich in anecdotes and first-hand accounts, Elegant People... captures the energy and questing spirit of a unique band, steered by Zawinul and Shorter, whose ripples are still being felt all these years later.