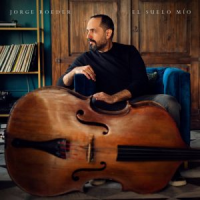 Let's not call it pandemic music. Yes, it is a solo recording, but Jorge Roeder conceived of and recorded El Suelo Mío before this world wide pandemic. The bassist is a member of John Zorn's New Masada Quartet, Ryan Keberle's Catharsis, and Julian Lage's ensembles, to name just a few. He has a sound that is a descendant of both Charlie Haden and Dave Holland, two giants of the double bass whose expressive sounds distinguished them from other bassists.

Roeder, born in Peru, but now a resident of the US for the past two decades, brings a South American influence here, along with his training in classical music. Moreover, he favors a melodious folk take on jazz not unlike that of Haden. His cover of "I'll Remember April"—a tune made famous by Erroll Garner, Stan Getz, and Lee Konitz— dances on the eardrum and chest, possibly because the music is performed by a bassist, but likely whether he is playing Andean dance music "Solo Juntos," Brazilian "Silêncio de um Minuto," or "Thing Thing," his reworking of "What Is This Thing Called Love." His arco bowed cover of Ornette Coleman's "Lonely Woman" reverberates with resounding echoes. Its eerie incantation highlights the unearthliness of the composition. Roeder is playing soul music. These twelve tracks are gifts from his soul to yours.