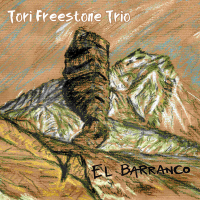 El Barranco is the Tori Freestone Trio's follow-up to their 2014 debut album In The Chop House, released once again on the ever-burgeoning Whirlwind Recordings label.

The chordless sound of the trio evinces a warmth which inevitably invites comparisons with the chief progenitor of this configuration, Sonny Rollins and his 1957 album Way Out West, but Freestone doesn't share Rollins's cutting edge, so perhaps a more accurate comparison might be Albert Ayler whose tenor meanderings on his seminal Spiritual Unity would constitute a template for future trio-based free improvisation.

The album's title derives from Tenerife's mountainous regions known as El Barranco de Masca and these geographical areas are also reflected in the evocative sketches on the front and back of the CD sleeve, expertly drawn by the saxophonist. Freestone's composition "El Barranco" opens with Dave Manington's lone bass, soon joined by Tim Giles on drums and the saxophonist evincing a winsome tenor melody line mirrored by Manington's bass, following which he gives a pithy bass solo. "The Press Gang" is a traditional folk song and here is given a suitably lugubrious treatment, the melody subtly woven in between Ayler-esque improvisation. Freestone's "Identity Protection" is a relatively meaty affair beginning with a more strident repeated riff, reminiscent, in some respects, of the dizzy heights scaled by John Surman, Barre Phillips and the late Stu Martin in their short-lived but illustrious trio.

The standard "All Or Nothing At All," arranged here by Freestone, effectively deconstructs Arthur Altman's song made famous by the likes of Frank Sinatra and Billie Holiday. By contrast Dave Manington's "Challenger Deep" is a sombre dirge-like affair with Freestone plumbing the lower registers of the tenor. Manington also composed the spiky "Quetzalcoatlus," which sounds like a made-up title but is in fact the name of a huge flying animal from the late Cretaceous period.

The languid Freestone composition "Cross Wired" sees the tenor and bass sinuously crossing over each other's lines whereas "Cross Wired," again by Freestone, benefits from an often-repeated memorable melody over a moderate tempo. The album closes with a plaintive outlier, a repetition of the second track "The Press Gang (Reprise)," but this time performed as a song, where Freestone is heard on vocals and violin, accompanied by Manington on bass.

The main strength of this album is the feeling of space , also reflected in the album's title, which contrary to contemporary proclivities, tends not so much to overwhelm as to absorb the listener, and makes for a singularly refreshing change from the current propensity to dazzle with compositional complexities and ostentatious virtuosity. The three musicians gel together perfectly, exuding skill and harmony within an all-too-rarely heard chordless formation.

El Barranco; The Press Gang; Identity Protection; All Or Nothing At All; Challenger Deep; Quetzalcoatlus; A Charmed Life; Cross Wired; Press Gang (Reprise).