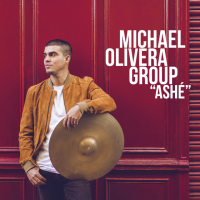 While the rest of the world might not have noticed, there has been a continuous cultural exchange between Cuba and Spain for some time now. Due in fact to the historical connection, and that language is no problem, many Cuban musicians have found a haven in Spain to expand upon their talents in the burgeoning jazz scene. Drummer Michael Olivera was born in Santa Clara, Cuba, and after extensive studies and performance opportunities, relocated to Spain, where he is a sought after accompanist. Ashé is his first venture as leader, and is an amalgamation of his vast and varied influences.

The word "Ashé," is derived from the Yoruba language, represents the life force, and a blessed greeting. They begin the session with this thought in mind, the song being authoritative, yet the warm vocal incantation of Miryam Latrece introduces a warm forgiving aspect. The romantic foray "Campesino y Campesina," was produced into a video depicting the simple and timeless act of searching and falling in love. Inspiring bass lines by Munir Hossn, offer a lenient foundation for the refreshing melody.

The Trilogia (trilogy) section is a three part composition portraying the Spanish influence upon Cuba and its people. Many of the island's festivities were originally centered on religious holidays and the piece is comprised of: "Guajiro," with Olivera offering a prayer of sorts to those who worked the land; "Llanura" a nod to the vast plains in Cuba where sugarcane was planted; and "Andaluza," returns back to Spain, as heritage goes full circle.

The dramatic introduction in "Ganas De Vivir," leads to a virtual Arabian sequence of harmony and imagery. Gabi Casanova on the Hammond organ brings a modern jazz injection into the arrangement; as the voice of Latrece and sax work of Ariel Bringuez transport it into an uplifting spiral. The tremendous display of natural power in hurricanes is the theme for "Ciclón Tropical," and "Tornado." The songs move up and down the intensity scale much like the actual storms as the wind rises and falls in the process, whipping the rain into a relentless wall of water. Nice utilization of melody, tempo and drama to depict one of nature's most potent phenomena.

The swaying Latin cadence of "Raíles," features dazzling trumpet phrasing from Miron Rafajlovic, a special guest who performs with grace and swing. The John Coltrane recording,"A Love Supreme," turns fifty in 2016, so the Olivera group pay a respectful homage on "Pt.1-Acknowledgement— Tributo A "A Love Supreme." Sax man Bringuez steps into the imposing shadow of Coltrane and blows his heart out for the sets closing number.

As with most leaders who are drummers, Michael Olivera is democratic, and allows his bandmates ample room for expression. His drumming is determined and can be sparse and light when need be; Cuban roots evident in his impeccable sense of time. This is a riveting debut release, exhibiting sophisticated and complex original compositions, with thematic arrangements and concepts. A solid example of the ongoing Cuban-Spanish musical collaborations, in hopes of more to come.