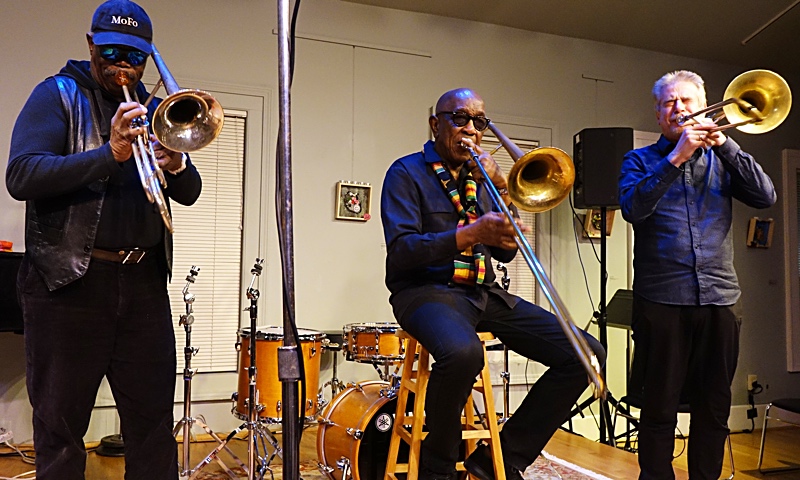 When mid-October rolls around, many fans of avant-garde jazz and creative music prepare to converge on Ann Arbor, Michigan for their annual pilgrimage to the Kerrytown Concert House, home of the Edgefest festival. Now in its twenty-first year, Edgefest has become one of the premier festivals in North America for those interested in the outer realms of jazz, and the adventurous music it offers always leaves audiences exhilarated. With a relatively small, 110-seat venue, the Kerrytown stage provides an intimate atmosphere that is perfect for an up-close encounter with some world-class musicians.

But what makes Edgefest truly exceptional is not just the superb music it provides over four days. Going further, the festival sponsors numerous workshops and clinics, often by partnering with the University of Michigan and its faculty and students, as well as with local high schools and even middle schools. Additionally, "Fringe" performances at other venues around town provide even more opportunities for audiences to experience the music. In short, Edgefest strives to cultivate a spirit of community, both within the ranks of the Edgefest faithful and with wider Ann Arbor, a commitment exemplified by the traditional Edgefest parade each Saturday afternoon, where locals can join in the fun as Ann Arbor's own version of a New Orleans "second line" marches its way through town.

The theme for this year's Edgefest, "Drums Along the Edge," which ran from October 18-21, allowed the festival to highlight the contributions made by drummers and percussionists across the wide swath of today's creative music scene. With long-established veterans like Pheeroan AkLaff, Tom Rainey and William Hooker, and next-generation dynamos like Tomas Fujiwara, Harris Eisenstadt and Allison Miller, there was a terrific cross-section of talent on display, and each night's performances had plenty of standout moments.

Wednesday evening began with one of the more unusual line-ups of the festival, as percussionist Michael Gould teamed up with actor/director Malcolm Tulip for "Remember Me": an imaginative, wry, and sometimes profound re-thinking of "Dido's Lament" from Henry Purcell's opera Dido and Aeneas, using the poems of Ken Mikolowski as text. The duo were joined briefly at the outset by Edgefest director and mezzo soprano vocalist Deanna Relyea and cellist Katri Ervamaa, who delineated the classical foundation of the aria, before Tulip's expansive vocalizations and Gould's broad array of percussion techniques and computer-generated effects took the performance into the realm of the surreal. Although a meditation on finitude and death's inevitability might not at first seem to offer the most inspiring thematic material with which to launch a festival, Tulip and Gould brought a defiant creativity to their collage of vignettes, and Gould effectively demonstrated that this would indeed be a drummers' festival.

Gould's "Remember Me" was followed by a trombone trio featuring Steve Swell, Dick Griffin, and Joe McPhee (playing valve trombone). For fans more accustomed to seeing McPhee on the saxophone or trumpet, this opportunity was a treat, as he has a graceful, nuanced approach to the trombone, one that meshed perfectly with Griffin and Swell. The group offered three long improvisations, with plenty of room for syncopated exchanges and energetic bursts, although the prevailing mood was one of restrained dignity, as the three musicians found harmonic possibilities that at times were almost hymn-like in their stately beauty. Griffin's own unaccompanied solo improvisation was especially impressive, as it featured his "circularphonics," using both circular breathing and multi-tones, and he might have been considering the current political climate as he offered a quote from the civil rights anthem "We Shall Not Be Moved" during his solo. The three musicians' camaraderie and mutual respect were evident throughout their 45-minute performance.

Finishing out the first night was the trio of drummer Pheeroan akLaff, bassist Julian Thayer, and multi-instrumentalist extraordinaire Scott Robinson. With characteristic warmth and geniality, akLaff explained in his opening remarks that the idea behind the group's music was to "strengthen unity and purpose to bring peace to the planet," and he dedicated the performance to sculptor Rob Fisher, someone he honored as having been a partner and mentor to all three musicians. There was an innate spirituality to the group's music. Starting with Robinson's long, almost sub-audible notes on contrabass saxophone, the trio started in a meditative vein but gradually raised the intensity level, as Robinson's expanding phrases and explorations of the lower register of the instrument generated momentum. The group seemed most at home in a loose, free-bop context, with abundant opportunities for Robinson to stretch out on his panoply of instruments: in addition to his contrabass and tenor saxophones, he made especially memorable use of a theremin, where his otherworldly excursions took the music into another dimension altogether. But when all was said and done, Robinson's far-ranging facility was perhaps most convincing on tenor: when he got especially revved-up during one of his more invigorating solos, it brought the house down.

Thursday night's programming represented the wide gamut of stylistic approaches for which Edgefest has become justly celebrated. Drummer Jonathan Taylor brought his quintet of Detroit-based musicians to kick things off with a flourish, as the group's heady and challenging compositions struck a balance between form and freedom. Double-threat Molly Jones, who played both soprano and tenor sax, made a terrific two-horn team with tenorist Marcus Elliot, as the pair frequently alternated between fiery surges and soulful interludes. Reminiscent of the inside/outside approach of some of the classic Black Saint label's releases from the 80s and 90s, this was music for both head and heart, always with a bluesy sensibility even during the more adventurous moments of the music. Taylor brought plenty of high-energy technique to his kit, but he always managed to stay in sync with his excellent rhythm team of bassist Jaribu Shahid and pianist Michael Malis.

With his forceful, percussive piano style, Malis put in quite a workout with Taylor's band, yet he apparently had plenty of energy left in reserve, as he shared the next set with the indomitable William Hooker for a jaw-dropping display of improvisational power. Hooker seemed to invite the audience into the performance by walking down the aisle and shaking hands with those he could reach while on his way to the stage, in a sign that something extraordinary was about to happen. Then, using a John Lomax field recording of an Alabama prison work song as a catalyst, he and Malis launched into a number of freewheeling improvisations that harnessed the emotional power of the recording while simultaneously redirecting it. Shouting "Let's Not Forget!" repeatedly at the outset, it was clear that Hooker had weighty matters on his mind—and he played like it, with periodic outbursts and exclamations to spur Malis and himself to greater heights. With a fusillade of intensity, Hooker seemed at times to push his kit to the limits, with Malis matching his vigor with each strike of the toms. Malis has a strong classical sensibility behind much of his playing, but his more untethered statements revealed a barely-controlled fury; combined with Hooker's impassioned and relentless attacks, the result was one of the festival's most riveting and overpowering performances.

After Hooker and Malis came Joe Daley, whose "Tuba Trio" included veteran percussionist Warren Smith and Scott Robinson. Robinson, unlike the previous night's kitbag of instruments, stuck largely to contrabass and tenor sax this time, for a set that brought a contemplative air to the room. Smith went back and forth between vibes and drums for this performance, allowing him to complement nicely the expressions of Daley and Robinson, whose lyrical exchanges were quite compelling in their mixture of melodic and rhythmic sophistication. Daley started off the set on piano, but eventually settled in on tuba and, most heavily, the euphonium. As longtime colleagues, Daley and Robinson have an obvious rapport, feeding off of and echoing each other's lines throughout their hour-long set. Indeed, during a heartfelt moment before the last two pieces—what Daley referred to as the "memorial" section of the set—Daley explained that Robinson and Smith were two of the forces that urged him to continue making music after his wife's passing two years ago, a time during which Daley thought seriously about walking away from his craft. After the trio's beautiful renditions of "Prayer to Naomi" and Don Pullen's "Ode to Life," the audience could be grateful that Mr. Daley is most certainly continuing to make memorable and life-giving music.

The night's closer was drummer Allison Miller's Boom Tic Boom ensemble, an exceptionally tight and infectious sextet. Playing material from its last two releases, 2016's widely-acclaimed Otis Was a Polar Bear and 2013's No Morphine No Lilies, the group navigated its way through Miller's lively tunes with ease, even though three of the players—Jeff Lederer (clarinets), Carmen Staaf (piano) and Tony Scherr (bass)—didn't play on the records. One would never guess this, however, when considering the players' synergy and sheer joy in playing together, as they kept the crowd energized from the first notes of "Fuster," a rollicking, Eastern European-tinged piece that morphed midway into a feisty Latin groove. Miller was having a blast, ranging all over the kit with boundless energy, and the band supplied plenty of zeal of its own, with spirited contributions from Lederer and cornetist Kirk Knuffke, and with violinist Jenny Scheinman adding another melodic layer to the group's sonic palette. By the close of the set, and after a humorous introduction in which Miller recounted her fondness for a Vietnamese pig she once raised as a pet, the group's "Pig Medley" set the bar for music that is simultaneously challenging and accessible. Mixing post-bop and rock-inflected grooves effortlessly, the band's rhythmic and tuneful vitality is contagious and a heck of a lot of fun. One of the highlights of the festival, and a band to keep close track of in the future.