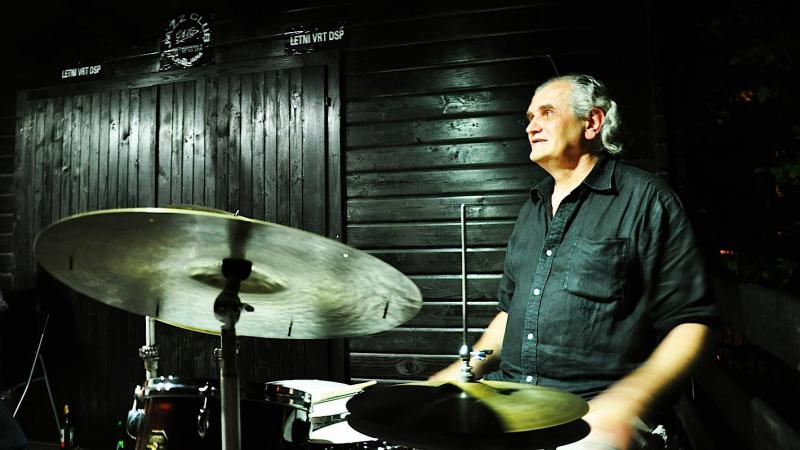 By FRED W. GRETSCH
September 21, 2014
Sign in to view read count
It's said that music is the universal language. And even though it's considered an American creation, jazz music in particular is performed and enjoyed all over the world—including in the central European nation of Slovenia.

For anyone who might be unfamiliar with Slovenia, it's one of the countries formed after the dissolution of the former Yugoslavia. Located at the northern end of the Adriatic Sea, Slovenia is bordered on the west by Italy, on the north by Austria, on the east by Hungary, and on the south by Croatia. In the center of the country lies its capital: Ljubljana. And in the heart of Ljubljana lies Jazz Club Gajo, which is owned and operated by drummer Drago Gajo.

Jazz Club Gajo is currently celebrating its twentieth anniversary. In light of that anniversary I recently had the opportunity to speak with Drago Gajo about his personal history, his unique jazz club—and, I'm proud to say, his love for Gretsch drums.

Drago was born in Ljubljana in 1950. When he was ten years old his father—who was an officer in the then Yugoslav People's Army—led part of the security detail for a concert at which the legendary Louis Armstrong was to perform. "Louis almost didn't show up due to snow conditions," Drago recalls. "We waited for four hours. But it was worth the wait, because it changed my life. I will never forget the sight of a black man, elegantly dressed, constantly wiping the sweat from his face with a handkerchief. And I'll never forget the sound of that trumpet, and especially his vocal interpretations. I can still see and hear him, like it happened yesterday."

Eleven years later, when Drago was a young man playing drums in various garage bands, he went to see an American movie called Zachariah. "It was a very strange 'western,'" says Drago, "in which Elvin Jones played a gunfighter who was also a drummer. He played a drum solo in the movie, and after that, everything was clear to me. What I wanted was Elvin! Not long after, I was astounded by the great Tony Williams, especially on the fantastic Miles Davis album Four And More. What a band! And that incredible drum sound...unforgettable! I consider that album deeply meaningful and inspirational to this day."

Drumming Behind The Iron Curtain

When Drago decided to pursue drumming in the 1970s, Yugoslavia was still in existence as a communist country. Pursuing a drumming career was difficult enough, but pursuing a jazz career was even more so. "Jazz was not considered 'desirable' in Yugoslavia then," says Drago, "simply because it was an American style of music. Yugoslavian political views did not favor foreign ideas. There was a fear of new ideologies—especially imports of American ideology."

Ideologies aside, Drago found ways to pursue his interest. One of those was to visit the library of the American Cultural Center in Ljubljana. "I couldn't wait for the newest American jazz magazines," he says. "I was madly obsessed with anything I could find about Elvin Jones, Tony Williams, and Gretsch drums. I have to confess now that when I returned those magazines, a few pages were often missing."

Back in the 1970s instruments made in America or western Europe could not be imported into Yugoslavia, so musicians had difficulties buying instruments. Some help was provided by neighbors in Italy and Austria. But eventually Drago realized that he simply couldn't get the instruction and experience that he wanted at home. So he decided to continue his musical journey in the United States. "I came to Los Angeles in 1978," he says. "My first friend and mentor there was Billy Moore, who played with Ray Charles among many other artists. I studied at Billy's Studio of Percussion from 1979 through 1982, and I have remained inextricably connected to the Los Angeles jazz scene ever since."

Drago got his professional start with Slovenian jazz sax legend Tone Janša. "Tone is a dear friend," says Drago, "with whom I have repeatedly toured the world and performed at most of the major jazz festivals. For this I am immensely grateful to him. In my career I've recorded and performed with various artists in Slovenia, as well as artists from the ex-Yugoslavia and other parts of Europe. I'm extremely proud to have played with Woody Shaw and Renato Chicco, among so many others. All these records sold hundreds of thousands of copies. In addition, I've led my own jazz quartet and big band for quite a while."

Musicians often don't get to choose where and when to play; they usually have to do whatever they can to survive. Drago's career has been different. "Fortunately," he says, "I've always had the chance to choose my projects. My main focus has always been on my own enjoyment. That is to say, on enjoying the music with musicians who know that time and sound are the two most important things in any kind of music.

"Jazz improvisation is spontaneous, hard to repeat, and unique," Drago continues. "That makes it a source of inspiration that you subconsciously carry with you into various other musical situations. I strongly believe that jazz improvisation is the driving force for the development of new musical styles."

When I ask him what led him to establish Jazz Club Gajo twenty years ago, Drago replies, "Slovenia has a 95-year-old jazz tradition. But it was nevertheless the only country in the European Union without a jazz club. If we had counted on the government to open a jazz club we would have had to wait at least another twenty years. My desire to educate, uplift, and motivate the jazz scene in Slovenia was too strong for me to miss my chance. My family consciously decided to take everything we had and invest in the first—and still the only—jazz club in Slovenia. Neither the government nor anyone responsible for cultural progress in this area did anything.

"We're not sorry for investing money and effort into the club," Drago continues. "The need was great. Since we opened, more and more young players have had opportunities to perform. Today I can proudly say that Club Gajo has produced and supported hundreds of successful musicians—and has put Slovenia back on the jazz map. As we celebrate our twentieth anniversary, we have become a very famous jazz club in this part of the EU."

It's gratifying to me personally that Drago has been a Gretsch player for many years. Even more gratifying are his reasons for that long association. "I've had the opportunity to hear and play many different brands of drums over the past forty-four years," he says. "Out of all of those, Gretsch drums are and have always been my favorites. My musical preference is jazz, my two heroes are Elvin Jones and Tony Williams, and my drum sound is Gretsch. There's a lot of history behind those names, and I'm deeply proud to continue with this amazing American jazz heritage."

My wife Dinah and I recall fondly when we first met Drago, in July of 1989. He was traveling through the United States with his wife Petra and his daughters Nina and Anna, and they came to visit the Gretsch drum factory in Ridgeland, South Carolina. Drago told us that it was "a unique and memorable experience." Since then we've remained in close contact with Drago and his family, and we always try to connect with Drago when he comes to the US to perform. We're pleased to have such a talented international jazz figure as part of the Gretsch family.