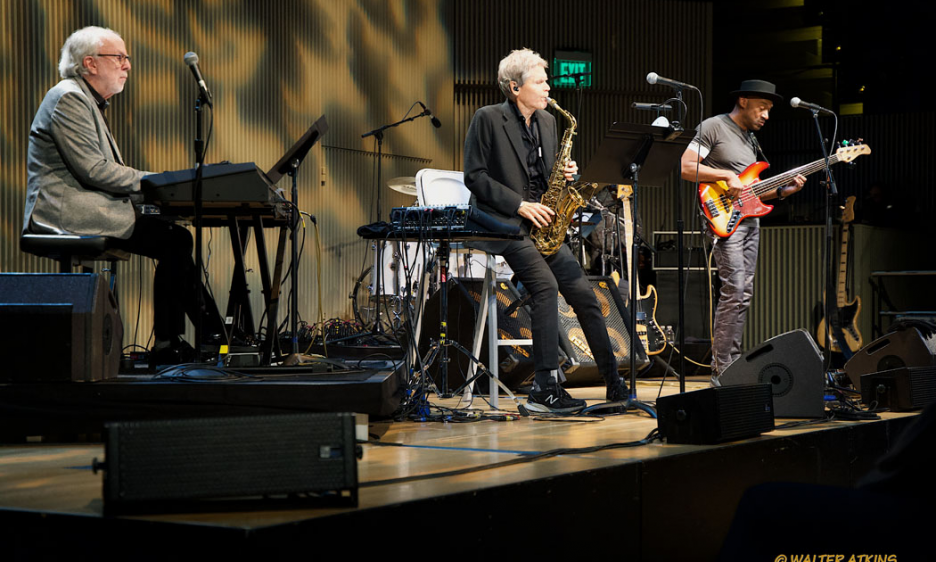 By Walter Atkins
January 25, 2022
Sign in to view read count

[Marcus] Miller reiterated that he was glad to be performing in front of a live audience again and that it was much better than the virtual shows. He stated that when you finish playing, all you hear is silence. Tonight, he saw and felt the roar of the SFJAZZ crowd.
—Walter Atkins

SFJAZZ celebrated the 35th anniversary release of the seminal album Double Vision (Warner Brothers 1986), by Bob James, David Sanborn and Marcus Miller. The group performed the popular 1987 Grammy-winning album with a few pleasant surprises for a receptive audience in the comfortable Miner Auditorium. In keeping with the times, SFJAZZ installed a new state of the art ventilation system in the hall and implemented Covid protocols.

Two-time Grammy winner and UNESCO Artist for Peace Miller came out first and discussed the importance of performing live again post- Covid. The veteran Billy Kilson (Dave Holland, Dianne Reeves, Chris Botti) was already established behind the drum kit on stage. Bassist Miller introduced keyboardist James and then alto saxophonist Sanborn, who was escorted to his seat by his wife, Alice Soyer. As was to be expected the evening's set list included many of the songs from the Double Vision album, plus a few other gems, including James's 1978 hit "Angela (Theme from Taxi)." The house was also treated to some songs by guest vocalist/bassist Bill Braggs (Tower of Power).

In between tracks, multi- instrumentalist Miller shared a few stories and anecdotes about his stage mates. He said Sanborn, a six-time Grammy winner, started in San Francisco with the Paul Butterfield Blues Band in 1967. Sanborn added it was his first paid gig, so he considered himself a "professional" musician. As a youngster, he attended a professional basketball game with the then St. Louis Hawks (now Atlanta) followed by a Ray Charles concert. Now that's getting your money's worth. During the Charles show, Sanborn recounted, the power unexpectedly cut out. The only thing heard was Charles' phenomenal alto saxophonist, Hank Crawford (B.B. King, Etta James, Lou Rawls) playing. In that moment, Sanborn said that he knew what he wanted to do for a career. Mr. Crawford, who was a major influence on the young Sanborn, passed away in January 2009.

Back in the day, Sanborn was writing a song about a current girl friend who broke up with him before the song was finished. Fortunately, he met another woman and she unexpectedly asked him to write a song about her. So, he used the same song that became "It's You." He quickly added he's now "happily married" to his wife.

Miller discussed his admiration for a large picture of Sarah Vaughan he viewed backstage and commented how she was one of the giants. Sassy Sarah, as Miller put it, was known to be very demanding of her pianists. James proudly pointed out that he was the pianist in the picture. The group then performed James' "Angela" from the long-running Taxi television show. The artists also talked about the original plan for a love song that eventually became "Maputo."

Another set highlight was Braggs' moving rendition of the Cindy Walker/Eddie Arnold standard "You Don't Know Me," first popularized by Ray Charles. Miller's extraordinary interplay with the drummer was an exciting sonic experience throughout the night. He quipped that drummer Kilson should be called Killin' it because of his dynamic playing and solid time keeping.

Later in the set, Braggs, who used to perform with the Temptations, covered the Buddy Johnson blues standard "Since I Fell For You," originally sung on the Double Vision album by the legendary, seven-time Grammy winner Al Jarreau. By the middle of the performance, he had a large group of women swooning with pleasure.

The Double Vision Revisited Tour triumphantly closed with a standing ovation for The Temptations' Grammy winner and Billboard number one hit "Papa Was A Rollin' Stone." "Papa" was delivered with pure gusto by Mr. Braggs' vocals along with Miller's polished and powerful bass work. Miller's spectacular arrangement also featured both bassists playing the melody and bass lines together.

Miller reiterated that he was glad to be performing in front of a live audience again and that it was much better than the virtual shows. He stated that when you finish playing, all you hear is silence. Tonight, he saw and felt the roar of the SFJAZZ crowd. The New York visitor commented on how comfortable the artists were with sharing interesting tales from their storied careers. Marcus, an enthusiastic SFJAZZ staff member called the evening's music "timeless." His view was shared by many in attendance as some headed to the nearby Rich Table for a nice meal and music conversation.