The Buddy Johnson Orchestra was one of the most popular R&B based bands during the immediate post war years. Buddy was typical of many bandleaders of the time who often put entertainment ahead of art. By taking that route he enjoyed more hits than most of his contemporaries.

Woodrow Wilson Johnson was born in Darlington, South Carolina, on January of 1915. He took to music at an early age, becoming adept at the piano beginning at the age of five. As a teenager he was active in church and school groups arranging and producing musical presentations in the local community. By the time he was in his early twenties he headed for New York where he soon found work as a pianist with a traveling show called The Cotton Club Revue.

He soon put together a small band that played blues tunes and riff based jump and boogie dance numbers. In late 1939 he secured a recording contract with the oldest of the major labels, Decca Records. His very first recording was "Jammin' In Georgia" and "Stop Pretending" featuring Buddy on vocal accompanied by The Mack Sisters. A short time after Buddy began recording for Decca, his teenage sister Ella joined him in New York and recorded with the band, on the tune "Please Mr. Johnson." Besides Ella Johnson, singer Etta Jones also was a vocalist with the band in 1943 and 1944. Johnson showed off his talent as a composer with two of his original tunes "Troyon Swing" and "Southern Exposure." By the year 1941, Buddy had put together a tight nine piece band.

The band began to have successes for Decca during the war years, with Ella and then new addition Arthur Prysock on vocals. In late 1944 "They All Say I'm The Biggest Fool" with Prysock on vocal was a big seller for the band and it came on the heels of two other big hits "Fine Brown Frame" and "Walk em.” Ella Johnson hit paydirt in 1945with a wonderful vocal turn on a Buddy Johnson original tune that would become an American standard, "Since I Fell For You."

With a string of hit records, two superb vocalists, great original music charts, the Buddy Johnson band was one of the great attractions of the time. They were as popular at the Savoy Ballroom in New York as the Savoy in Los Angeles. They drew sellout crowds in Houston as well as Atlanta - Chicago as well as Kansas City. They were truly America's band, although the majority of America didn't know it.

In broadening his musical horizons, Buddy Johnson penned his complete "Piano Concerto" and in late 1948 had the opportunity to perform the work at Carnegie Hall in New York City. This was coupled with "Southland Suite", another serious side of Johnson's musical talents with vocal work by Ella Johnson. During the next year, the influence of R & B began to take hold and many of the more jazz influenced musicians were embracing the more blues based style of this type of music. The Buddy Johnson band continued to hold forth even as the music began to evolve into what would be termed rock and roll in a few years. He and his band end the year with a sold out engagement at New York's Bop City.

Johnson began the year 1950 with an extended engagement at Philadelphia's Earle Theater sharing the bill with the other Ella - Fitzgerald. The hits continued through the ‘50’s, Buddy changed over to Mercury Records after thirteen years and scores of hits at Decca. In March 1956, Mercury announces that they will move their R & B roster of talent to their new Wing subsidiary label. Included in the move is the Buddy Johnson band. By this time it became clear that the hit making days of the band were over. Rock 'n roll music had become the sound of young America, and teenaged girls were the number one consumer of single records. The more adult blues based sounds of the Buddy Johnson band were no match for the teen obsession with Elvis, vocal groups, and the teen idols now coming to the head of the industry. Even so - the band played on, continuing to grind out performances and were back on the dancehall circuit.

Soon after the turn of the decade of the sixties, Buddy Johnson suffered failing health which curtailed his musical activities. His sister Ella also decided to retire from the music scene and help take care of her brother who had guided her career for twenty years. The big band of Buddy Johnson then passed into history and Buddy passed away in February of 1977. Ella Johnson lived quietly in New York and passed in 2004.

Many music researchers have found that the Buddy Johnson band had very little impact on white listeners. The band and their vocalists were virtually unknown to mainstream music fans, except for listeners back in the day. This band was a prime example of those outfits that built their repertoire and reputation on the road, night after night, show by show, during the golden era of Rhythm and Blues.

The Band that Swings...

Why Don't Cha Stop It 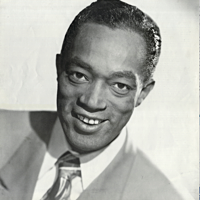 All About Jazz musician pages are maintained by musicians, publicists and trusted members like you. Interested? Tell us why you would like to improve the Buddy Johnson musician page.